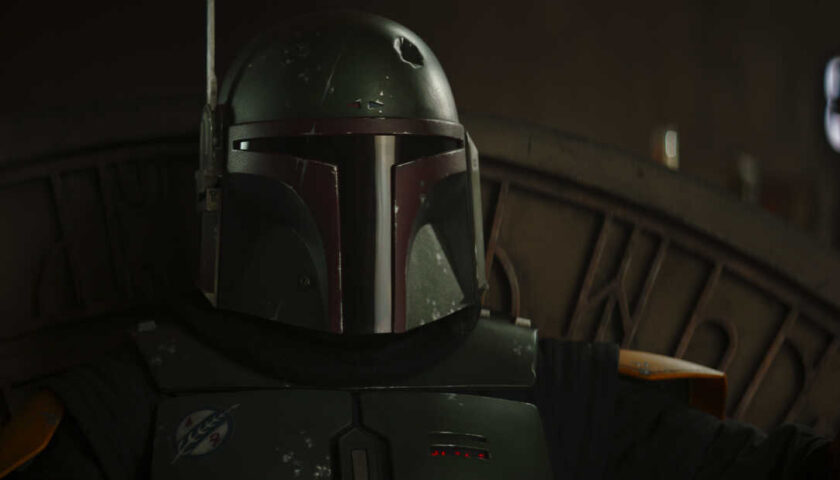 Thirty-eight years after Boba Fett plunged into the maw of the Sarlacc monster in “Return of the Jedi,” the debut chapter of the new Disney+ and Lucasfilm series “The Book of Boba Fett” spent 38 minutes explaining how the titular bounty hunter made his escape. The latest entry from the brain trust behind “The Mandalorian” (and spinning directly off of that series) is very much a fans-only affair, but when a fan base is as deep and wide as that of the “Star Wars” franchise, that’s not too big of a problem.

When “The Mandalorian” premiered on Disney+ in 2019, the Jon Favreau-created show — the first live-action series set in George Lucas’ beloved galaxy far, far away — seemed like an attempt to take several decades of fan fervor for the character of Boba Fett, a mysterious bounty hunter with a great look and limited screen time, and transfer it over to a new lead unburdened by built-up expectations and all that dreaded canon.

And on that front, it largely succeeded. Thanks to a winning performance by lead Pedro Pascal and the absolutely adorable Grogu (a.k.a. Baby Yoda), the show not only tapped into the ineffable “Star Wars” magic, it also carved a place all for itself in the overall canon. And as it happens, that place also contained room for the guy who was the inspiration for the Mandalorian: big bad Boba himself.

Fett made his belated return to the living in the second season premiere of “The Mandalorian,” reclaiming his iconic jet pack and armor as the season progressed and taking over the gangster throne vacated by Jabba the Hutt. As played by Temuera Morrison, this new, older Fett’s weathered countenance bore the battle scars of stories yet untold (most notably how the heck he got out of a desert monster’s digestive tract).

And so, With aide-de-camp Fennec Shand (Ming-Na Wen) by his side, Boba is settling in as the desert planet Tatooine’s reigning criminal capo. But there are plenty of others who’d rather be the boss of bosses. That’s the “present day” story line in “Book of Boba Fett,” but the bulk of the first episode (titled “Stranger in a Strange Land”) is given over to Boba’s flashbacks while healing in a bacta tank, detailing his harrowing journey from inside the Sarlacc to eventual enslavement by Tusken Raiders.

It’s a measure of how deeply wedded the “Star Wars” franchise has become to its own internal mythology that this latest entry lays a trail of callbacks and visual nods — a virtual parade of, “Hey, I remember that!” — as if to cement the fanboy credentials of those making it. (Not that show creator Jon Favreau need worry about that after “The Mandalorian” brought back “Return of the Jedi”-era Luke Skywalker, played by Mark Hamill with some digital trickery, last season.)

Boba Fett has always had a mystique far outstripping his actual presence. Appearing for roughly five minutes over two films, he was always an action figure first and a character second. Nonetheless, he was built up into the ultimate badass by fans, and that in turn manifested in licensed novels, comic books and video games, leading creator George Lucas to ladle his backstory into the “Star Wars” prequels and making Boba’s dad Jango (also Morrison) the progenitor of the clone army at the center of the spoken-in-hushed-tones Clone Wars, alluded to in the original 1977 film.

While that inclusion may have seemed egregious or cynical at the time, it paid off decades later by landing Morrison, a gifted performer who can convey a lot with the merest of arched eyebrows, in this part and finally letting the character on screen match up to his badass reputation.

Not a ton of forward movement happens in the first chapter of “The Book of Boba Fett,” but after “The Mandalorian,” the show’s creators have earned the benefit of letting their slow-burn plans play out over the season’s seven episodes. For the time being, the premiere successfully fills viewers in on the backstory, while centering a newly intriguing main character in a world we know, played by the perfect actor for the job.