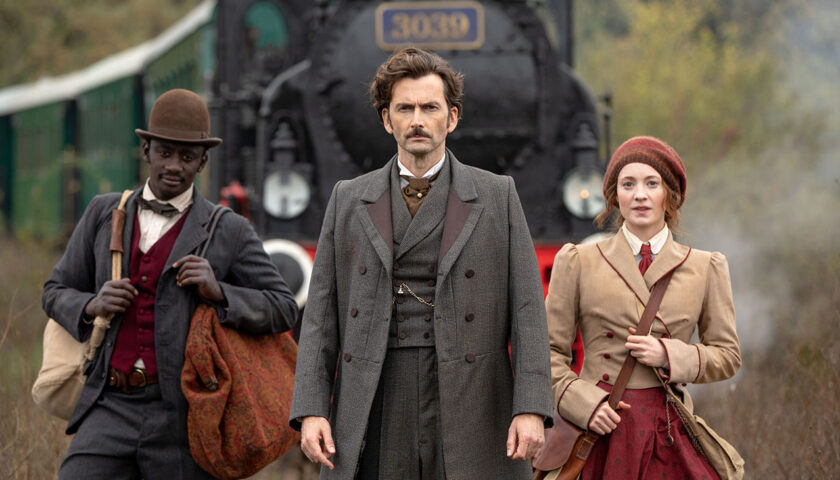 If any new trends catch on in 2022, one should insist on every film or television series justifying its existence beyond its potential to make a profit — especially when it comes to adaptations of IP previously adapted in multitudes. Under those terms, given the eight-episode end product that premieres tonight on PBS, there’s little explanation for this new adaptation of “Around the World in 80 Days,” Jules Vernes’ most adapted work (across television, film, theatre, gaming, and radio). Any new take on Vernes’ classic, even after taking into account that 2022 marks the 150th anniversary of its original publishing, ought to be as adventurous and inventive as the story that inspired it. This one most certainly is not.

PBS’ version opens with three Englishmen of obvious privilege in conversation around a table in a members-only men’s club, wagering whether the pre-passenger-flight-era feat of human ambition and technological marvel implied in the title is achievable. It’s not Elon Musk, Jeff Bezos, Richard Branson, and the new space race, but can you spy the subtle parallels?

It’s England in the late-1800s, and the three men are Bernard Fortescue (Jason Watkins), Nyle Bellamy (Peter Sullivan), and Phileas Fogg (David Tennant), the story’s main protagonist, who makes a wager of £20,000 ($3 million today) that he can circumnavigate the world in 80 days or less. He sets out with his French manservant Jean Passepartout (Ibrahim Koma) and Fortescue’s daughter, Abigail “Fix” Fortescue (Leonie Benesch), to win the wager.

It’s an adventure prompted by a timeless theme: men and the quintessential sources of many pissing contests — ego and money. Sometimes, the consequences are wide-reaching, even if coincidental, and may or may not benefit the greater good. The rules are esoteric, and indeed, it’s a game that’s historically been great story fodder, and how the winner is decided is usually more interesting than who wins. Yet this adaptation fails to reassess themes ripe for reimagining, nor is it structurally or stylistically original.

The Michael Anderson-directed 1956 film starring David Niven and Cantinflas — the most accomplished of all the novel’s adaptations, winning five Academy Awards, including Best Picture, even if its legacy has faded over time — at least attempted to satirize the rich, despite its reliance on stereotypes. And while PBS’ iteration foregrounds class warfare in an early setpiece, it does absolutely nothing with the prompt afterward.

It’s the first episode and France is the backdrop, amid the discontent of a growing working class, years after Jean Valjean was swept into the 1832 Paris Uprising. Flyers that read “Freedom! The day of glory has arrived!” flutter about, as mass protests, which Passepartout’s idealistic brother Gerard (Loic Djani) is part of, consume the city. “They don’t behead rich people anymore,” he teases a flummoxed Fogg, during a series of events that ends with Passepartout witnessing Gerard, and his fellow insurrectionists, killed in what amounts to a blaze of glory.

It all may have been as easy to forget as the series discards it, if Ashley Pharoah and Caleb Ranson, who developed “Around the World,” didn’t invest an inordinate amount of time into that catastrophic event, likely in a bid to suck in viewers in with cheap emotionality.

But it’s all tossed overboard, and by the episode’s final moments, the trio stumbles upon Fogg’s “magnificent flying device,” aka a hot air balloon. And off they go, rising above the violence on the ground.

Along the way, they encounter a variety of obstacles while wrestling with personal demons. Insecurity haunts Fogg. His manhood is challenged, and he’s repeatedly prompted with questions about whether he can actually complete the journey. Ms. Fix is a woman navigating a man’s world, a journalist with a father who prefers she be married with children. And Passepartout, despite being multilingual, intelligent, and possessing various talents that prove useful on their travels, still has to navigate the 18th century as a Black man, and all that entails.

There’s certainly much to chew on there, but it all unfolds with the emotional weight of a leaf.

Fogg, Passepartout, and Fix also encounter a few real-life historical figures, including Jane Digby (Lindsay Duncan), the aristocratic adventurer, and Bass Reeves (Gary Beadle) escorting a fugitive in a post-Civil War America, where Passepartout realizes that any freedoms he may have enjoyed as a Black man in Europe remain taboo in the U.S., even though slavery and racism are also woven into the fabric of the European experience. But the series paints a picture suggesting otherwise.

To the series’ credit, ostensibly progressive edits to the source material are made: Ms. Fix’s gender identity, occupation, and motivation are flipped, turning the novel’s antagonist, Detective Fix from Scotland Yard (who suspects Fogg of robbery), into protagonist Abigail “Fix” Fortescue, a determined writer hungry for a good story. And Passepartout is Black. Additionally, the possibility of romance between them (Fix and Passepartout) is teased throughout, although it never graduates beyond knowing glances and hands touching (even if by accident).

Bellamy is the series’ main antagonist, an unethical man who is secretly bankrupt and hopes to pay off his debts with the money he thinks he’ll win from his bet with Fogg. He constantly manipulates the adventures of the three travelers, thwarting their progress, even if it means they all must perish.

By the end of the season’s eight episodes, loyalties have been tested, conflicts rapidly and mawkishly resolved, and the three heroes become a family of sorts. It’s no spoiler to say that Fogg of course wins the bet, scampering to the proverbial finish line with his co-travelers in tow, in slow motion. The only thing missing is the theme song to “Chariots of Fire.”

“Around the World in 80 Days” is not entirely faithful to its source material, but the original story’s romanticization of England’s colonial past remains, and lands here in an uninspired fashion. This series doesn’t explore the connotations of masculinity it expresses, nor subvert them. The notion of competitiveness, meanwhile, is never explicitly mentioned but is inevitably present in the narrative’s main points of view. Within Vernes’ original work, there are far more intriguing opportunities to engage with the universe he created, whether within the boundaries set by its rules — or outside the box.

To be sure, this new adaptation at least seems aware of the world it’s being released into. Compared to the 1956 adaptation’s Mexican caricatures, Passepartout is given a past, his Blackness is recognized, and he’s of romantic interest to leading lady Ms. Fix. But it’s ultimately a middling, entirely unnecessary new take on Verne’s classic adventure novel, and its main cast seems aware they’re starring in what amounts to an afterschool special. If there’s a throughline, it has something to do with believing in oneself, but it’s a theme that’s been more richly, evocatively explored in so much else.