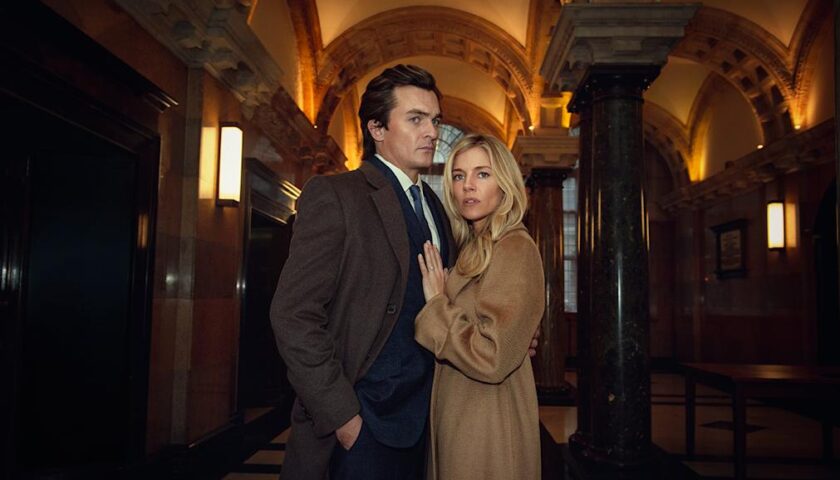 There’s a brutally silly device at work in “Anatomy of a Scandal,” Netflix’s new London-set limited series. At key moments, often the end of an episode, one character or another will become suddenly destablized, a process depicted by them flying backwards in the air or falling down. This sudden shift, we’re meant to understand, is a bit of extreme visual metaphor for what it feels like to be in the midst of upheaval.

That this ends up creating the sense that director S.J. Clarkson didn’t trust her actors to sell the show’s big moments through performance alone may be, from Netflix’s perspective, a small price to pay for extremity. “Anatomy of a Scandal,” which stars Rupert Friend and Sienna Miller as a couple caught up in a political and sexual maelstrom, takes big swings, few of which connect. Despite able performers and potent themes, the show is so addicted to chaos that it squanders its chance to say anything substantive.

The premise is certainly of timely interest: Miller’s Sophie Whitehouse sees her world fall away once her husband, Parliament Minister James Whitehouse, is publicly accused of assault. The legal case that ensues threatens not merely to destroy the Whitehouses’ reputations and lives but to reveal aspects of their marriage about which Sophie had been happier left in the dark. (Flashbacks to the couple’s initial meeting at Oxford illuminate how cosseted in privilege, and how seductive, James can be.) Michelle Dockery of “Downton Abbey” plays the prosecuting barrister who seems particularly zealous about ensuring an end to James’ career, for reasons all her own.

So far, so “The Undoing” — the 2020 HBO show that was also about secrets revealed within a marriage by the legal process. Both that limited series and this one were created by David E. Kelley. Here, though, collaborating with Melissa James Gibson, his eye for sociological detail feels less practiced, as if crossing the Atlantic gave him indulgence to be a bit loose and lazy in his world-building. Neither Oxford nor London come to feel as real as the bourgeoise paradises of upper Manhattan or coastal California through which Nicole Kidman has floated on Kelley’s “Undoing” and “Big Little Lies.” And while “The Undoing” certainly had outre moments, Kelley’s ability to construct a compelling mystery snags on preposterous coincidence from the very first.

Which makes for a somewhat punishing sit. It’s too bad: Dockery, given a challenging role to play, makes you believe in her character’s vindictiveness (if not always the particulars of how she came to be where she is). And Friend and Miller, both of whom deserve a moment, play their halves of the marital duet well. But these performances aren’t anchored against a story with a tether to reality — which might be fine, if the show weren’t simultaneously trying to make real points about the way men in power misuse women. Much like the characters at the action shots that end “Anatomy’s” episodes, we the viewers are left floating, confused, barraged by new information but lacking the context a better-drawn series would provide.