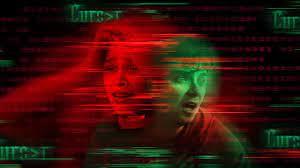 Even the smallest feature-length film is a considerable logistical enterprise, so it’s a bit flummoxing how little thought appears to have been put into “Choose or Die.” While there have been worse-crafted, even more routinely formulaic Netflix horror efforts, this one takes the cake for sheer whateverness of barely-there plot, concept, character detailing and so on. If some movies now seem designed to be consumed on phones, this one demands so little attention, for such scant rewards, you could probably watch it while vacuuming or doing yoga without missing anything important.

Not that first-time feature director Toby Meakins or his cast do slipshod work. But their labors are expended on a “viral” curse premise (à la “The Ring,” “Pulse,” “Unfriended,” “One Missed Call,” etc.) so indifferently defined and developed, the result recalls the archaic term “quota quickie,” which referred to low-budget 1930s British films made by Parliamentary decree just to keep the industry chugging. “Choose or Die” may substitute supernatural deaths for music-hall songs, yet the air of clock-punching effort on an utterly disposable product is much the same.

The opening scene introduces Eddie Marsan as a husband in an upscale home where his wife (Kate Fleetwood) and son (Pete Machale) are at each other’s throats. So dad hides out in his man cave, playing a retro video game that pops up on screen out of the blue, brusquely demanding he make creepy-sounding choices like “his tongue or her ear?” When he refuses to “play,” a sudden din puts him in agony. But when he does choose, the consequences turn out very grim for his argumentative loved ones. And the game will apparently keep dishing out such brutal punishment until he passes it on to another unlucky party.

We then leap to a budget-conscious version of the urban-dystopian Alternative Now in movies like “Joker” and “The Batman,” where society hasn’t quite collapsed but life is generally miserable and harassed. Bright, determined Kayla (Iola Evans) is clearly meant for better things. Right now, however, she’s stuck working as a night janitor in an office building, caring for her drug-addicted mother (Angela Griffin), and hoping they don’t get evicted from their squalid housing-project flat. Kayla’s sole real friend is nerdy Isaac (Asa Butterfield), an aspiring game designer who lives in an even dingier basement cluttered with old tech and scavenged pop-culture detritus.

In the pile is an ancient game called “CURS>R,” narrated by “Nightmare on Elm Street’s” Robert Englund (providing a voice cameo as himself), which the duo figure they might try — perhaps its original prize money was never claimed. But this is the same game that plagued Marsan, and when Kayla fires it up, it forces her into choices with dire results for others: first a friendly waitress (Ioanna Kimbook), then mom, then potentially Isaac and Kayla herself.

This kind of electronic evil has been done before, but familiarity isn’t the biggest problem here. “Choose or Die” is so lazy about articulating the terms (or abilities, or mythology) of its menace, Simon Allen’s script comes to feel more like a preliminary outline padded with temp dialogue. The horror setpieces seem to have been conceived mostly to require no FX or action — certain fates aren’t even shown — and they place an unfair burden on performers who must act terrified or “possessed” in a vacuum of zero tangible suspense.

Why does the game choose particular victims? How does it have power over players’ perception and external reality? Why is it homicidal? Is there any actual point at all? We do eventually meet some kind of evil presence behind it, though they might as well hold a flashlight under their chin and say “Bwah-ha-HA!” for all the elucidation provided.

None of this works, though you have to give Meakins credit for trying to sell it anyway, maintaining a decent pace and some visual interest despite the tissue-thin material. Catherine Derry’s widescreen cinematography puts the best, often luridly colorful face on obviously modest production resources, and an assertive electronic score by The Prodigy’s Liam Howlett is abetted by some ’80s oldies from Gary Numan and Run-DMC. Shot in London, “Choose or Die” nonetheless aims for a non-specific “American city” feel, though not all the cast members apparently got that memo.

Relative newcomer Evans carries the film with more conviction than it merits, her mix of streetwise toughness and increasing distress rather miraculously managing not to grow silly in a story that very much does. Butterfield, however, is so wasted in a stock “dweeb secretly crushing on the cool girl” role, one wonders why he took it. Also getting the short end of the stick is Ryan Gage as a slum-building super whose villainous sleaze is so generic, he might be cannon fodder in a later “Death Wish” movie, his every utterance an invitation to be stomped by Charles Bronson.