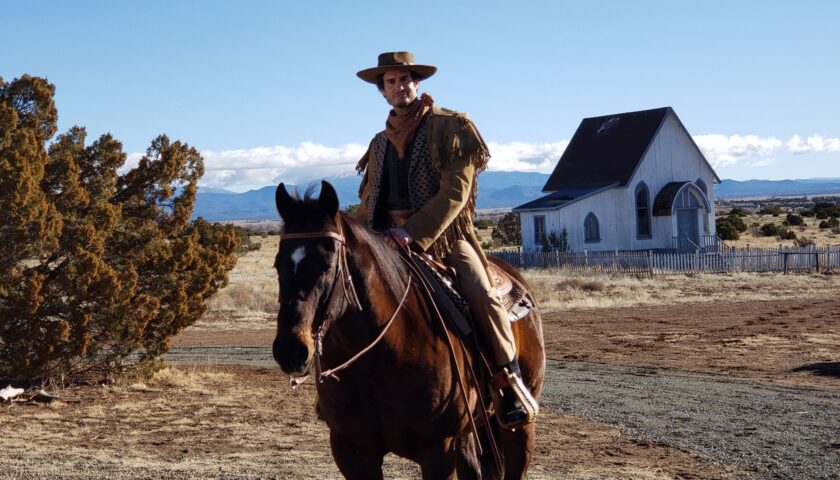 During the early weeks of the pandemic lockdown last year, Western fans were surprised to see a relatively little-known indie-produced entry to the genre, writer-director Justin Lee’s “Badland,” trending in the Netflix Top 10 list, where it eventually peaked at No. 3 on the streaming service’s most-viewed lineup. Maybe it was the allure of a strong supporting cast that included Mira Sorvino, Bruce Dern, Trace Adkins and Wes Studi, or maybe lots of underserved stuck-at-home viewers were even hungrier than usual for some old-fashioned Western action. Whatever the reason, there’s a good chance Lee — whose previous credits include the direct-to-video sagebrush sagas “The Reckoning” and “Any Bullet Will Do” — may be starting to establish himself as a brand name. And the chances are even better that his latest offering, “Apache Junction,” will appeal to the same group of oater enthusiasts who embraced “Badland.”

Once again, Lee prefers to canter rather than gallop as he spins his storyline, allowing his well-cast leads enough time to reveal themselves in sometimes leisurely, sometimes suspenseful dialogue exchanges. To be sure, “Apache Junction” — which premieres Sept. 24 in limited theatrical release and on digital platforms — provides the requisite amount of gunplay, fisticuffs, distressing of damsels and other Western tropes. But there’s a twist or two to the conventions.

Instead of a barroom brawl, for example, we get what can best be described as a prize fight — complete with bell-ringing to indicate the start and stop of rounds — refereed by the barkeep (Thomas Jane, making the most of a small part) when two tough galoots duke it out in a saloon. A sign above the bar, complete with Oxford comma, explains the rules of decorum: “Unjustified Violence, Thieving, And Rape Will Not Be Tolerated. Offenses Will Result In Either Death Or Banishment.”

And the inevitable clash in the street between sworn enemies is pointedly referred to, and carried out as, a duel, not a gunfight. The last man standing? It’s not so much who he is as how he’s able to stand that is mildly surprising.

Stuart Townsend capably conveys virile grit and straight-shooting confidence, along with a heavy hints of self-medication through alcohol, as Jericho Ford, a notorious gunfighter who appears to be first among equals in Apache Junction, an 1881 Arizona Territory town that serves as “a neutral patch of ground” for outlaws in need of a safe haven. “Everywhere else,” a curious visitor is told, “there’s a price on their heads.”

But that visitor, a budding Nelly Bly named Annabelle Angel (Scout Taylor Thompson), is not scared off by descriptions of the dangerous town and its trigger-happy denizens. She even maintains a brave face — or tries to, at least — when warned by the commander of a nearby Army post, Capt. Hensley (Trace Adkins), that he’ll likely be unable to protect her, largely because of his special relationship with the not-so-good citizens of Apache Junction: His soldiers don’t burn the place to the ground, or arrest any of the varmints whose wanted posters festoon his office wall, and they provide his outpost with supplies and, when soldiers do venture into the town, female companionship.

Naturally, this semi-peaceful coexistence is upset shortly after Annabelle starts her investigative reporting.

When three soldiers cruising through Apache Junction attempt to forcibly use Annabelle as a novel change from the town’s sex workers, they are summarily gunned down by Jericho and Wasco (Ricky Lee Regan), his faithful yet often scolding Native American companion. (Some cynics may be tempted to smirk when it’s revealed Jericho and Wasco are longtime housemates, but that’s their problem.) Unfortunately, one of the deceased soldiers just happens to be the son of Capt. Hensley, who visits Apache Junction to announce a bounty on Jericho’s head: “I want him dead or alive. Dead would be preferable.” The dead option is immediately attractive to Oslo Pike (Ed Marrone), a grandiloquent gunfighter — er, duelist — who’s eager to enhance his rep.

Thompson’s occasional awkwardness as Annabelle actually suits her fish-out-of-water character well, as does her shakiness when Annabelle demonstrates how unfamiliar she is with brandishing weaponry. (The film’s conclusion suggests the investigative reporter, after earning her spurs, may be back for a sequel.) As Mary Primm, a golden-hearted hooker with a hankering for Jericho, Danielle Gross breathes an acceptable amount of fresh life into a genre stereotype. Regan leavens his portrayal of Wasco with an affecting sense of melancholy, while Marrone stops a few feet — inches, really — of going completely over the top in his underplaying/overplaying while radiating bad vibes and worse intentions.

And Trace Adkins periodically pops up to effortlessly pilfer scenes while wrapping his honey-dripping drawl around Lee’s dialogue. As Captain Hensley, he projects intimidating authority without relying at all on his formidable physicality — truth to tell, he remains seated throughout most of the movie — and scores devastating impact with growled insults aimed at underlings (“Stay away from big words, Private — they don’t agree with you!”), a bothersome Mary Primm (“Don’t you have a brothel to run?”) and anyone else who displeases him. It’s the latest noteworthy credit on the country music star’s lengthening résumé as an actor, and it will be interesting to see how well he graduates to full-blown lead in the upcoming Fox series “Monarch.”

Production values are impressive for an indie production that had to interrupt filming during the COVID-19 pandemic — at around the same time Lee’s “Badland” was climbing the Netflix chart.