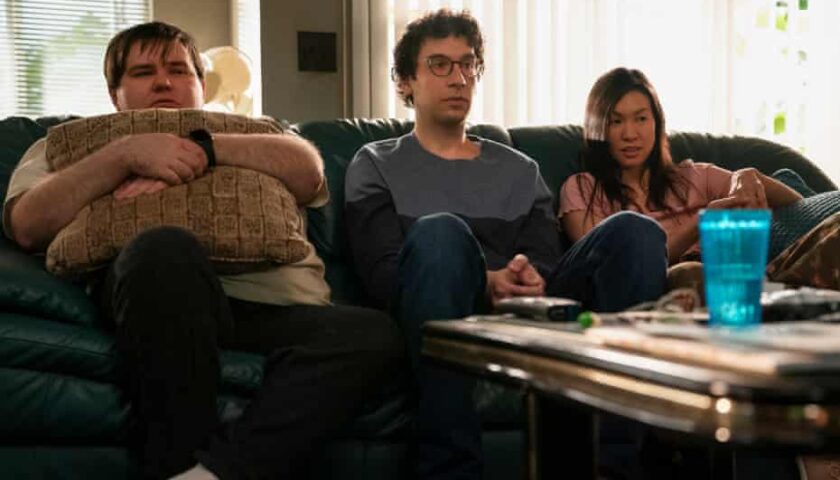 Harrison (Albert Rutecki) need to get outside. Mandy (Sosie Bacon), aide to him and his other roommates Jack (Rick Glassman) and Violet (Sue Annn Pien), gently talks Harrison through a trip down his block to a coffee shop, but his efforts are thwarted when an aggressive dog scares him and he runs back to their apartment building. Jack, meanwhile, loses his job as a programmer when he bluntly tells his boss that he is of “inferior intelligence”, but circles back to grab some muffins from the conference room and ask if he’ll be paid for the rest of this pay period, as he’s had his eye on the latest Roomba model. His superiors are less than thrilled by this exchange. Violet doesn’t have much better luck at her place of work, as she’s demoted to “sandwich technician” after she uses her position as an Arby’s cashier to unknowingly hit on a married man. It’s just another day for this group of roommates, who Mandy helps to set goals and work through their issues one step at a time.

Unfortunately, Mandy’s hit a bit of a wall herself; after being rejected from all the medical schools she applied to, the aspiring neurologist is at a loss. Her boyfriend asks her to move to Berkeley with him, but she seems unsure about it, unable to disappear on this trio so quickly. Against the wishes of her protective brother Van (Chris Pang), Violet goes out for a Bumble date and is quickly abandoned when her date seems unsure of what to make of her. As Harrison finally experiences a huge win and makes it to the coffee shop, Jack arrives home, Roomba in hand, and stoically informs Mandy that his dad has cancer, and that he has to get his job back so he can support himself. Violet, reeling from her date failure and fighting with Van, comes home and melts down, frustrated by Van’s inability to let her make her own choices and her own desires to find someone “normal”. As the trio silently bonds (and starts up the new Roomba) in this moment of pain, Mandy seems resolved to stick around. There’s a lot in store for these three.

Autistic roles have long gone to non-autistic actors, seen time and time again on shows like Atypical and The Good Doctor, and without an autistic presence in the writers’ room, mainstream representation has been less than desirable. By casting three autistic actors as autistic leads, As We See It delivers a long overdue, more authentic depiction of individuals on the spectrum. Glassman, Rutecki, and Pien are simply wonderful in their roles, acting as the heart and soul of As We See It. The writing is definitely strong, but without these three, it’s hard to imagine the series working as well as it does. These are some truly moving performances, equal parts relatable, funny, and heartbreaking, deeply memorable in nature. Glassman is excellent as the serious center of the trio, frankly commanding control of each of his scenes, while there’s a quiet power to Rutecki’s work as he sneaks his way into our hearts even in his more solitary moments. Pien, meanwhile, stands out from the group almost immediately, given some of the meatiest stuff to work with in the script and making a meal out of every minute of it. She’s got something really special, and it’s obvious right away that we’re in for a real treat.

I do worry about the occasionally ableist tone the show strikes, especially when it comes to portraying Mandy, but I have high hopes that the series won’t turn her into some kind of unnecessary savior. As We See It should be prioritizing the stories of its neurodiverse cast, rather than once again depicting what it’s like to be a caretaker, and for the most part, it succeeds in doing this. As We See It is, above anything else, remarkably sincere, a heartfelt depiction of three very different people on journeys together and apart. Jason Katims has always succeeded in delivering moving coming-of-age stories of sorts, and he knocks it out of the park again with As We See It. It’s only made more tremendous by the unique and oft underrepresented people it centers its story around.