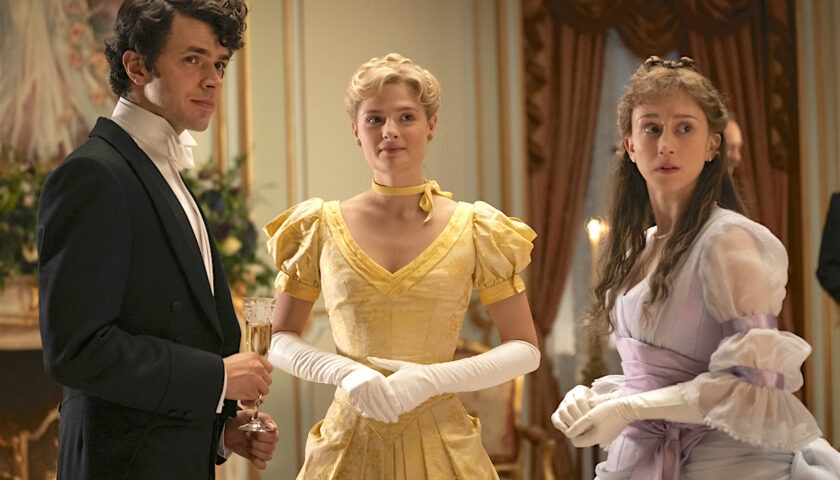 Since the beginning (also known as the late ’90s), HBO dramas have come with a certain expectation. Quality? Well, the odds are better here than elsewhere. Originality? Usually, yes, at least until the sequels and reboots start. But really, the one thing that has long tied together the awards magnet’s hourlong programs is, well, depravity. There’s a proclivity for violence, or coarse language, or sex and nudity — sometimes one of each, all of which are banned from broadcast. Give or take an idealist crowdpleaser here and an adventure series there, HBO dramas have always had a mature edge to them.

Now, maybe it wasn’t an edge as routinely gutting as Showtime or Cinemax, but for its first few decades of original programming, HBO needed that edge to stand out. Network TV was still pulling massive audiences. Subscription services were a niche market. Satellite and cable package add-ons had to offer something the other channels couldn’t. But what was once a quality rare enough to set them apart from the competition has now been replicated across the small screen.

I say all this not to lament “The Gilded Age’s” lack of “Knick”-esque needlepoint or “Perry Mason’s” corpse complex, but to prepare you, dear readers, for an altogether different kind of HBO costume drama. (OK, “The Knick” was on Cinemax, but Steven Soderbergh is an HBO man, through and through.) Julian Fellowes’ latest period story — originally intended for ITV overseas and ordered to series at NBC before moving to its final network home — is gentle, blissful entertainment. Watching the first five episodes elicited a reaction not unlike enjoying a warm fireplace with witty friends. The tasteful tale of class conflict at the start of America’s Gilded Age relishes its expansive production, stunning wardrobes, and talented ensemble as thoroughly as it preserves its respectful atmosphere. After all, Fellowes’ characters’ common goal is to be society’s most dignified member. Appearing gentlemanly instead of being a gentleman is social suicide, and where one stands on the public ladder of success is everything, whether they need to maintain appearances in order to access long-denied opportunities or for the simple satisfaction of knowing you’re a rung up on the guy down the block.

Our gateway into late-19th century New York’s aristocracy is Marian Brook (played by Louisa Jacobson, daughter to Meryl Streep), a young woman from Pennsylvania who’s left with nothing after the death of her father. Forced to move out of the rented home she thought her family owned, Marian’s only practical option is to join her two wealthy aunts in New York. Along the way, she meets an aspiring writer named Peggy Scott (Denée Benton), and the two form a fast friendship soon complicated by the consistent obstacle of the time: class.

Upon arriving in Manhattan, circumstance brings them both to the refined foray of Marian’s aunts, Agnes van Rhijn (Christine Baranski) and Ada Brook (Cynthia Nixon). Despite her initial resistance to housing her wayward niece and instinctual distrust of her new friend — “An unknown colored woman lent you money to travel to New York? I find that very unlikely.” — Agnes relents to both, arranging for Marian to meet her upper-upper class acquaintances and hiring Peggy as a personal secretary. Soon enough, the house is filled with passive aggressive differences of opinion, built from generational divides and cultural blind spots alike, but they’re all smoothed over well enough. After all, the Brooks are family, and while Ada and Marian genuinely like Peggy, even Agnes shows the respect earned by a skillful employee.

Where Agnes draws the line — repeatedly, and with enough droll quips perfectly elevated by Baranski’s impeccable execution — is with her new neighbors. The Russells are what the elder Brooks refer to as New Money. George (Morgan Spector) made his massive fortune as a railroad tycoon, and his wife, Bertha (Carrie Coon), spent a chunk of it on their palatial mansion just across the street from Agnes and Ada’s prying eyes. Despite their curiosity, neither aunt will dare venture the dozen paces required to look inside the magnificent estate; they simply will not lower themselves to these up-and-comers, nor grant a leg up to the Brooks’ lofty status.

Yet access is all Bertha wants and the only thing George still needs. She understands how fleeting a fortune can be, compared to joining the elite social club that protects its own for generations. (Her fixation on finding a “suitable” husband for her aging daughter, played by Taissa Farmiga, shows just how savvy she is at playing the long game.) He knows he’s conquered the business world, and the only way to keep growing is by befriending (or besting) the politicians and policy-makers who shape cities, states, and countries. Coon is tasked with setting the series’ stakes via a fiery moment to close the premiere, shouting to her husband that not only will she never stop fighting to elevate the family’s stature, but she’ll also seek vengeance on those that block their climb. It’s the kind of moment that in other hands would be an unforgettable pivot to villainy. Here, it’s just an unfiltered human reaction in a series where everyone always has their guard up.

Asking a talented acting troupe to embody people whose deepest desires are only shared through a coy smile or pointed scowl is like tossing catnip to a group of feral felines, but the cast of “The Gilded Age” still provides an embarrassment of riches. Coon, as remarkable as she is versatile, remains a far cry from her plainspoken sheriff in “Fargo.” Elegant and ferocious in equal measure, she builds Bertha quickly as a brilliant strategist whose singular focus doesn’t distract from seeing others clearly. (She also has the most breathtaking gowns, courtesy of costume designer Kasia Walicka Maimone, befitting Bertha’s need to prove her worth.) Jacobson and Benton embody youthful naïveté without sacrificing smarts and empathy; they’re both ideal audience proxies, steering “The Gilded Age” forward as the next generation pushing for change through positivity. Nixon is strongest when she’s serving as the supportive aunt (her more frenzied moments skew too close to the manic version of Miranda, who’s still haunting “And Just Like That…”), but it’s Baranski who steals the show. There’s a 20-minute run in the second episode where the only notes I took were quotes from Agnes. Despite her clout, the character is hardly an overpowering presence in the series. It’s Baranski who makes her so bold.

The combination of rather serene storytelling centered on extremely wealthy individuals may prove trying for audiences fed up with rich people’s problems. (A handful of the house staffers are given their own arcs, but none so far compare to the folks upstairs.) Similarly, “Downton Abbey” detractors may see too many similarities to invest in the next chapter of Julian Fellowes’ “Gosford Park” successors. But if you’re normally enamored with period dramas, Masterpiece on PBS, or well-orchestrated ensemble pieces, “The Gilded Age” should provide plenty of entertainment in the weeks to come. Just try to remember it’s on HBO.