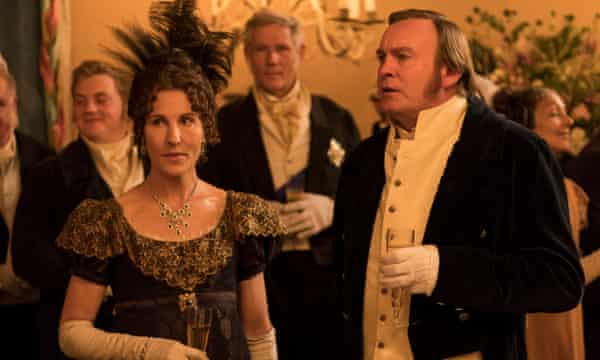 The spikiest words in Belgravia, Julian Fellowes’ new six-part, Sunday night snobathon, are “Mr” and “Mrs”. Both are uttered frequently, and never without sneering emphasis on the sibilants, as if there were nothing worse you could be. Fellowes’ work has a consistent through-line, which is that nobility may be found at the top and bottom of society, but never in the middle. There’s nothing as vulgar as aspiration.

The main would-bes here are the Trenchards, a merchant middle-class family on the make in early Victorian society. Philip Glenister is James Trenchard, an army victualler known as “The Magician”. In 1815, he and his wife Anne (Tamsin Greig) are in Brussels, where James is supplying Wellington’s army. They cadge an invitation to the Duchess of Richmond’s (Diana Kent) grand ball, through the machinations of their daughter Sophia (Emily Reid), who is having an affair with the Duchess’s nephew, Lord Bellasis (Jeremy Neumark Jones). Halfway through the party, Wellington gets word that Bonaparte has advanced, and orders his men away from the festivities to prepare for battle. Trenchard survives Waterloo, but Bellasis is killed.

Twenty-four years later, the Trenchards’ elevation is nearly complete. James is now working with the architect Thomas Cubitt to develop a new area of London – Belgravia – for the wealthy to live in. The Trenchards live there, too, in a grand townhouse complete with a suite of bitchy servants led by Turton (Paul Ritter, sceptical and acerbic and watchable). Sophia died soon after Waterloo, but they have another son, Oliver (Richard Goulding), married to a grasping socialite, Susan (Alice Eve.) At a new-fangled “tea” party, Anne bumps into the Duchess of Richmond, who remembers her from all those years before. The Duchess’s sister Lady Brockenhurst (Harriet Walter) – Bellasis’s mother – introduces herself, and soon we learn Sophia had a secret.

As with everything Fellowes does, Belgravia toils in the long dark shadow of Downton Abbey. On the evidence of the first episode, it lacks Downton’s sense of place. From the first time we saw Highclere Castle, the geography of that programme was set firmly in the mind. Belgravia is a trickier sell. Fellowes has also never met a bit of clunky historical exposition he didn’t like. A discussion about Thomas Cubitt sounds like a dramatised Wikipedia entry.

Yet he has an indisputable gift for instant characterisation. The moment someone walks into shot, we know who they are, what they want and how they fit into the precise social stratification of Fellowes’ universe. It’s not subtle, and it’s certainly a suboptimal use of talents such as Walter, Glenister and Greig, but it is effective. Those in Britain who like to watch icy women in lavish frocks throwing side-eye over the saucers – which is roughly nine million people – will drink it up. Belgravia doesn’t have ideas above its station, and in Fellowes-land, that’s a recipe for success.