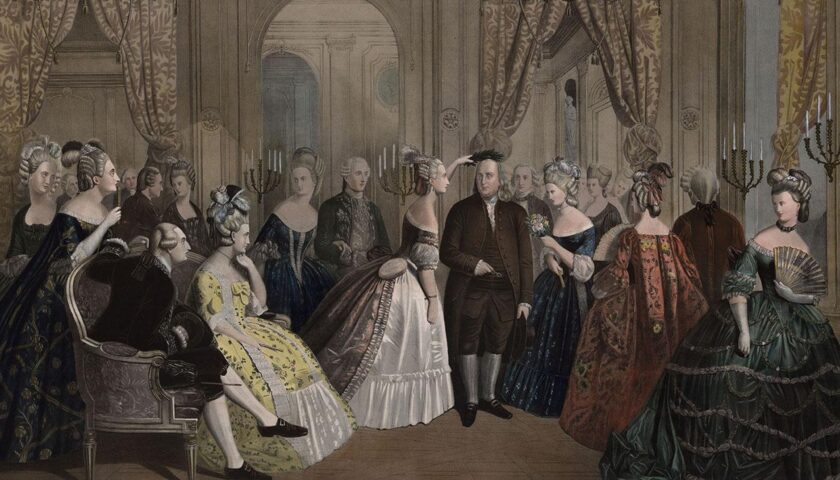 The docuseries follows the usual Burns formula: Interviews with historians, archival documents and illustrations, and voice overs reading passages written by Franklin and others (Patinkin is supported by the voices of Liam Neeson, Carolyn McCormick, Josh Lucas, and more). Narrator Peter Coyote takes us through Franklin’s life, from his childhood in Boston to his youth in Philadelphia, all the way up to the cusp of the Revolutionary War by the end of the first episode.

Franklin’s life philosophy was always about what made the lives of people better and the welfare of the colonies rather than any self-aggrandizement. Even though he dropped out of school to go live in Philadelphia, he was credited with a number of inventions as well as his famous kite experiment, where he proved that the skies are charged with electricity. But he never took patents on any of his inventions, hoping that they’ll be adopted by the masses.

His loyalty to the Crown is also examined. He spent five years in London, trying to get the Penn family to give up their effort to tax the people of Pennsylvania, and agree to make it a Crown colony. During that time, he left his wife and daughter back in Philadelphia and recreated a domestic life in England. There’s the matter of his “illegitimate” son William, who grew up to become the Crown-appointed governor of New Jersey, and the fact that he was a womanizer on both sides of the Atlantic.

But he was also a printer and newspaper publisher, and created Poor Richard’s Almanac, which would have the witty phrases that are now part of our lexicon. He was also the assistant postmaster of the colonies, and streamlined the postal system so that letters and parcels didn’t go over the ocean if it was between colonies. He was also the owner of enslaved people, and someone who initially fought slavery only as a way to have less non-whites (including “swarthy” Swedes, apparently) invade the colonies.

As discontent over England’s rule grew, though, Franklin’s views evolved, to the point where he considered himself less of a Brit and more of an American, in his then-advanced 60s.

One thing to know about Burns is that he’s pretty meticulous when it comes to his biographies. He moves from one event in a person’s life to another, not trying to get fancy with the timelines in order to find a story. His method works because the people he profiles lead fascinating lives from beginning to end. Obviously, Benjamin Franklin is one of those people who led a fascinating life. But what’s great about the docuseries Benjamin Franklin is that it’s not shy about portraying the Founding Father’s flaws as well as his greatness.

Burns, via the interviews with historians as well as the readings voiced by Patinkin, certainly conveys how humble Franklin was, including the fact that he never painted himself as a role model or some sort of mythical figure. In his writings, for example, he acknowledges his biases against Black people, a view which changed over the years but never went away completely. His affairs, the way he mostly ignored Sally, the daughter he had with common law wife Deborah Read, his long forays to London that fed his intellect but made him neglect his family — all of that information isn’t new, and it’s not presented as new.

But presenting the entire picture of Franklin, not just the older gentleman whose picture is on the $100 bill, shows that even the most flawed individuals can rise to the occasion, which Franklin did many times in many different fields. Moving from his time as a printer and publisher, to his scientific experiments, to his inventions, to his travels, reinforces just how remarkable the man and the life he led was.