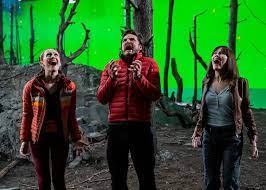 The COVID-19 pandemic was hard on everyone, not least Judd Apatow. Among the many casualties was his last movie, “The King of Staten Island,” which was supposed to open the SXSW film festival but had to cancel after America went into lockdown. When faced with such challenges, creative people create. Some made bread. Others grew out their beards. Judd Apatow made a movie. A very bad movie. In not-even-the-worst-thing-to-launch-on-Netflix-lately “The Bubble,” a team of insufferable Hollywood actors quarantine together on the set of a massively disorganized franchise movie and proceed to drive each other crazy. But hey, what did you do during COVID?

During her Oscar opening monologue, co-host Amy Schumer (star of Apatow’s far-better 2015 “Trainwreck”) took a moment to congratulate the audience. “During a raging pandemic, you made a movie. Give yourselves a hand,” she said. “And yet they weren’t all great. … You know who you are.” For every “Borat,” there seem to be a dozen like “The Bubble.” Apart from such heavy-hitting documentaries as “76 Days” and “The First Wave,” the movies made during the pandemic about the pandemic have nearly all been awful. Still too soon? That wasn’t the issue. COVID is now a part of everyday life, and it’s only normal that movies should acknowledge it.

protocols were. Even bubbles proved to be fallible — the idea made sense in theory but was only as safe as its weakest link — with many getting COVID all at once when someone broke the pact for a selfish reason (like shagging a Spanish soccer player “quaranteaming” in the same hotel).

Apatow rounded up a bunch of very funny people — wife Leslie Mann, daughter Iris Apatow, Emmy winner Keegan-Michael Key, Oscar nominee Maria Bakalova, David Duchovny, Fred Armisen and more — and cast them as the crew that comes together to make a generic flying-dinosaur sequel, “Cliff Beasts 6.” Like a cross between the latest “Jurassic World” and “Resident Evil” movies (both of which were made under COVID-safe conditions), this gratuitous sequel to a mostly greenscreen franchise serves as Apatow’s chance to skewer the kind of brainless, VFX-driven studio movies that have made adult comedies something of an endangered species. This is his “Tropic Thunder,” with more inside jokes and a lot less for mainstream audiences to recognize or relate to.

After skipping the previous “Cliff Beasts” movie to make a critically derided issue movie, “Jerusalem Rising 2,” actor Carol Cobb (Karen Gillan) reluctantly agrees to leave her boyfriend for three months and fly to England, where the ensemble — a squabbling and somewhat incestuous surrogate family who’ve been together since over five installments — has agreed to self-isolate for two weeks before what’s intended to be a three-month shoot. Kate McKinnon shows up as a studio exec who checks in from time to time via video chat from far-flung vacation spots. Otherwise, it’s up to producer Gavin (Peter Serafinowicz) and a pair of COVID compliance officers to babysit this unruly bunch, played by Samson Kayo and Harry Trevaldwyn (there’s at least one breakout in every Apatow movie, and this Instagram impressionist all but steals “The Bubble”).

Among the “Cliff Beasts” stars, some have past history. Lauren (Mann) and Dustin (Duchovny) just filed for divorce, but the chemistry is still boiling between them, while vaguely Will Smith-like Sean (Key) just published a bestseller that may or may not be the basis of a cult — an amusing idea that doesn’t really go anywhere. Others are new to the mix, meant to reflect recent Hollywood casting trends. There’s Oscar winner Dieter (Pedro Pascal), who spends much of his time either high or hitting on the help, and Krystal Kris (Iris Apatow), a super-popular TikTok star whose dance segments are more amusing than the rest of the movie combined.

Apatow wants “The Bubble” to be sort of a greenscreen “Tropic Thunder,” sampling big chunks of “Sharknado”-level schlock already cut together and rendered, then cutting to the actors running on treadmills or dangling from wires for a laugh, as if this is the way such movies are made. Truth be told, there’s scarcely a more boring place on earth to be than a movie set, where people spend most of their time waiting and scenes are repeated over and over. But no one wants to see that, which explains why Apatow has opted to make what’s described as “the 23rd-biggest action movie franchise” look like some kind of amateur goof, directed by a barely competent Sundance winner way out of his league (Armisen, about a quarter-century too old to be the next Jon Watts or Colin Trevorrow).

Dustin butts in and attempts to rewrite the script, while the rest of the cast try to amuse themselves during their downtime. Then a PA tests positive for COVID, and Apatow cues yet another montage of high-maintenance actors going stir crazy. Every once in a while, something amusing happens, but it all feels like one endless “Saturday Night Live” sketch. Apatow has said he built the movie fully expecting audiences to pause and take breaks throughout, but he doesn’t give them reason to keep going. There are a couple outrageous bits, one involving a sniper hired to keep the actors from leaving and another that allowed the team at Industrial Light & Magic to render the R-rated dino-bits typically neutered from other projects, but it mostly feels like Apatow believes anything goes when addressing the “painful shortage of new film and television content” the world faced during the pandemic.

When this chaotic venture melts down in production, Scott (Nick Kocher), the “EPK guy” tasked with shooting behind-the-scenes footage, winds up releasing an unmaking-of documentary instead. This seems like it would’ve been the right way to frame “The Bubble” — not as a semi-improvised scripted comedy but as more of a Christopher Guest-style mockumentary that intercuts between the outrageously unprofessional behavior that occurs on location and talking-head footage of the actors trying to do damage control after the fact. That format feels slightly out of date these days, but then, so do most of the jokes in “The Bubble.”