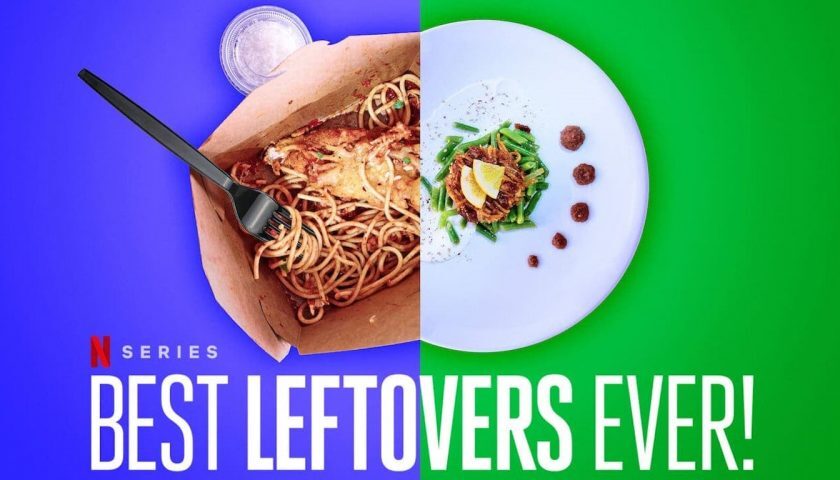 Host Jackie Tohn (GLOW), on a colorful set with giant milk cartons and Chinese food takeout containers, says, “This is that leftovers show, you know, the one that taught you that composting is like leftovers for Mother Earth?”

The Gist: Best Leftovers Ever! is a cooking show where three home chefs, who are experienced at making great meals out of leftovers, are challenged to work with whatever leftovers they’re given to create high-end, well-presented dishes. Joining Tohn at the judge’s table is restaruanteur/comedian/influencer David So and chef/writer Rosemary Shrager.

The home chefs are given two challenges, and the results of both determine who wins the $10,000 prize for doing the most with their leftovers. The theme of the first episode is “comfort food”; in the first challenge, the chefs are given a bunch of mostly healthy leftovers, like veggie salad with feta, some pork tenderloin with beets, cauliflower rice and “some sort of avocado with cottage cheese,” Tohn says. The challenge is to make a comfort food dish from those ingredients and whatever spices and additional helper ingredients are in the pantry, all in 30 minutes. The idea is to use as many of the leftover dishes as possible — though two out of the three chefs wisely decide to skip the cauliflower rice.

In the second challenge, we look in “Jackie’s fridge,” which seems to have a lot of shrimp in it. There are three bags, all with leftover fast food staples — chicken fingers, a burger and fries, and a fish sandwich, all with fries — and “make something fancy,” as Tohn says. The chefs have an hour to do it. They then step into the Chinese food takeout container (which we all know is designed to fold out and act as a plate… right?) while the judges confer.

Chopped-style cooking shows like Best Leftovers Ever! need just a few elements to make them work. They need chefs with personality who seem to have the ability to make something great out of weird or not-so-great ingredients. And the shows need hosts that have tons of personality but try to keep out of the way of the cooking action that’s going on. In that regard, Best Leftovers Ever! is batting about .750.

The problem doesn’t lie in the chefs, who are having fun, have loads of personality, don’t take themselves seriously, and have some really creative ideas about how to use leftovers that already have much of their flavor already determined, via a coating or sauce or dressing. The challenges seem challenging enough, and having two of them in a show that clocks in at just over 30 minutes feels like the right pace. A third challenge might not have shown enough detail about how the contestants are faring, so even if two might feel a tad ponderous, it works better in the end.

No, the issue we’re having here is at the judges’ table. We absolutely love Tohn, in both GLOW and in appearances on game shows like 25 Words Or Less, but here she looks like she’s trying way too hard to fill the show with kitschiness. She even sings an ode to leftovers at the end of each episode. Don’t get us wrong; Tohn does a lot with the dead time. But there just felt like there were times where she had to dial back the zaniness and just be witty or jokey. Shrager tries a little too hard, too, but those instances are fewer. So seems to be the most even-keeled of the three, which helps tone down the over-enthusiasm of Tohn and Shrager.

We do like the aspect of showing some of the ways the judges kill time when they’re not observing what the chefs are doing; the three of them tried to toss cheese balls in each other’s mouths in one instance. That vibe is important to a show that’s about leftovers; we just hope Tohn and the judges settle into a little bit less of a performative vibe.