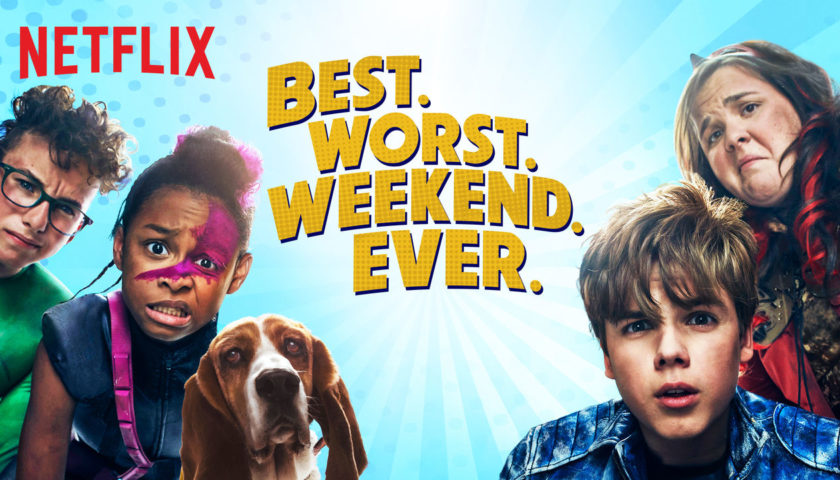 Review: Debuting on Netflix today, the new eight-part limited series Best Worst Weekend Ever is the latest in a long, successful line of teen-skewing content for the streaming platform. Coming courtesy of Robin Stein and Dan Franklin, with Jeremy Garelick serving as showrunner and executive producer, the coming-of-age comedy revolves around a group of dorky teenagers and the last weekend of their summer before becoming – gulp! – high-schoolers.

It’s nice to see a series like this that isn’t – like Everything Sucks!, which springs immediately to mind – heavily reliant on nostalgia, although admittedly in Best Worst Weekend Ever that novelty is supplanted by an enthusiastic appreciation for geek culture. (Comic-book-style captions frequently pop up to announce a change in setting, a jump in time, or the introduction of a new character, and the episodes are cloyingly referred to as “Issues”.) In fact the inciting event of that escalating titular weekend is the four protagonists trying – and failing – to sneak into Comic-Con to meet the author of their favourite comic book, who left the series on a cliffhanger and disappeared.

Those protagonists are Argo (Cole Sand), a mop-haired geek with an absurdly militant father; Zed (Sam Ashe Arnold), who fulfils the archetype of thinking he’s much cooler and older than he actually is; Treece (Brianna Reed), who occasionally spews out run-on sentences at absurd speed, which wasn’t funny the first time and doesn’t become so in any subsequent instances; and Hallie (Brittany Garms), the chubby outsider who just wants to be part of the gang.

None of these folks are insufferable of even unlikeable, and to its credit, the show is able to maintain a laidback, fun atmosphere throughout its entire – refreshingly short – first season. But unlike the aforementioned Everything Sucks!, which was a smarter, deeper, more thoughtful show than it first seemed, Best Worst Weekend Ever never shifts into that emotional gear. It’s content to pile on one slapstick event after another and play up the laughs, but the fact it’s quite clearly pitched at a younger-than-usual demographic means it doesn’t have the same kind of wide-ranging appeal or staying power as some of its contemporaries. But contrary to the title, it’s a weekend that’ll pass by without much fuss.