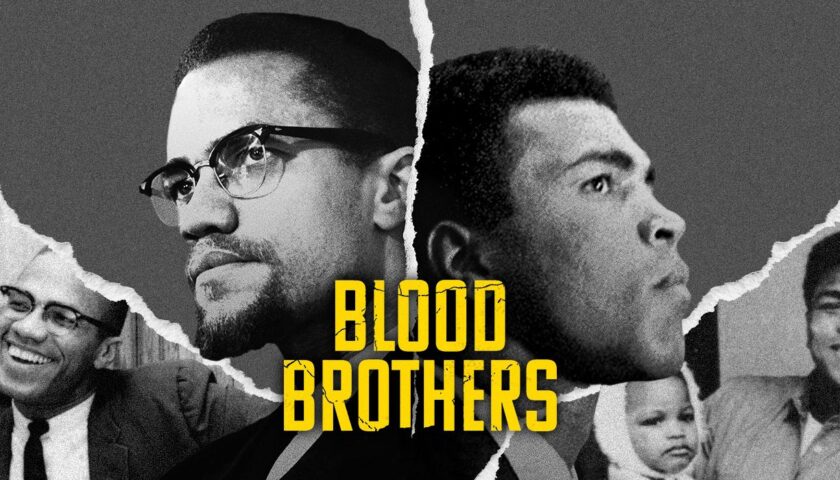 The interviewees in Blood Brothers: Malcolm X & Muhammad Ali generously use words like “destiny,” “fate” and “prophecy” to describe the friendship between the two iconic civil rights activists at the center of this documentary. At first the words, a testament to the influence and deep meaning of the pair’s connection, sound beautiful. But as the film unfolds, meandering through their respective biographies before, with great speed, chronicling their three-year friendship, the nouns start to ring hollow. You begin to crave different ones, deeper anecdotes, more critical probing here and there. You want to hear less about how you should feel and see more that makes you feel.

Directed by Marcus A. Clarke, whose documentary The Wizrd was a sensitive portrait of the Atlanta rap star Future, Blood Brothers struggles under the weight of its subjects. Malcolm X, an activist with fierce convictions, and Muhammad Ali, the heavyweight champion he would come to mentor, loom large in the public imagination. Their respective biographies have been told and retold at every point of the ongoing movement for Black liberation, and their friendship, which was partially recounted in Regina King’s spectacular film One Night in Miami, is nothing short of legendary. It’s understandable, then, that when confronted with an intimidating web of information, with such a storied legacy, Clarke opts to play it safe and construct a solid doc of after-school-special quality rather than a confident, clear-eyed narrative.

The documentary, which is based on the book of the same name by Randy Roberts and Johnny Smith, starts with an overview of its subjects’ formative years. Through interviews with surviving family members — Malcolm X’s daughter Ilyasah Shabazz, Ali’s brother Rahman and daughters Maryum and Hana — Clarke contextualizes their intellectual roots and provides required biographical details about the two men, particularly what led them both to Elijah Muhammad’s teachings.

Malcolm X was born in 1925 in Omaha, Nebraska, and Blood Brothers, to its credit, refreshingly frames his early years around the impact his parents, Earl and Louise Helen Little, had on his understanding of the world. The elder Littles were outspoken community leaders and subscribed to Garveyism, the school of thought influenced by the Pan-African activist Marcus Garvey. Garvey urged Black Americans to see themselves as part of a global struggle and encouraged them to lean on their communities rather than on unreliable governments, establishing local economies and infrastructure, for example. The trajectory of Malcolm X’s life after the horrific death of his father is well known at this point: He eventually dropped out of school, moved to Harlem to sell drugs, spent some time in prison, and then became interested in the teachings of Elijah Muhammad and the Nation of Islam.

Ali’s youth differed from Malcolm X’s in considerable ways. Ali, whose birth name is Cassius Clay, was born in 1942 in Louisville, Kentucky, a year after Emmett Till was born in Chicago. The future boxing champion grew up hearing stories about lynching, which, in the words of his daughter Maryum, made him “very sensitive to oppression.” The doc focuses on his trip to Rome in 1960 for the Olympics. In Europe, the 18-year-old athlete was treated with a respect he rarely experienced in the American South of his youth. That experience, followed by a rude awakening when he returned to the States, radicalized him. The documentary is less clear about his path toward Islam. At first this conversion seems to be a result of meeting Malcolm X, but later Clarke suggests that Ali’s religious education started before that.

Blood Brothers smartly explores the personal impact the public figures had on individual lives. “Malcolm made you believe you couldn’t die,” says Melchisedek Supreme Shabazz-Allah, the Universal High Priest of the Nation of Islam. “And when you’re a young man and you get a teaching like that, that’s what you need.” Ali had similar charisma and charm. Details of his 1960 trip to Rome reveal a self-possessed, self-assured Black man, and how that confidence threatened white Americans. It’s no wonder the pair had an instant connection.

Not much is known about Malcolm X and Ali’s brief friendship. The details of such key moments as their first encounter and that transformative 1964 night at the Historic Hampton House in Miami (after Ali beat Sonny Liston and became the heavyweight boxing champion of the world) remain a mystery. Clarke relies on hard-to-get-into graphics to illustrate those moments. Commentary from scholars like Cornel West and Herb Boyd, however, adds considerable depth to theories and conjectures about the encounters.

The doc picks up momentum when it delves into the disintegration of Malcolm X and Ali’s friendship, a treasure trove that could inspire an entirely separate essay. The pain of their separation is apparent, and although they never reconciled, the weight of regret, especially on Ali’s side, is evident. The film’s interviewees offer their own theories of why things fell apart, some easier to stomach than others. Here, Clarke also teases but doesn’t linger on how heavily surveilled the two men were. How eerie that much of what we do know about their relationship comes from federal agents.

But just as soon as it picks up and becomes interesting, Blood Brothers falls apart again, leaning into familiar platitudes. “A generation or two from now,” Boyd asks near the film’s final moments, “what perceptions are they going to have, what estimations of Muhammad Ali, of Malcolm X?” In response, the doc’s other scholars observe how the images of both men have been heavily edited and reframed to make them nonthreatening to white audiences. Who would have thought that Malcolm X’s face would end up on a U.S. postage stamp and that Ali, later in his life, would become a tool for the nation’s diplomacy goals? Boyd’s accurate observation stayed with me as the film closed and I realized that Blood Brothers probably wouldn’t be the film to interrogate or even transform that public image.