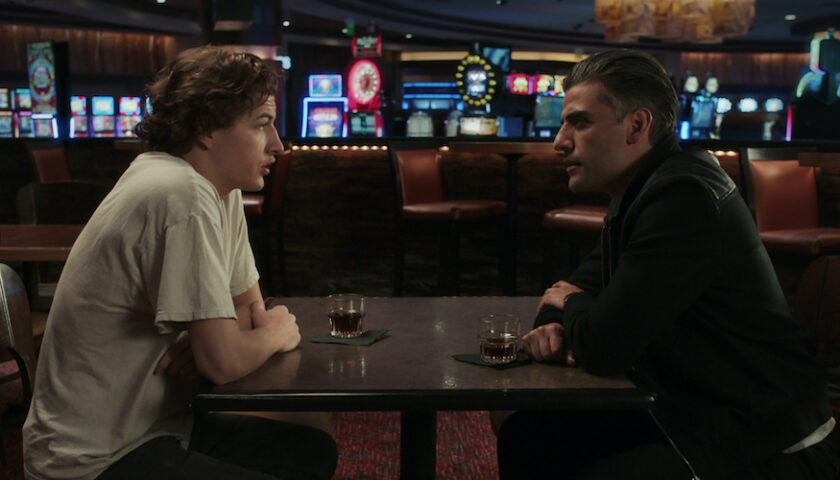 I’m a sucker for card-sharp movies, and I’m not alone. The allure of films like “The Cincinnati Kid” or “California Split” or “Rounders” is that the poker games have the quality of athletic showdowns: the kind of hand-to-hand, eyeball-to-eyeball aggression we associate with a contest taking place in a gladiatorial arena. But in a card movie, it’s all done sitting in chairs, with mental acuity (and fate!) as the only weapon. Great poker scenes, in their slyly civilized cards-close-to-the-vest way, formalize the desire to destroy your opponent, but they’re also layered with a drive to psych him out that most combat scenes don’t have. To me, the single greatest movie card sequence is the Texas hold ’em tournament at the center of “Casino Royale.” It’s a little movie unto itself, and the currents of strategy and malevolence and sheer nimble play that pass between Daniel Craig and Mads Mikkelsen make the sequence an epic of existential suspense.

In “The Card Counter,” the writer-director Paul Schrader moves into this genre with consummate ease and skill. A great poker sequence makes you feel like you’re seated at the table, at the heady center of the action, and “The Card Counter” gives you that sensation. The central character, who goes by the poker-faced pseudonym of William Tell (there’s a good reason he’s hiding his real name), is played with slicked-back silver-black hair and svelte control by Oscar Isaac. He’s a lonely-man drifter who spends his life driving from one casino to the next, ordering his double whiskeys neat and slipping in and out of the card tables with barely conspicuous purpose. He’ll drop by a gambling palace in A.C. (Atlantic City), but mostly he takes advantage of the gaming-ization of Middle America, moving through the desultory, high-ceilinged spaces of anonymous suburban fun parlors with names like the Golden Nugget.

Tell essentially makes his living as a blackjack player, and at the beginning he explains to the audience how card-counting works: how the house has the advantage in blackjack, but that if you’re able to categorize the cards by value and count every one of them, you can flip the advantage to yourself. No one ever points out that the rules against card-counting in blackjack aren’t just unconstitutional — they’re patently absurd. Because, of course, card-counting is at the heart of how you win at all card games. (That’s certainly true of poker.) Card-counting isn’t cheating — it’s basic strategy.

That said, Tell, who’s a master card counter, not only has a foolproof system for winning. He has figured out how to fly under the radar. As he tells one character, the house doesn’t really care if you count cards and win. It just doesn’t want you winning too much. So Tell wins just enough to stay out of sight, walking away with a modest profit. He doesn’t stay at the casino hotels; he rents bargain-basement motel rooms nearby, so the casino can’t track his movements or anything else about him. It’s a life that sustains him; it’s one he likes. (He’s like George Clooney in “Up in the Air” as a moody noir antihero.) But it’s also an existence he uses like a drug, to numb himself to what’s really going on.

“The Card Counter” starts off as a pretty good poker movie — but, of course, it’s not really a poker movie. It’s a Paul Schrader movie, which means that it’s got much more on its mind than watching a straight flush beat a full house. At first, the film seems very different from his last major feature, “First Reformed,” though it’s actually a companion piece to it. “First Reformed” won Schrader some of the best reviews of his career (along with his first Oscar nomination), so it’s no surprise to see that, consciously or not, he has used it as a kind of template for what he does here. Where “First Reformed” was a gripping (and knowing) pastiche, casting Ethan Hawke as a contempo cross between the heroes of “Winter Light” and “Diary of a Country Priest,” the movie had a topical firecracker at its center. It was a spiritual investigation into environmental catastrophe — not the usual Hollywood lecture on climate change but a drama that asked, “What is our collective downplaying of this issue doing to us?” Schrader seduced a new generation of cinephiles by detonating that issue, turning it into moral dynamite (quite literally in the final scene).

In “The Card Counter,” too, Schrader sets up a heady thriller framework and embeds it with a topical issue that’s like an open wound, a scar on our national psyche. In this case, the issue is that of state-sanctioned torture in the period after 9/11. Tell, as it turns out, is a former military man who participated in the enhanced-interrogation-technique torture of prisoners at Abu Ghraib. He was photographed in “joke” shots he took with the prisoners (like the grinning, thumbs-up images of Lynndie England), and when the photos came to light, he was made a fall guy for America’s torture policy, treated as a “bad apple” who needed to be punished. He was sent to the penitentiary at Leavenworth for eight-and-a-half years, which is where he learned to play cards.

Schrader flashes back to scenes of torture at Abu Ghraib, and they’re some of the most scaldingly powerful to be put on film. The director shoots them with an extreme wide-angle lens (almost a fisheye), sending his camera rolling through the prison corridors, and though we’ve seen a number of serious — and very effective — movie dramas that have confronted the reality of American torture policy (like “The Report” and last year’s “The Mauritanian”), Schrader evokes the horror of it in a frightening new way, dunking our senses in the heat and the scum, the bodily fluids, the death-metal relentlessness that turned a place like Abu Ghraib into a fetid version of hell. He depicts America’s post-9/11 torture policy the way that “Son of Saul” depicted the Holocaust: as the grotesque moral and physical horror it was. In his scuzzy motel rooms, Tell wraps every piece of furniture — the lamps, the desks, the bed ­— in white cloths. Is this a form of OCD? In a way. But it’s ethical OCD. He’s trying to cleanse the memory of the slime inferno.

At this point you may ask: “The Card Counter” is a poker movie…and a torture movie? How do those two things fit together? Schrader draws them together by staging a right-wing hotel-expo encounter between Tell and his former overseer at Abu Ghraib, Major John Gordo, played by Willem Dafoe as a skeevy opportunist with a mustache like a giant sardine. At the same expo, Tell meets Kirk-with-a-C (Tye Sheridan), the twentysomething son of another torturer, and winds up taking him under his wing. The two drive around together on the casino racket, in a way that may remind you, at times, of Paul Newman and Tom Cruise in “The Color of Money.” Except that in this case I didn’t totally buy Tell’s motivation. He wants to help the kid; he wants to pay off his loans; he wants him to be a better version of himself. It’s hardly unheard of for a movie character to behave in a benevolent way, but what Tell is up to can be explained only in abstract “Bressonian” terms. He’s trying to Expiate His Guilt (which is really America’s guilt). He’s living on autopilot until he confronts what he’s been repressing.

Tiffany Haddish plays La Linda, the poker matchmaker who represents wealthy investors who will back Tell in high-stakes games, and Haddish, with a playfully cynical warm sparkle, brings a note of ironic hope to the movie it can use. She and Isaac have a sexy, noodgy chemistry; La Linda gives Tell something to live for. But I wish that Dafoe’s Gordo were a grander antagonist, and that he was dealt with in a more explosively charged, less symbolic way. Gordo, of course, is just a stooge who represents something larger: the corrupt superstructure that allowed America, in the wake of 9/11, to trash its own values. Tell, likewise, represents our collective desire for absolution. But part of the beauty of poker is that it doesn’t represent anything. It’s just a game. “The Card Counter” is a good game that forgets it’s a game by working so hard to be a statement.