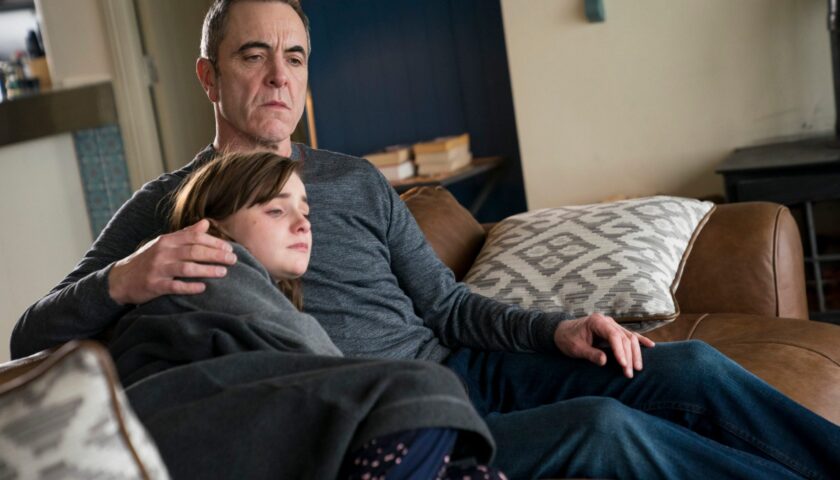 The history of a country like Northern Ireland can make even a standard cop drama rife with layers of intrigue. It’s not just about finding a killer, it’s about whether the search for the killer will ruffle feathers to the point where it may flare up tensions that have been tamped down but are still simmering over the past two decades. That’s the idea behind the new Acorn TV drama Bloodlands.

A man drives through Belfast on its busy highways, listening to the radio.

DCI Tom Brannick (James Nesbitt) is driving to a bar to meet his daughter Izzy (Lola Petticrew) and her new boyfriend; she’s about to start medical school, and he wanted to give her a present. It’s a pendant that both he and Izzy’s mother had; he’s held onto it since she went missing in 1998, but has decided to give it to Izzy as she starts on her new adventure.

The case he’s called to the next day involves a car pulled out of the water and its missing driver. A postcard pulled from behind one of the side view mirrors gives Brannick the idea that this may have something to do with a case from back in that late ’90s time period, especially when he finds out the car belongs to a former IRA operative named Pat Keenan (Peter Ballance).

He meets with an old colleague, DCS Jackie Twomey (Lorcan Cranitch), and they talk about an old, secret case code named “Goliath”. Brannick wonders if Keenan’s disappearance is connected at all to that case. Twomey tells him to tread lightly; the peace between the Catholics and Protestants over the last two decades has been delicate, and the last thing anyone needs is Brannick poking around.

But, as he investigates Keenan’s disappearance with his partner, DS Niamh McGovern (Charlene McKenna), he increasingly things there’s a connection to Goliath. After questioning Keenan’s wife, and he’s found to be poking around Keenan’s offices, the distrust between the former IRAers and the cops resurfaces, and a patrol car is firebombed as revenge.

As McGovern presses Brannick about the connection, she manages to get him to reveal to her that the Golliath case involved the targeted murders of four people leading up to the 1998 peace accords. One of those people was his wife, Emma, an intelligence officer investigating domestic terrorism. The bodies were never found. When he revisits the brother of one of the other victims, he finds out that an eyewitness account of someone digging holes on a tiny island in a local lake was never passed to higher-ups. As he pushes, Twomey takes over the precinct in an attempt to sit on his old friend’s efforts.

Bloodlands is a pretty traditional UK-based cop show with a troubled protagonist, along the lines of Prime Suspect and others, though with callbacks to “the troubles” of Northern Ireland layered in, the story becomes a bit different.

Bloodlands, created by Chris Brandon, is one of those shows that doesn’t blow you away by its story or any twists and turns; it’s a pretty standard police thriller that just happens to delve into a fictional case with deep roots in the recent history of Northern Ireland. But standard isn’t bad in this case; the first episode was solidly constructed and buoyed by a fine performance by Nesbitt.

Brannick has been grieving his wife for over 20 years, and his stoicism starts to crack as he realizes that he may get some unwelcome closure on Emma’s death. When he finds out about the spiked eyewitness report, he sends a search team to dig, against Twomey’s wishes. But he’s not sure he wants to know what they find. When he finds out that Twomey was the one who spiked the report in the interest of maintaining the peace, his distraught reaction speaks as much to the notion that he could have known his wife’s fate 20 years ago as to the fact where his supposed friend kept that evidence from him.

So the next three episodes of this four-episode series will have Brannick and McGovern chasing down just who Goliath is. We suspect that Twomey is somehow involved, but let’s hope that he’s not Goliath himself. Given the straightforward storytelling and solid performances, it’s certainly possible that there won’t be many twists. But let’s hope there are some detours along the way.