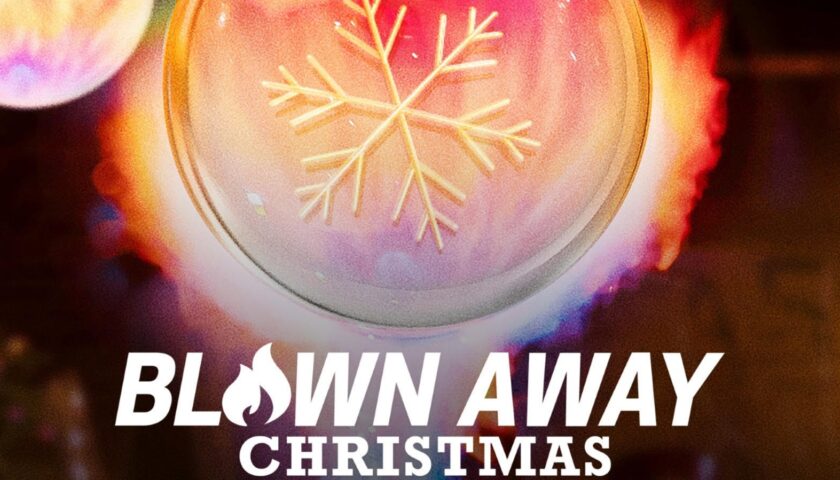 My favorite moment in every episode of Blown Away comes about two-thirds of the way through each episode: As soft music plays, we see the empty hot shop, the gallery at the far end, its contents obscured.

The gallery lights come on, and the glass walls at its front become transparent and then slide away, revealing incredible glass art that the contestants have somehow created in just hours with rods of solid glass, an assistant, and 2,100-degree furnaces.

It’s an especially lovely image on Blown Away: Christmas, as the camera pans across a workshop full of holiday decor, and the doors open to show holiday- and winter-themed glass art.

Before all this happens, on-screen text says “present,” and while it technically means “presentation,” there’s a perfectly apt double meaning on Blown Away: Christmas (Netflix, Friday), which is a nice four-episode gift arriving the week before Thanksgiving.

The challenges are all holiday-themed, from creating gifts to creating a full tree’s worth of ornaments in just hours.

The set of Blown Away is perfect for a holiday season: an icy, snowy warehouse, smoke coming from the chimney, transitioning into a warm interior with snow drifting past the windows. (The hot shop is constructed in a warehouse in Hamilton, Ontario, known as The Cotton Factory.)

The show’s crew has done a spectacular job transforming the interior: Christmas trees and faux birch trees wrapped in twinkling lights border the space; flat, glass stockings are hung by a fireplace; and other decorations abound, complementing the brick walls and wood beams overhead. I’d like to live there, and not even because of the glory holes.

All of this is out of the way of the artists, so it’s just backdrop, but it adds even more metaphoric warmth to the interior.

Blown Away: Christmas has swapped out seasons one and two host Nick Uhas, formerly of Big Brother, for Bobby Berk, the long-suffering member of the new Queer Eye team, who tends to toil away off-camera creating spectacular space makeovers while his fellow cast members bond with the episode’s subject.

Bobby Berk previously guest-judged an episode of Blown Away, and was one of the better guest evaluators. In this special, he gives precise feedback, and at least acknowledging his own preferences, such as his reaction to one contestant’s color palette.

This season, Berk is just one of two judges for the whole competition, along with resident evaluator Katherine Gray. There are no guest judges, perhaps owing to the shortened production schedule and/or COVID-related restrictions.

Katherine’s knowledge and expertise is terrific, as always, and I appreciate that Bobby at least acknowledges his lack of knowledge about glass blowing: “How do you do square stuff?” he asks her. “That mallet thingy? And bang it, and flatten it, and stuff like that? All the technical terms, that’s why I’m here, Catherine.”

As a host—well, did I mention Bobby Berk is good at judging? The show’s sometimes clunky editing doesn’t pair well with his flat delivery, and together they spectacularly whiff the big reveal of the winner in episode four, which is about as anticlimactic as possible, so much so that the winner seems to have missed the announcement.

I appreciate Blown Away, even though I’m frustrated that the TV show is still far less-interested in the process of glass blowing than I am.

Just like in the first two seasons, the judges don’t actually explain their decisions, either to us or to the contestants; if Jesse Palmer can summarize what’s great or awful about a cake in a few words, Blown Away could do that, too.

In the first episode, the editing literally cuts away from Nao making candy canes—how is she doing that?!—to the balcony, where Katherine Gray asks Bobby Berk, “What present from your past is the most memorable?” I just don’t understand why that’s more interesting than watching or learning about the creative process.

But I still appreciate what gets created, and the artistry and skill involved, never mind the physical labor, and I’m grateful that Blown Away: Christmas has given us more time with these artists.