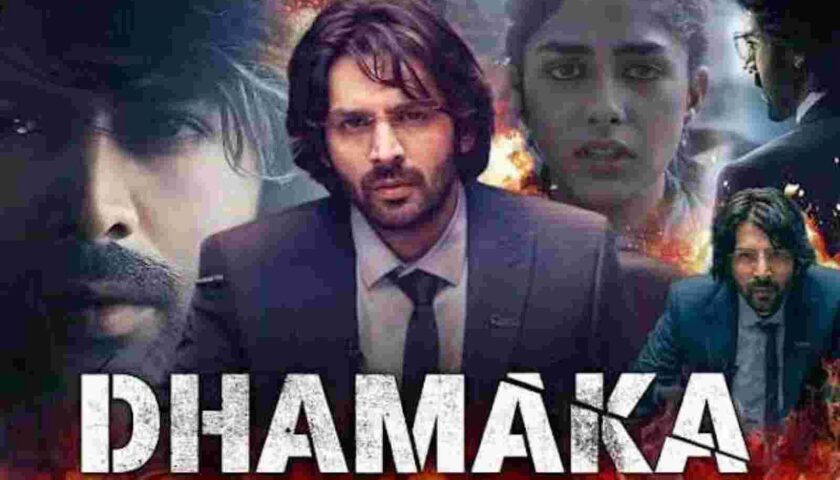 Finally, Netflix has come up with a Hindi content that touches the right strings in your heart and makes you think. ‘Dhamaka’ starring Kartik Aaryan and Mrunal Thakur, is honest in intention, near-perfect in execution, and succeeds in leaving a mark of its own.

An ex-TV anchor gets an alarming call from someone claiming to blast the Mumbai Sea-link unless some of his demands are met and the TV anchor turned Radio Jockey sees an opportunity in it to save the sinking ship of his career. How the plans of both of them unfold forms the core plot of this engaging thriller. This movie may be viewed as a hostage drama or even a psychological thriller. In both ways, it offers a highly engaging content with plenty of edge-of-the-seat moments. The way director Ram Madhvani handles a convoluted plot like this in the simplest possible way exonerates him from the sins he had committed while making a cheap show like Aarya. Dhamaka is true to its nomenclature, it is a blast that shakes the very way movies in Bollywood are made.

One thing director Ram Madhvani is known for is how he extracts the best out of his protagonist in every film or show he creates. In Neerja, the otherwise average actress Sonam Kapoor gave her career-best performance. In the extremely mediocre series Aarya, only one thing shone – Sushmita Sen’s acting. And now Kartik Aaryan delivers his best till date in Dhamaka. Even though he looks a bit shaky in the initial few minutes, he gets back his poise soon and gradually lives under the skin of Arjun Pathak, the role he was essaying. His expressions especially at those vulnerable moments of confusion are pure gems. Truly speaking, I had never considered him as an actor. I am happy that I was wrong. Mrunal Thakur is earnest in her cameo. Amruta Subhash as the crooked boss of Kartik is over the top at times. Basically, this is a Kartik Aaryan movie and after almost a decade of acting in meaningless films, he finally gets a lifetime role and does justice to the opportunity. Maybe, through Arjun Pathak, Kartik realized that ‘Dhamaka’ could be the last chance to save the sinking ship of his career and he not only saves it but also makes it sail with the winning flag.

Dhamaka exposes the dark realities of the news business in the country in the present context and portrays how low the news channels can stoop to get their TRPs high. Do we have a channel that does not believe in drama and honestly intends to present news only? The wonderful dialogue of the anchor-actor-audience-drama quadrangle slaps the sick status of the news industry in India. It cleverly digs into the gutter of what rubbish in the name of breaking news, is being presented to us and what backend stories are there to make those non-news breaking news. The climax literally puts a question mark on our conscience as viewers of the garbage news being fed to us by the profit-seeking news channels.

There are certain moments where the director became overzealous and failed to remain restrained. Certain overdramatic moments could have been edited better to make the movie believable. The role of the police throughout the movie is ludicrous. Certain scenes appear to have been inserted only to create more shock values. Barring these cons, the movie excels in all other aspects. In no way, it is your Mills and Boons story where everything has a perfect ending. This attempts to be real and in many ways succeeds in doing so. This may be the reason why many will stay away from Dhamaka. Those risking to experience change will be rewarded heavily. Kudos to Ram Madhvani and Kartik Aaryan for taking a path less trodden.