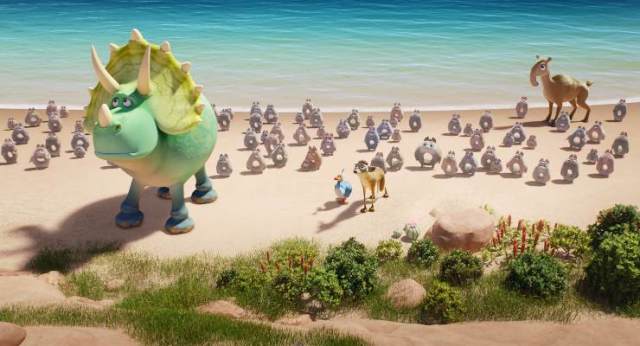 In vibrant animated outing Extinct, siblings Op (Rachel Bloom) and Ed (Adam Devine) are flummels – fluffy, doughnut-shaped creatures who live on a remote Galapagos island. Their ability to cause accidents wherever they go has labelled them as the outcasts of their group, but when they’re hurled through time to modern-day Shanghai via a strange flower, they discover that their entire species was wiped out mere moments after they left. Joined by a puppy voiced by Ken Jeung, alongside a collection of characters who were saved from their own extinction, the brother and sister must find a way to stop their own apocalypse.

Extinct is a colourful ball of energy where the gags keep on coming, helmed by a team best known for their work on The Simpsons (including The Simpsons Movie director David Silverman). Though not every punchline is as successful as the others, this family flick about time-traveling doughnut-shaped critters has a lot of surprisingly clever visual gags. It’s as suitably silly and inoffensive as expected from a child-friendly outing, but it’s the writers’ willingness to embrace the fun as much as possible with the script’s absurdist premise that makes the comedy work.

An extra-large helping of oddball characters is all fine, but the snappy performances from Bloom and Devine are what really steal the show. Their lightning-fast deliveries and bubbly chemistry make them a fantastic combination and incredibly entertaining to watch.

Despite its admirable commitment to its premise, however, Extinct struggles to deliver a coherent narrative. It’s unable to focus on one plot point for more than a few minutes before moving onto something else – a puzzling move that gets tiresome rather quickly. At one point the plot looks to be setting itself up to be a time-travelling adventure, where the heroes must journey through various points in time in search for something. Frustratingly, this potential amounts to little more than a brief montage sequence before moving on to the next beat.

Regardless of its unique characters and oddball set-up, Extinct winds up being another derivative family affair, complete with an uninspired villain and annoying musical number. The non-stop gags soften the blow, however, and will make sitting through this one a mostly painless experience.