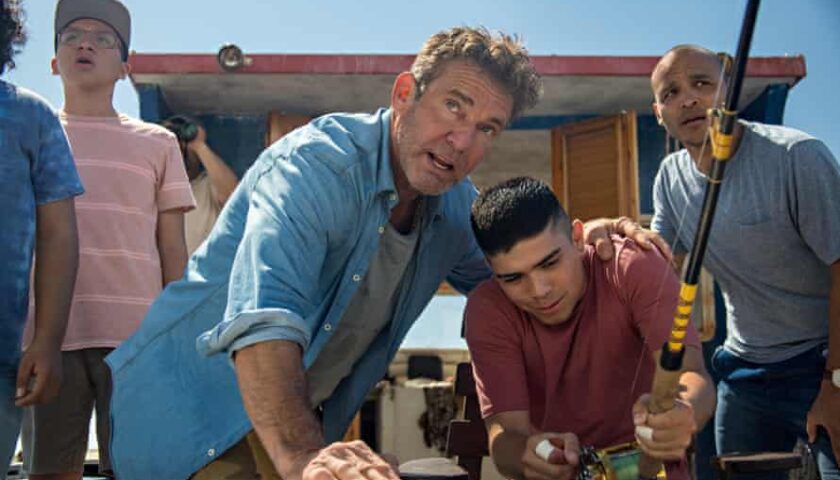 Many a chef will tell you that fish and cheese don’t go together, but “Blue Miracle” says otherwise. Based on the true, headline-making story of an amateur Mexican team who won the world’s richest fishing tournament in 2014, Julio Quintana’s likable family film misses nary a cornball trick in Hollywood’s underdog-drama playbook, and just about pulls it off.

Viewers can see precisely where Quintana and co-writer Chris Dowling have embellished the saga of Cabo orphanage proprietor Omar Venegas, who led a handful of his teenage wards to that unlikely victory: “Blue Miracle” is awash with eleventh-hour peril and contrivance, reducing characters to stock figures to make plain sailing of its crowd-pleasing narrative. Audiences are unlikely to mind as they discover the film on Netflix: It’s a processed fish stick rather than a blue marlin steak, but it fills you up just the same.

That “Blue Miracle” succeeds to the extent it does is in large part thanks to star Jimmy Gonzales, hitherto best known for TV roles in “Lodge 49” and “Mayans M.C.,” here proving himself a leading man of quiet, sturdy integrity. As Venegas, Gonzales is sufficiently terrific to make you wish the character had been written as the fully dimensional human he presumably is, rather than as a terrestrial saint in cargo shorts: Venegas’ through-and-through goodness is apparent enough without the repeated moral pep talks the script keeps handing him for backup, though Gonzales delivers them with genuinely heroic conviction. He’s honey to the vinegar of Dennis Quaid, cast in the largely devised role of the crusty gringo fishing captain who shows the team the ropes and reels. This of all stories hardly needs a white savior figure, but Quaid’s flinty dynamic with Gonzales lends some texture to this soft, sentimental tale.

Streamlined and simplified as they are, the film’s two adult leads have clear agency and film-driving personality. Their younger cohorts, though appealingly cast, are a little more lost in the mix, with characterizations that extend to single, contrasting adjectives: the smart one, the snarky one, the brooding one, and so on. (The wholly English-language dialogue, peppered only with light interjections of Spanish slang, contributes to the uniformity.) “Blue Miracle” introduces Venegas and his wife Becca (an anemic role for “Narcos: Mexico” star Fernanda Urrejola) as surrogate parents to a couple dozen orphaned and/or troubled Mexican boys, rescued from the Cabo streets and integrated into one chaotically happy family at their modest institution, Casa Hogar.

But “Papa Omar,” as the kids call him, can’t run the shelter on his benevolence alone: Funds are low, debt is high, and the bank is threatening to take the roof from over their heads. What can they do but enter Bisbee’s Black & Blue Fishing Tournament, held annually in Cabo, where prize money tops a quarter of a million dollars for the largest catch? That solution might sound like a desperate screenwriter’s last resort, but it’s no flight of fancy. The lucrative event does indeed exist, and Venegas, along with a crew of Casa Hogar orphans, did indeed enter it to raise funds, despite never having fished before — taking advantage of unusual circumstances that saw the tournament waive its usually prohibitive entry fee.

Pretty much everything else around that premise feels programmatically invented, from the reluctant, gradually thawed allyship of Quaid’s salty-seadog captain Wade Malloy — a former Black & Blue champion with his own demons to drown — to the neatly placed obstacles that keep the team battling against the current until the last possible minute. Co-writer Dowling’s previous credits include such faith-based, goal-oriented features as “Priceless” and “Run the Race,” and minus any direct religious overtones, “Blue Miracle” follows much the same formula to nominally inspiring (if not inspired) effect.

That Quintana rose through the ranks as a protégé to Terrence Malick — who executive-produced his 2016 debut “The Vessel” — is less obvious, given the film’s Disney-inflected storytelling and bright, straightforward filmmaking. It’s in the orphanage scenes, surprisingly, that he and cinematographer Santiago Benet Mari are most visually imaginative, painting its dank, under-funded interiors in enough shades of shadowed blue to rival the ocean itself, though the metaphorical parallel just lies there. The film’s waterborne sequences, by comparison, are more prosaic, assisted by digital effects that fall somewhat short at climactic angling moments. The generic swells and swoops of Hanan Townshend’s traditional scoring give way only in the closing credits to the punchier uplift of Christian Latino hip-hop artist GAWVI: “Blue Miracle” would benefit from more such flavor, but it knows what works.