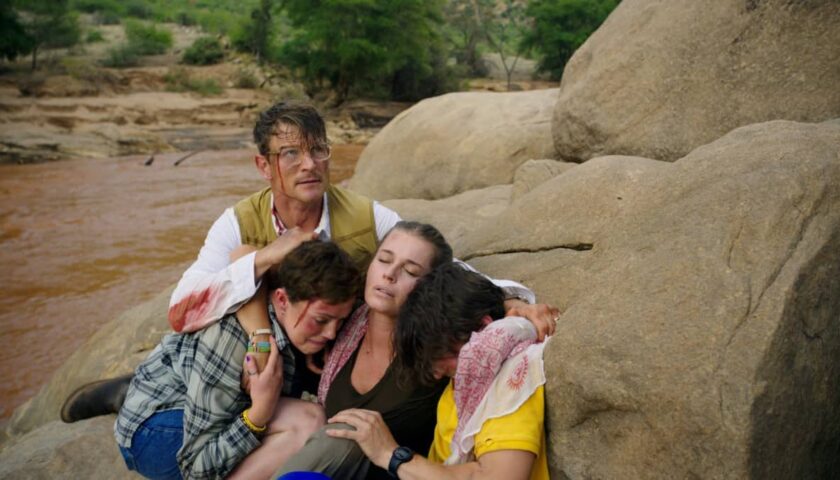 We expect a rich American family to bring a lot of luggage with them on a trip to Africa, but in Endangered Species, this particular family brings a lot of unnecessary baggage, too. Co-writer/director M.J. Bassett’s movie is a survival story, about a group of ill-prepared people stranded in and trying to endure the heat and wildlife of a Kenyan national park. The major question, though, seems to be whether or not they—and, for that matter, we—can survive all of the melodrama they’ve taken with them on their doomed safari.

There’s a lot that’s wrong with this movie, from the plot, which depends on these characters making every bad decision they possibly could under the circumstances, to its laughably cheap visual effects. Regardless of such issues, there’s still a possibility that such a movie could work, either as some legitimately dumb fun or as an unintentional joke (It could have been an intentional one, too, but Bassett’s actual intentions, announced by a signed statement before the credits roll, are too sincere for the director to have a laugh at this story). The actual experience, though, is far from fun, because the material is played with such severity, and, because the shallow interpersonal drama is seen as such serious business, doesn’t offer much at which to laugh.

The story revolves around the Halsey family, who has come to Kenya on vacation. Jack (Philip Winchester), the father, and his wife Lauren (Rebecca Romijn) have brought their son Noah (Michael Johnston) and her daughter/Jack’s stepdaughter Zoe (Isabel Bassett, the director’s daughter, who also co-wrote the screenplay). The issues between these family members become apparent immediately and, despite all of the danger that lurks ahead for them, never stop until the plot comes to an end.

Jack is having trouble with his kids. Zoe has left college and seems to have no plans to return. She’d rather hang out with her comic-relief boyfriend Billy (Chris Fisher), who comes close to death a few times here but doesn’t let that stymie his willingness to crack a joke, and repeatedly tells Jack that he’s not her real father. Meanwhile, Noah has a boyfriend back home, and Jack seems pretty uncomfortable with that fact. The father insists it’s just because he doesn’t want a romance to get in the way of school (simultaneously getting in a dig on Zoe, the passive-aggressive guy) and Noah’s athletic prospects, but the son catches the meaning beneath all of those excuses.

As for Jack, Lauren discovers that her husband, who works in the oil industry, has been put on administrative leave after an “incident” involving a spill. They don’t really have the money to afford this trip, but Jack kept that from everyone. To cut costs, he decides that the family should go on their own, unofficial safari in their rented van. The family leaves the resort where they’re staying without checking out, so no one will know to look for them if something happens.

Something, obviously, does happen, when the van comes between a very digital rhino and its equally digital calf. The resulting attack leaves the clan stranded in an overturned van, with a few injuries, without any water or air conditioning, and with the looming threat of Lauren’s diabetes putting her into a coma (The way she goes from near-death to being able to walk for miles upon end is conveniently impressive).

Other perils include a pack of hyenas (just as overtly digital as the rhinos), which seem to go against their scavenging instincts to hunt the family (There has to be a reason, after all, for them to abandon the simple and, as it turns out, best idea to survive, which is simply to stay put until help arrives—as it does for one character, at least), and a leopard that jumps into frame at a most unexpected moment. The timing is accidentally funny, but so, too, is seeing a real leopard standing in for the visual effect, before we’re given confirmation (not that we really needed it) of how cheaply rendered these digital animals are. Somehow, the family continues making choices that constantly have less common sense than every previous decision, and for some reason, they continue bickering about all their other, unrelated problems as they’re confronted with deaths by dehydration, animal attack, or even murderous poachers.

The poaching angle eventually becomes Bassett’s point with Endangered Species. It’s a sincere message, obviously, but one that’s overshadowed and diminished by the movie’s cheap construction and even cheaper execution.