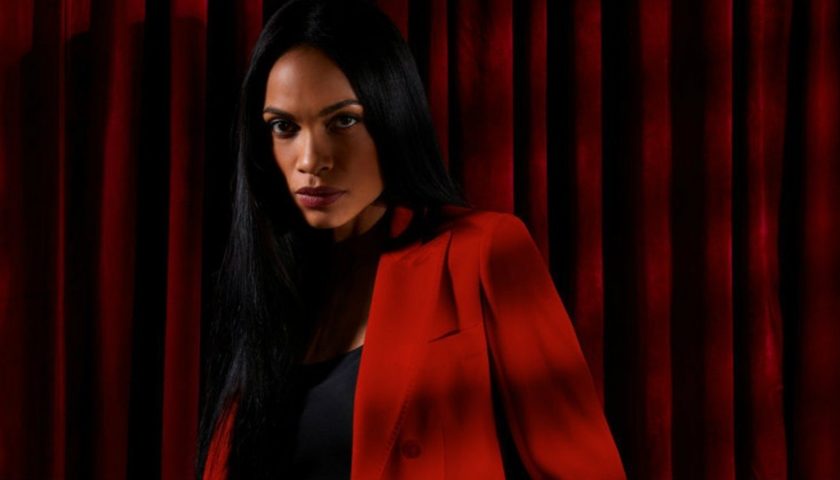 USA’s Briarpatch is a mystery with series dysmorphia. The adaptation of Ross Thomas’ novel has the spine and spirit of a down-and-dirty pulp thriller, but when it looks at itself in the mirror, it sees a Southwestern version of Twin Peaks.

The first two Briarpatch episodes, premiering at the Toronto International Film Festival, aren’t surreal or evocative enough for the latter and they lack the gut-level pleasures of the former. Still intriguing due to the charisma of star Rosario Dawson and a superb and quirky cast, Briarpatch just isn’t twisty or funny or sexy or brazen enough to whet my appetite for the series’ USA premiere way off in early 2020.

Dawson plays Allegra Dill — people call her “Pick,” short for “Pickle” — an investigator working for an ambitious senator (Enrique Murciano), who returns to her mid-sized Texas hometown of San Bonifacio after her sister, a local detective, is killed. After getting tossed back into the proverbial briarpatch of her youth, Pick discovers several things: Her sister seemed to have an amount of money that points to corruption and may have contributed to her death. Her sister was loosely engaged to an already married fellow officer (Brian Geraghty). This is a good opportunity for her to depose, and rekindle affections with, her childhood chum Jake Spivey (Jay R. Ferguson), an outsized eccentric whose wealth comes from running guns with or for an internationally wanted dealer being pursued by Pick’s senator boss. Oh, and there was a breakout at the local zoo and wild animals are roaming freely.

That’s a lot of history and background for series creator Andy Greenwald to fill in — Edi Gathegi plays a chatty local lawyer whose name might as well be “Exposition Jones” — and a lot of mysteries to introduce. Briarpatch is least successful establishing itself as a whodunnit, which is partially a product of Pick’s character. She’s a cool woman in a hot place, and it’s a running plot point that Pick and her sister weren’t especially close. She’s trying to solve a murder that she cares about only because she knows she’s supposed to, an investigation that’s about as low in urgency as would be possible in a situation involving mass car-bombings. I think it’s the intent to treat Pick as dispassionate and methodical in a way that the genre has traditionally coded as “masculine,” an idea that works on a character level yet could still have included a puzzle more likely to at least engage the viewer. Put more simply: There was no point at which I was invested in who killed Felicity Dill or what she was up to that got her killed.

The attempts to craft hard-boiled dialogue between the characters are better, though the exchanges are rarely as stand-alone-clever as the show, prone to grinding to a halt for attempted banter, thinks. Playing the taciturn Humphrey Bogart-style role, Dawson distributes an effective weary scorn throughout and she parries well with a versatile cast that features very fine work from Kim Dickens and Chris Mulkey as higher-ups within the local police force, Charles Parnell as a food-loving fixer for Pick’s senator boss and a scene-stealing Timm Sharp as a redneck quickly defined by his mullet and tighty-whiteys. I can’t quite tell if Geraghty’s blandness is intended to be enigmatic, nor what Gathegi’s character does when he isn’t popping up to over-explain things.

The performance that really brings Briarpatch to life is Ferguson’s, showcasing a reprise for his bushy Mad Men beard and enough scenery-chewing energy to occasionally propel the show even in his absence. It takes a lot of commitment to pull off the sort of character who boasts a 10-gallon hat, a longhorn mount on the grille of his car and swaggers through the world on a never-ending coke binge, but Ferguson is on fire.

Speaking of the heat, and everybody in the show constantly does, Briarpatch features a cheeky BBQ sign that keeps us updated on the soaring temperature in San Bonifacio. Oddly, it doesn’t look hot. Or feel hot. That’s not lamenting the lack of A Time To Kill-esque perma-sheen on every actor, but to the degree that you can capture “swelter” onscreen, Briarpatch never does. This would be a flaw or choice within the show’s otherwise fine photography, which utilizes Albuquerque locations in a way that largely avoids overlap with the Breaking Bad universe.

Briarpatch is also one of those shows in which a cinema-trained director comes in on the pilot, establishes one look and then the second episode looks head-scratchingly different. Director Ana Lily Amirpour (A Girl Walks Home Alone at Night) and cinematographer Tod Campbell bring tight close-ups, shiny surfaces and some amusement with the quirky animals running amuck to the pilot. The second episode, directed by Steven Piet and shot by Zachary Galler, doesn’t exactly look worse or cheaper, but it doesn’t look the same and basically forgets about those escaped animals entirely. The second episode likely provides more of an ongoing template, represented more by use of abandoned storefronts and empty parking lots than the flashier border lodge-style hotel Pick is staying at. That’s not a bad thing, just a thing that makes it hard to pinpoint an initial tone.

So maybe my reservations about Briarpatch are less about the gap between the way it sees itself and the actual story it’s telling, and much more about the fact that it will arrive on-air in the process of finding itself. That’s not hugely surprising given that former TV critic Greenwald is a newcomer to the TV creating business (even with much more established Sam Esmail as a guiding executive producer). Maybe Briarpatch will become trippier and stranger as it establishes its footing. Or maybe it will become funnier, sexier and more viscerally compelling. It’s currently stuck somewhere in the middle, not really all that satisfying but not without potential.