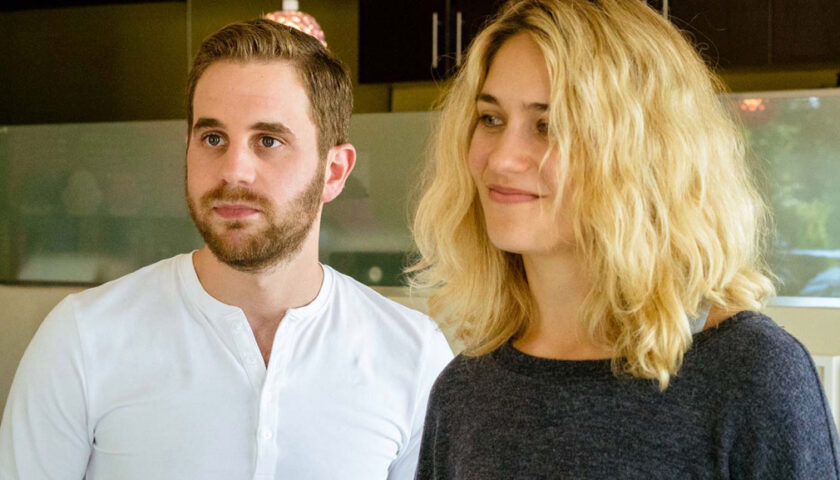 The romantic notion of a trip to Paris, for self-discovery and artistic renewal, helps an unfulfilled aspiring writer get up every morning in Peter Sattler’s mental illness dramedy “Broken Diamonds.” Scott (Ben Platt) is looking to escape his job as a waiter and the family ties that have diminished his sense of agency. The film’s rather trite title surfaces from a conversation about the pricy option to turn someone’s ashes into a precious gem, as well as the even more saccharine metaphor about how people can be beautiful even when emotionally wounded. It’s nothing enlightening.

But as the perpetually anxious Scott (or “Scotty,” referring to the pet name that reinforces his feelings of powerlessness), settles his affairs to move to France, his father suddenly dies. Step-mom Cookie (an underused Yvette Nicole Brown) takes care of most loose ends, except Cindy (Lola Kirke), Scott’s older sister suffering from severe schizophrenia.

The effects of the condition are not observed from the POV of the patient, but the caretaker who is unprepared to handle the draining day-to-day ups and downs. Begrudgingly, Scott takes on the responsibility of finding Cindy a job and convincing her to sell their dad’s home. In turn we reluctantly accompany them on their bonding misadventures.

Screenwriter Steve Waverly forces the narrative to have humor in moments that do not seem organic, like when Cindy does yoga in the middle of an elegant party. The exaggerated physical display appeals to broad physical comedy, but one could more easily perceive it as an unfortunate event.

The tone rarely hits its target for dark levity, often making one wonder, “Was that meant to be funny?” Radiant childhood flashbacks, à la “The Tree of Life,” attempt to fill us in on the trauma that both siblings experienced growing up, and the closeness of their relationship before Cindy showed symptoms. Though a pointed aesthetic choice, these clips offer limited insight.

An endearing performer, Platt projects a downbeat quality in nearly every part he plays. His characters have something to prove, a heavy chip on their shoulder that tends to drive them to extreme decisions, like flying across the Atlantic for the promise of inspiration. In this age-appropriate role, the conflicting forces within Scott are his heroic patience for Cindy and a brewing frustration.

It would seem harsh to say Kirke’s portrayal of the schizophrenic young woman falls into parody, even if some of the situations, like her burning a lamp or running away, are at times played for laughs (even if they don’t produce that effect). The actress creates Cindy with a bubbly persona that operates with extreme sincerity and unruliness. Kirke’s internal turmoil only manifests for us as Scott experiences it: in her reactions or the unintelligible sentences she articulates. Sattler, thankfully, refrains from employing magical realism to show what Cindy hears or sees.

Platt’s believable distress saves critical scenes from losing steam, as they point to the two-way street of dealing with such a diagnosis. Though her life was clearly interrupted, Scott’s status as the “normal” sibling resulted in a lack of attention and encouragement. Waverly forgets about Scott’s passion for the written word for most of the story until the end, and there are no clues as to how this craft enriches his existence.

On a slightly more positive note, late into “Broken Diamonds” Sattler features some real-life individuals dealing with a variety of mental illnesses and family members of others in similar situations. A point is made about all those affected directly and indirectly, and the support systems that exist to make the vicissitudes more manageable. Too bad their lived honesty didn’t inform the rest of the picture more noticeably.