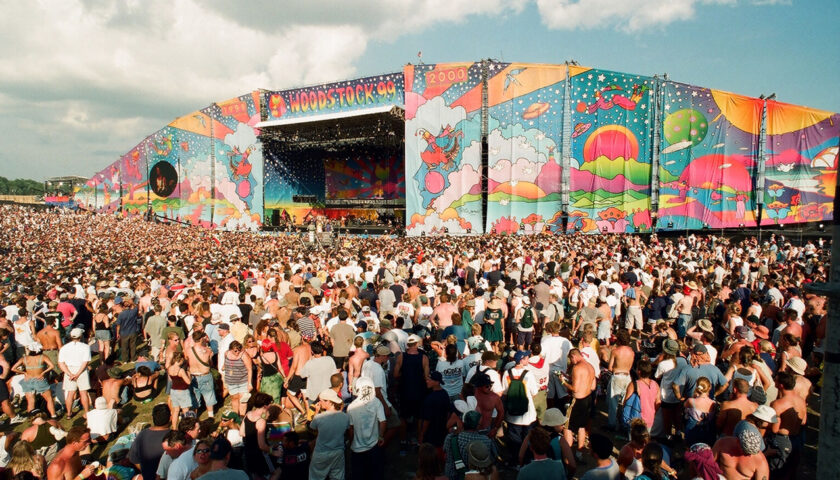 That ain’t teenage spirit you’re smelling. HBO’s Music Box documentary Woodstock 99: Peace, Love, and Rage reeks of righteous condemnation, judicial indiscretion, and conspiratorial obfuscation. But it’s okay. This is a disaster film masquerading as a documentary, and the found footage makes it all pay off. Director Garrett Price personally opens the film in the voiceover, explaining how the 1999 celebration itself was written to be a comedy, but “played out much more like a horror film.”

Music festivals have come to represent generations. The original Woodstock: an Aquarian Exposition: 3 Days of Peace & Music concert in the summer of 1969 brought half a million people together with the artists who spoke for and to them in a communal love bond. The organizers lost money, the capacity was underestimated, but the audience came together to share what they had to make the weekend legendary. In December that year, the Rolling Stones concert at Altamont was marred by the pool cues and knives of the security team, the Hells Angels. It was deemed the end of the ‘60s.

Woodstock ‘94 happened at the height of the Grunge Revolution, when Kurt Cobain wore a dress but didn’t shave his stubble, and Riot Grrrls blasted personal dissent with the passion of the punk elite and no one cared if they shaved their legs. The organizers lost money, but the fans and the bands were one unit who achieved the common goal of joy. Woodstock ‘99 happened five years later and enjoyed the accessibility of the mainstream’s greatest unifier: MTV. The organizers made money and 200,000 people attended, but the audience got such a raw deal, even the musicians who played got scared. It is remembered as “the day the ’90s died.”

Opening on the 22nd anniversary of the festival, the documentary deems Woodstock ’99 a disaster. They even call in a guy from FEMA, who says it was worse than Hurricane Katrina and the great flood. Told chronologically, Price, who previously directed Love, Antosha, the 2019 tribute to Anton Yelchin, begins with the excitement of a three-day festival.  Held on a former military installation in Rome, New York, the Griffiss Air Base was set up to keep the grounds free of ticketless celebrants.

The security team is exposed as a bunch of amateurs specially trained on which boxes to check in a multiple-choice test, and how to find someone’s personal stash of bottled water in a backpack. “There’s a festival grounds in Germany that was literally built by Hitler,” The Offspring’s guitarist Noodles says in an interview. “It’s a great venue, a lot of fun. The air base was less hospitable than the venue built by Nazis.”

There were nonstop performances held a mile apart from each other on the grounds. One highlighted its mosh pits, the other the dance floor. The biggest electronic artist in the Rave Tent proves his genre’s atmosphere opens doorways to perception. “There is a sixth sense that you develop when you spend your life going to venues,” Moby says in an interview. “We got off the bus and I was like, ‘Something is not right.’”

The film is very generous with behind-the-scenes footage. We are treated to aerial shots of cramped campsites, long ATM lines, leaky Port-O-Potties oozing something that only looked like mud, and $4 water bottles, which sold as much as beer in temperatures over 100 degrees. We are told in advance three people died, 44 were arrested. There were 10 reported sexual assaults.

The lineup for the concert was a mix of hard rock bands, pop stars, and hip-hop acts like The Roots, and ICP. Rapper DMX’s epithetic call and response performance gets special notice. “The Black performer is essentially licensing the people in the crowd to say this word with him,” New York Times’ Wesley Morris says in an interview. “If you got each one of these guys after the show, and pulled them aside and said, ‘is it OK to say the N-word under any circumstances?’ They would, to a person, say, ‘I mean, the right answer is no, right?’”

For returning music aficionados with remnants of the first gathering still in their memories, organizers booked jam bands and a few older acts like Elvis Costello, Willie Nelson, and The Who’s John Entwistle. “The ’99 Woodstock seemed like it was trying to relive a nostalgic moment, along with commercialism and capitalism, but not having a real soulful purpose for the show,” singer-songwriter Jewel says in an interview.

As the documentary points out, a lot of the younger attendees had no idea what Wyclef Jean was referencing in his solo guitar performance of “The Star-Spangled Banner.” They ask one kid, who can’t remember who did it first even though he’s standing directly under a huge stencil of Jimi Hendrix’s name. When Bush’s Gavin Rossdale begins Country Joe & the Fish’s “Gimme an F,” the chanters only seek Amy.

Music is supposed to have charms which soothe the savage breast. Many people think the final word of the phrase is “beast,” and the documentary further blurs the line. The early ‘90s music artists were anti-misogynist, anti-racist, anti-homophobic and radically informed. Happening at the end of the Clinton era, when MTV pitted boy bands and pop girls against nü-metal rockers, a fur-coated Kid Rock could call Monica Lewinsky a ho and pass it off as a political statement.

Toxic masculinity’s dirty sister framed Britney Spears as a “Girls Gone Wild” extra, and magazines like Maxim and FHM encouraged the idea young men could shout “show your tits” to Rosie Perez without getting bitch-slapped, the documentary posits. Only three women were invited to perform at the weekend-long, two-stage festival: Jewel, Alanis Morrissette, and Sheryl Crow. “I’m baffled how it went from the progressive, enlightened values of Kurt Cobain and Michael Stipe to misogyny and homophobia and the rape-frat boy culture that was at Woodstock ‘99,” Moby ponders in the film.

Of course, none of wouldn’t have happened if it wasn’t all pre-staged. This is where Price dips into the era’s obsession with paranoia. It was the end of the millennium, the Columbine shootings had happened, and the Y2K bug was coming. It was finally time to party like it’s 1999. “Really, the biggest problem was that MTV set the tone,” organizer John Scher says in an interview.

But he downplays it, like he might have been warned by Cigarette Smoking Man from The X-Files. “There’s no question that a few incidents took place. But if you go back in the records of the police and state police and stuff, we’re not talking about 100. Or even 50. We’re talking about 10. I am critical of the hundreds of women that were walking around with no clothes on, and expecting not to be touched. They shouldn’t have been touched, and I condemn it. But you know, I think that women that were running around naked, you know, are at least partially to blame for that.”

Partial blame is all the rage in Woodstock 99: Peace, Love, and Rage. The documentary points out how history paints the original Woodstock like it really was a return to the garden, with peace and love and former flower children having babies to Santana’s “Soul Sacrifice.” But music journalist Steven Hyden reminds us about a group of disgruntled shoppers called “’The Up Against the Wall Motherfuckers,” who didn’t like food prices and burned dozens of stands down.

After Woodstock ’99 grounds started smoking when the candles handed out for a vigil for Columbine victims became torches to burn the place down, the documentary says Rome Mayor Joseph Griffo asked Anthony Kiedis to douse the crowd’s misplaced enthusiasm. The Red Hot Chili Peppers launched into a scorching rendition of Jimi Hendrix’s “Fire.” History blames bands like Limp Bizkit, Korn, and Rage Against the Machine for the destruction. But really, the artistic decision of that song to those circumstances is a no-brainer. “Smoke on the Water” would have been too easy. “Disco Inferno” would have been too obvious.

The documentary talks with the event’s organizers, as well as performers like Korn’s Jonathan Davis, The Offspring, Scott Stapp of Creed, The Roots’ Black Thought. Wesley Morris and Spin‘s Maureen Callahan put things into perspective. The only person the documentary doesn’t talk with is Fred Durst, the frontman for Limp Bizkit, who became the poster boy for the event’s bad behavior. Oh, they talk about him, though. They talk about him like he’s not there, and because he’s not there they must think he won’t see it. At the height of Limp Bizkit’s set, the singer encouraged the crowd to “Break Stuff.” But let’s be fair, it is the name of their song, and Durst is the guy who told the crowd to pick someone up if they fall, not to grope them.

This is what happens when the counterculture makes money. Everyone wants a piece. Woodstock 99: Love, Peace, and Rage is an even-handed dispenser of blame, and has slices for all. The first in a series of music-based documentaries from Bill Simmons’ Ringer Films, this immersive journey bodes well for upcoming tunes.