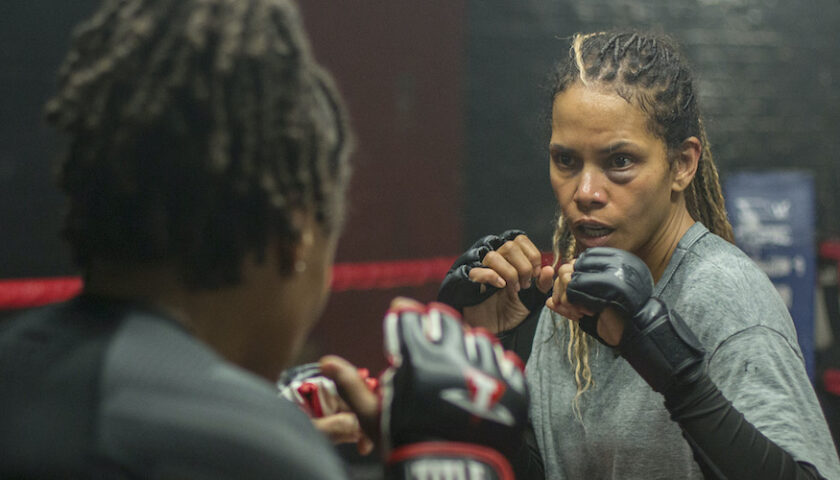 Fictional UFC fighter Jackie justice (a muscular and unrecognizable Halle Berry, also making her directing debut from a script by first-time narrative feature writer Michelle Rosenfarb) is first seen in Bruised getting her bell clocked in the octagon to the point of retreating and escaping as if it’s a professional wrestling cage match. Now, movies don’t need to follow or re-create combat sports down to total authenticity, but such an exaggerated opening marks an early telltale sign that this story will likely manufacture preposterous drama in favor of characters that feel like real people. That’s also a shame considering Halle Berry has made quite the physical transformation and delivers a solid performance as the self-pitying takedown artist, but then again, it’s also her movie.

Immediately after that rough loss, there’s a flash-forward to Jackie cleaning up a fancy house presumed to be hers until the editing cuts to a brief scene of a teenager that actually lives there filming her changing clothes. Apparently, it’s not the first time the boy has been creeping, so the hotheaded Jackie loses her cool, destroys his phone, and mildly lays a finger on him. She’s out of a job.

Jackie’s temperamental boyfriend Desi (Adam Canto) reacts by scolding her for feeling content serving as a maid for rich people. He wants her to get back into MMA, to which she seems to no longer have the fire to do so. A shouting match breaks out filled with expletives, leading to a spontaneous bout of sex. A dysfunctional, toxic relationship is established where it’s clear that Desi will do anything to get the breadwinner back inside the cage. He takes advantage of the situation bringing her to an underground fight club. A situation breaks out, angering Jackie into taking down a behemoth of a woman over twice her size. From here, various characters use Jackie’s anger as a source of motivation for skilled fighting, which is strikingly illogical as one would assume technique and a well-rounded offense/defense would be most important.

For most sports movies, this would already service enough conflict to drive what is already set up to be a cliché comeback story, but Buried has more in store. Jackie’s six-year-old son is dropped off by her ex-partner’s girlfriend on her mother’s doorstep in the wake of a fatal shooting while undercover claiming the life of the father. The film even has such on-the-nose lines referring to Jackie as a fighter, not a mother. Get this: young Manny (Danny Boyd Jr.) is also so traumatized he cannot talk.

Containing baggage with her own mother, Jackie decides to step up and start providing again, this time for Manny. She accepts a new manager that hotshots her to a championship match inside an MMA minor-league and begins training under the fierce but collected Buddhakan (Sheila Atim), who lays on the thick metaphor that Jackie does not protect herself in a fight. For whatever reason (perhaps the emotional terrorizing paralyzes her), no matter how explosive and bursting with rage Desi becomes (the movie is so over-the-top that he destroys Manny’s musical instruments after the child accidentally starts a small microwave fire while the adults exchange curse words of one another for minutes on end), Jackie never fights back or lays a finger on him. Yes, he still outsizes her, but it’s also a tough sell that she wouldn’t get tired of his shit, grappling him to the ground and slapping on a chokehold until he finally shuts the fuck up for good. The whole boyfriend character is a caricature of toxic masculinity that simply feels hollow and unearned.

In the bigger picture, that’s only a tiny fraction of what’s wrong with Bruised. This film continues to pile on personal squabbles (once Desi disappears from the story, the same scenes are essentially replaced but now with arguments between daughter and mother over childhood abuse), only to toss in a forced romantic subplot in the third act. Occasionally, there are some quietly emotional scenes from Jackie spending time with Manny or moments of personal growth, such as Jackie kicking her bad habits pouring out all the alcohol. Sheila Atim is also reasonably good as she trains Jackie while looking out for the well-being of Manny by advising on what to do whatever fighting in the broken home breaks out. She’s a compassionate, sweet soul that comes across as an actual person, at least until the writing fails her too.

Naturally, Bruised comes down to the championship fight, which, while the stakes surprisingly don’t feel high, is nonetheless well shot, hard-hitting, and brutal to behold. That doesn’t necessarily save it from tropey trappings, but Halle Berry assuredly impresses in her attempts to mimic the combat sport even if it’s highly chopped up and edited. However, everything that comes before is so amateurish, familiar, and frequently stretches believability that the narrative comes out most bruised.