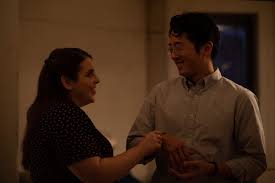 Every film made in response to 9/11 is a horror film in one way or another, but none of them — from the unbearable simulation of “United 93” to the eerie found footage of “Cloverfield” and the chilling-that-this-was-nominated-for-Best-Picture-ness of “Extremely Loud and Incredibly Close” — have spoken the genre’s common tongue more fluently than “The Humans.” And yet, for a movie which opens with a thunderous jump-scare that it follows with another solid jolt every few minutes before ending with the year’s most pitch-black sequence of pure terror, the biggest shock of all might be that Stephen Karam’s debut feature is so conventionally scary in the first place.

A prestigious screen adaptation of a Tony-winning play is just not the sort of thing that one expects to watch between their fingers, even if it stars legendary scream queens [checks notes] Beanie Feldstein, Amy Schumer, and… June Squibb? Indeed, even those familiar with Karam’s widely fêted one-act may be rattled by the extent to which “The Humans” eventually blurs the line between Chekhov and Polanski — Broadway and Blumhouse.

The result is a stilted and unnerving film that chips away at the petrified staginess of its origins with every sudden noise, as if Karam were sledge-hammering little cracks into the hull of his film’s WASPy modern family. Over time, patriarch Erik Blake (Richard Jenkins) takes on existential dread like ocean water until his once-unsinkable sense of self is nothing but a ghost ship washed to shore a few blocks from where the World Trade Center used to be.

The first thing we notice about “The Humans” is also the first thing that Erik notices about the unfurnished Chinatown apartment in which virtually all of this movie takes place: the sound. It’s Thanksgiving — a holiday that always hinges on slaughter, even when it’s not celebrated in the absent shadow of the Twin Towers — and Erik’s composer daughter Brigid (Feldstein) has invited the whole family up from Scranton to help christen the creaky old place that she’ll be sharing with her people-pleaser of a boyfriend, Richard (Steven Yeun).

Water drips from the ceiling, a boiler hums down the hall, and the pre-war floorboards groan as if senile grandma Momo (Squibb) were being pushed over them in a tank instead of a wheelchair. But what really frays Erik’s nerves, and ours, are the intermittent thuds from the tenant upstairs. “This is New York,” Brigid says, trying not to roll her eyes. “People are loud.”

And yet, the second thing we notice about “The Humans” is something that no one in the film itself seems to hear: the silence. People are loud, but New York is even louder — except here. No honking car horns bleat through the windows. No airplane jets scream overhead. No unapologetic voices carry up from the sidewalk, which proves eerie in a town that talks to itself in order to spare the people who live here from the white noise of their own thoughts. Here, Karam has made a movie that sounds like a play, which is far more unsettling than a play that sounds like a movie; combined with the ashen November sunlight, the effect is so purgatorial that it feels as if the Blake family may already be dead, their monologues delivered from beyond the grave like a version of “Spoon River Anthology” that’s been squeezed into a duplex.

Not that this two-story apartment is as grim as the script’s obsession with money would have you believe; Brigid may not have gotten the grant she wanted (which is funny when you consider that her baroque music was composed for the movie by the prodigiously talented Nico Muhly), but anyone under 40 who can afford to live in a turn-of-the-century tenement unit with its own corkscrew staircase is doing just fine, no matter how much urine water leaks down from the ceiling. All the same, “The Humans” was written in the aftermath of the Great Recession, and Erik — a worrywart to begin with — seems extra triggered whenever finances are mentioned, even though his observantly religious wife Deirdre (Jayne Houdyshell) appears to have more faith that things will sort themselves out.

“Don’t you think it should cost less to be alive?” Erik asks no one in particular at one point, turning to his family with the same pitiable grin that Jenkins has weaponized in so many different performances over the years. Nobody is better at playing characters who insist upon your sympathy only to lose sight of it the moment it’s surrendered to them, and Jenkins has never embodied a more desperate character than the one he does here, nor one so incapable of escaping his own head.

And we’re all trapped inside of it with him, as the set gradually starts to become less of an apartment than a state of mind. As with so many airless Broadway plays (and the movies adapted from them), secrets are stitched into the inseams of every line, information is doled out with the self-satisfaction of charity, and nervous chatter about all sorts of nothing spackles over the underlying anxieties like cheap makeup. The ever-upbeat Richard doesn’t know how right he is when he insists that his video of a crackling fireplace — projected from an iPhone onto a cold patch of white drywall that it disguises underneath — is “setting the tone.”

Richard has the biggest reveal up his sleeve, but everyone is hiding something. For Brigid’s older sister Aimee (Amy Schumer, compellingly naturalistic in a dramatic performance that keeps things from going full “Cherry Orchard”), it’s the pain she carries from recent heartbreak, career failure, and the medical-grade diarrhea that contributed to at least one of those crises. For Momo, whose dementia is so advanced that she only speaks in gibberish save for one dramatic exception, her entire self has slipped beneath the surface. These details tend to be sketched rather broadly, as Karam’s writing turns vague when broaching the way that people retreat inwardly from existential threats, which are quiet when you’re young, grow louder as you get older, and can spike across entire generations all at once when buildings fall and our defenses crumble along with them. What Brigid can tune out or chalk up to life in the big city, Erik hears pounding in his head like the tell-tale heart.

Karam’s aim is more precise when it comes to the strangeness of family, and the unsolvable embarrassment of belonging to the same people you dread losing the most. Beyond the occasional jump-scare to lighten things up, the first half of “The Humans” is almost as ghoulish as watching someone watch you spend an afternoon with your own family, and considerably more arch. Characters are always rearranging themselves this way and that, as if their individual disappointments and shared unhappiness were a simple matter of human geometry; in doing so, they’re also orienting us to the layout of the apartment so that the movie’s final 15 minutes can instill a sudden panic of dislocation.

“The Humans” grows stronger as it migrates from mind to body — day to night, talky drama to outright horror — and we begin to sense that the creature from Erik’s nightmare about a woman with skin pulled over her face might pop out at any moment like a Babadook-esque manifestation of life’s bitterest disappointments. Karam takes to the genre like a serial killer to a summer camp, setting up jump-scares with a precision that could land him a gig directing the next “Insidious”sequel if he’s not careful. Still, these jolts are less unsettling on their own than they are for the cumulative power they accrue at the end of a movie less attuned to individual fears than it is to the crushing weight of fear itself, which is always looking for a crack in the wall that it can seep through and sink you.