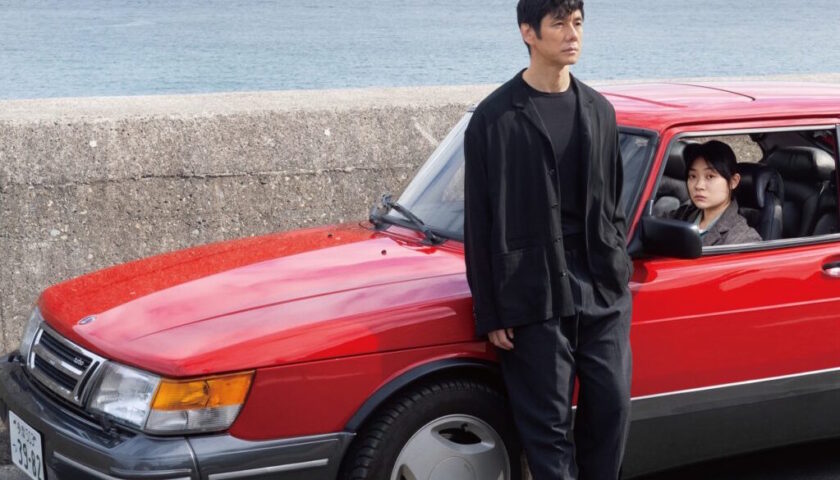 The prologue of Drive My Car is almost a movie entirely into itself, as the opening credits to this three-hour behemoth don’t begin until the 40-minute mark. However, it’s all necessary, as we are introduced to Yûsuke Kafuku and Oto (Hidetoshi Nishijima and Reika Kirishima, respectively), a married couple with individual ties to the film and TV industry. The relationship is also not as tight as they might believe, with Kafuku essentially in denial even one forced to witness devastating truths. On top of that, a vehicle accident in the titular red car has partially damaged his left eyesight, and a personal tragedy plunges him into grieving.

The story picks up with Kafuku traveling to plot a multi-language theatrical production of Chekhov’s Uncle Vanya, which ties to the inner pain in various ways. It’s not so much that one needs to be familiar with Chekhov to get the most value and meaning out of Drive My Car, but that writer and director Ryûsuke Hamaguchi (collaborating with Takamasa Oe, together spinning Haruki Murakami’s short story into a dramatic and emotionally compelling titan centered on loss, regret, betrayal, sex, and guilt) spends a bit too much time on the play itself as an allegory to the lives of these characters when the dialogues between them all are far more riveting.

Although, it is to be appreciated that the film and Kafuku hire a mute for one of the roles, coincidentally for the character that Kafuku has a sentimental tape of his wife reading aloud the lines for him to practice alongside (before the tragedy, he was preparing to play the role of Uncle Vanya). The creative decision adds a tender and beautiful poignancy to some of the final scenes. Takatsuki (Masaki Okada) also finds himself playing a vital role following a disgraced reputation that goes beyond Kafuku, secretly aware of the actor sleeping with his wife. Naturally, this leads to tense and contemplative discussions that always put character first rather than descending into an overblown shouting match.

Aside from seemingly never-ending impactful and relatable quotes, Drive My Car also utilizes nifty aerial shots to capture the roads traveled, as Kafuku, now requiring a personal driver that comes in the form of Misaki (Tôko Miura) is forced to confront all his pain inside that car. A platonic bond also develops between chauffeur and artist, sharing in their bereavement and guilt. Ryûsuke Hamaguchi is so invested in every one of these characters that it’s a surprise and pleasant revelation when some grow in significance more than others. It’s definitely not an eventful movie, but the characters are so sharply drawn and studied that the intimidating runtime speeds by all the same.

Take Drive My Car for a spin; if you’re not enjoying yourself past or the intrigue the lengthy prologue sets up, then you can tap out, but it’s difficult to imagine someone not taken aback by the poignant writing, rich themes, and everything eating away at these characters.