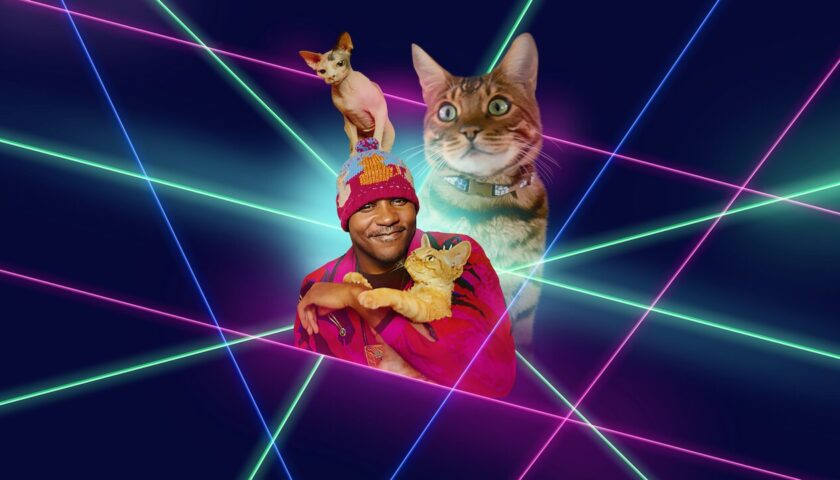 A rap artist, wearing a knit cap it, sets up a live video shoot with a couple of production people.

Cat People, a six-part docuseries developed by Glen Zipper (Dogs), examines six different people who not only love cats, but have made their livings in a way that includes cats. First up is Moshow, the “cat rapper” who has made a living via viral videos featuring at least one of the five cats he shares with his wife M.C. in their Portland home.

Moshow (aka Dwayne Molock) grew up in the projects in Baltimore with his single mother, and he credits “being a nerd saved my life.” He didn’t want to run with his buddies, and when he was doing well in high school, he convinced his mother to move out of the city so he had a better chance to thrive. He never had a pet as a kid. It wasn’t until he met M.C. in college (where he was going for an Information Services degree), and was introduced to her family’s cats that he fell in love — with both M.C. and cats.

They moved to Portland in order to expand his artistic opportunities. He tried to rap about his experiences, but found himself rapping about his cats. He then started creating videos for Facebook and YouTube, featuring all of his cats, from the adorable Lil’ Parmesan to his hairless cats Queen Sushi and MegaMam. He has a black cat named Black Savage, and a cat named DJ Ravioli; DJ’s skin condition means he takes baths, and a video of Moshow rapping in the bath with DJ went viral a few years ago.

Other episodes feature a woman who runs a “cat circus”, an artist who makes 3D cat portraits, a couple who started a cat sanctuary in Syros, a cat who surfs with his human, and a person who raises money for cats in need.

Cat People is a sweet show because the filmmakers who direct each episode not only love cats, but love the people who own and take care of them. What they’re showing audience isn’t a group of “crazy cat people”; they’re showing cat lovers who have not only dedicated their lives to their cats but have somehow made cats their livelihoods. The stories are positive and show how the people profiled have overcome adversity and keep on plugging away at taking care of their cats and showing them to the world.

Samantha Martin, who owns The Amazing Acro-Cats circus, has had to overcome cancer, her tour bus’ interior being ripped apart by a friend who had promised to fix it, and the COVID pandemic pretty much killing off their touring schedule. But as long as the cats are taken care of, Samantha has hope she can keep going and head out on the road soon. The cats no doubt give her that positive outlook; you can see the same joy in Moshow as he raps about his different cats.

They’re affectionate portraits, and it shows cats being loved and, in the case of Martin, even trained to do fun things. If Zipper designed the show to elicit “awwws” and “how cutes”, he certainly has accomplished what he set out to do.