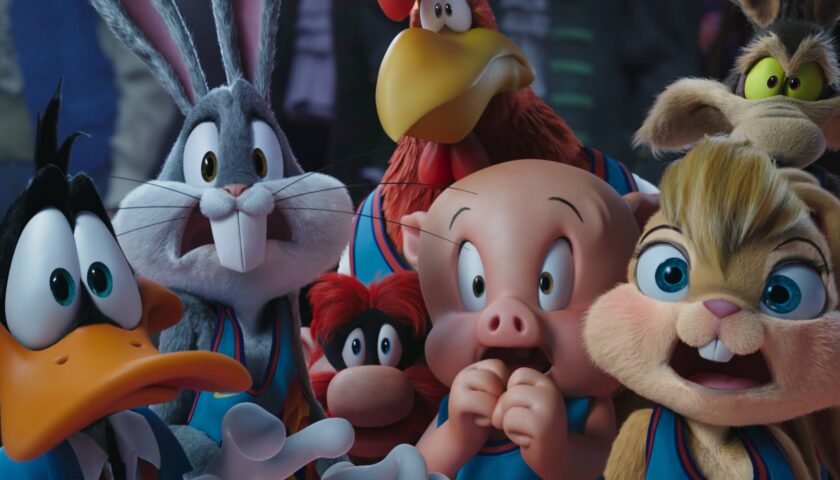 Is it for today’s kids who will froth over Space Jam: A New Legacy’s bright visuals, manic movements, and physical comedy even if they don’t know who Bugs Bunny is?

Is it for 90s kids, constantly seeking a nostalgic connection to their childhood to distract from the burden of adult responsibilities? Or is it for basketball fans and LeBron James completists?

It was clear who the original 1996 Space Jam movie was aimed at – children who grew up watching Looney Tunes most weekday afternoons before screen entertainment became so fractured.

A baffling fan favourite for 25 years, the original film combined the charm of hand-drawn animation with the star power of a basketball legend, Michael Jordan, even if it didn’t have much of a story or any depth to back it up.

If you’ve seen Space Jam recently, it’s a relic from a time before most kid’s movies had to entertain both children and adults. And, if you’re over 12 and not that into a basketball match between cartoon characters and ghoulish aliens, it’s real boring.

Since Pixar evolved our expectation of family movies as being more than just two-dimensional on both the animation and thematic front, Space Jam had to evolve too.

So, in Space Jam: A New Legacy, the fictionalised LeBron James gets a character arc about being a more accepting and fun parent for his son Dom (Cedric Joe) who would rather design computer games than play hoops. It’s predictable but it works – and James is a more charismatic and committed screen presence than Jordan.

LeBron and Dom are sucked into a digital universe by the Warner Bros artificial intelligence Al-G Rhythm (Don Cheadle having an absolute ball hamming it up as the archiest of arch villains).

Al-G is artificial intelligence gone rogue. He wants recognition and respect for his existence and his terrible idea of creating a universe in which everyday people can insert themselves into classic movie scenarios.

It is indeed a very bad idea – and the movie recognises that textually when James says so in a pitch meeting and walks out – but then Space Jam: A New Legacy goes ahead and commits the same sin, over and over.

Not since The Lego Movie, also released by Warner Bros, has there been so much cross-promotion in a movie. It’s a cynical exercise in marketing that makes you want to walk away in disgust.

You wonder how much Warner Bros demanded filmmakers, which included director Malcolm D. Lee (Night School) and producer Ryan Coogler (Black Panther), cram in as many references to WB properties as possible. From Scooby Doo, Harry Potter and DC Comics to Rick & Morty, The Iron Giant and Game of Thrones, they’re all here.

It’s like going on a studio backlot tour. And WB certainly has form but at least in Ready Player One, which was adapted from Ernest Cline’s book, it made sense from a story perspective.

Whereas in Space Jam: A New Legacy, it feels much more as if the story outline was contrived to fit the marketing agenda, so that everything had to take place in the so-called WB Serververse. Otherwise, how are you going to get Mr Freeze, The Mask and Joker to stand courtside?

The only plus-side is when the basketball antics do drag on, at least the adults in the audience can distract themselves by going on an Easter egg hunt for Pennywise, The Night King and Mr Smith.

It’s a shame that the cross-promotion was so nauseating and over-the-top because otherwise Space Jam: A New Legacy has a lot of value.

It’s more entertaining and better paced than the original, the character designs for the opposing team are impressive and it’s even used the Looney Tunes characters in a way that stays true to their legacy while also introducing them to a new generation of kids.

It also wisely chose to animate James for a good chunk of the movie so his character can join in on the zany physical comedy where Jordan had to awkwardly watch on. And Lola Bunny (voiced by Zendaya) has – thank god – been desexualised.

But it’s hard to not feel like you’ve been swimming in some WB marketing executive’s wet dream for two hours, except the real LeBron James didn’t walk out of the pitch meeting like his onscreen avatar did.