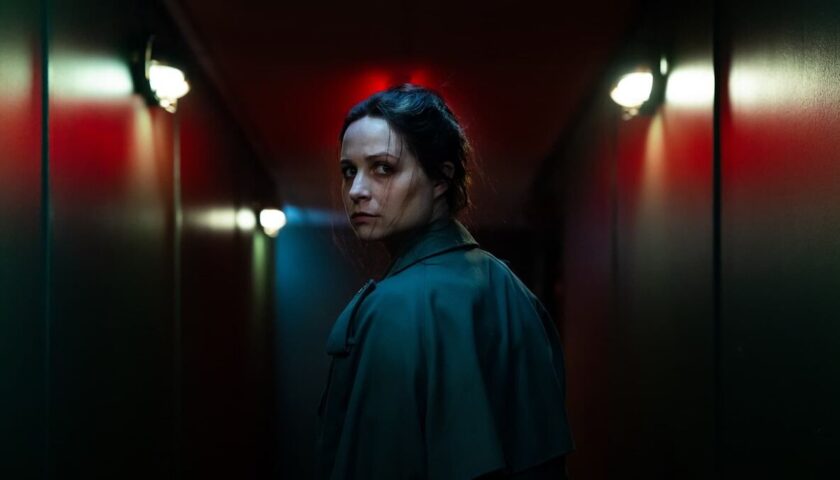 The premise of Prano Bailey-Bond’s Sundance Midnight selection opener is so strong that it’s little wonder the film can’t quite live up — or perhaps down — to it: In a Thatcher’s Britain riven by tabloid-fueled “video nasty” hysteria, a young woman working for the national censorship board is assessing a horror flick, when it triggers sudden flashbacks to a traumatic, amnesiac episode in her own life. Given the ongoing debates around censorship — and its trendier 2020s companion, “cancellation” — and the relationship between screen violence and its real-life counterpart, not to mention the grungy exploitation aesthetic of the no-budget films it references, “Censor” dangles the prospect of topical, ticklish provocation that will prove offensive to some sensibilities. And offense, in a time of pandemic numbness, is tantalizing in itself: at least you’re feeling something.

Initially, at least, “Censor” teases in that direction. The witty opening segues from snowy, degraded-VHS versions of classic Film4 and BFI logos into a scene that wouldn’t look out of place in any one of a hundred ’80s horrors. A terrified teenage girl runs through a forest, tortured by filtered lighting effects, strobey editing and a Carpenter-esque score. A hand clicks a clunky remote and the frame freezes, as the two censors placidly watching, Enid (Niamh Algar) and Sanderson (Nicholas Burns) discuss what’s to be done with the gorier parts (that we sadly have not been shown). The decapitation is fine because it’s ridiculous, claims Enid, but the eye-gouging will need to be cut. Sanderson demurs, pompously citing Shakespeare, Homer and Buñuel as forbears in ocular assault, but Enid holds her ground. After all, she’s already “salvaged the tug of war with the intestines” and “only trimmed the tiniest bit off the end of the genitals.”

This archly amusing exchange tells us a lot about Enid, a bookish type whose prim blouses are always done up to the throat and who takes herself and her job — which she sees as “protecting” a vulnerable public — very seriously. Which only adds to her dismay when she learns that a killing has occurred recently in exactly the gruesome manner of one of the films she was responsible for sanitizing. Worse, she’s been personally identified as the censor involved, and in a painfully plausible early example of misdirected public outrage, tabloid hacks are now encamped outside the office and anonymous callers spew hate into her home phone.

This is promisingly juicy stuff, even though it’s quickly apparent, from the meticulously beige ’80s styling, DP Annika Summerson’s careful, muted compositions and Enid’s solitary, mournful characterization, that Bailey-Bond, co-writing the script with Anthony Fletcher, has designs for a more artful, far less creaky movie than the ones Enid watches at work — more “Berberian Sound Studio” than “Last House on the Left.” And though self-appointed morality wonks like Mary Whitehouse and, of course, Maggie Thatcher drone away on the telly and lurid headlines scream from newspaper stands, soon the background hum of social paranoia — the film’s most original aspect — dies back and a more rote genre-horror storyline comes into focus. A shame, when self-righteous, panicky public scapegoating is more compelling and frightening than the mystery of what happened in the woods one day a couple of decades ago.

Enid’s drab, sexless lifestyle — echoing the slasher archetype of the “final girl” — is at least partly due to her terrible guilt at having blanked out the details of a childhood incident in which her sister Nina went missing, never to be seen again. So the censor is self-censoring, on some subconscious level, but who is she protecting this time, and from what?

Her parents decide at long last to have Nina declared dead, which further destabilizes the already fraying young woman. So it’s hard to say if it’s real or imagined when she starts to believe that her sister lives on, as an actress (Sophia La Porta) who shows up in the latest trashy offering from local horror maestro Frederick North (perhaps a reference to notorious British serial killer Fred West). Oleaginous producer Doug Smart (played oleaginously by Michael Smiley) might be able to provide some answers.

There are some nice subtle flourishes, as when a projector beam turns red implying the bloodiness of the image — indeed Summerson’s excellent framing and moody color blocking is a sophisticated pleasure throughout. And with Saffron Cullane’s precise, subtly heightened ’80s costuming, and composer Emilie Levienaise-Farrouch’s cleverly referential yet non-derivative score, “Censor” is a stylish calling card for all involved, one that certainly demonstrates an impressive level of directorial control for a debut filmmaker.

But that control does sometimes feel like constriction: Until the very end, when we finally get a “ridiculous” decapitation, a nastily Cronenbergian talking wound and a properly deranged nightmare coda (a testament to Mark Towns’ punchy editing), it doesn’t really feel like Bailey-Bond is having as much nasty fun as she could. It’s an irony that “Censor” would probably have passed even Enid’s moralizing eye without cuts, and that a movie set during the “Ban This Sick Filth” moment should be neither sick nor filthy enough to run the slightest risk of being banned. Between this and 2015 short “Nasty,” Bailey-Bond clearly has great affection for the genre, but if a love letter to the cheapie slasher is going to reach its addressee, better it be written in warm, sticky blood.