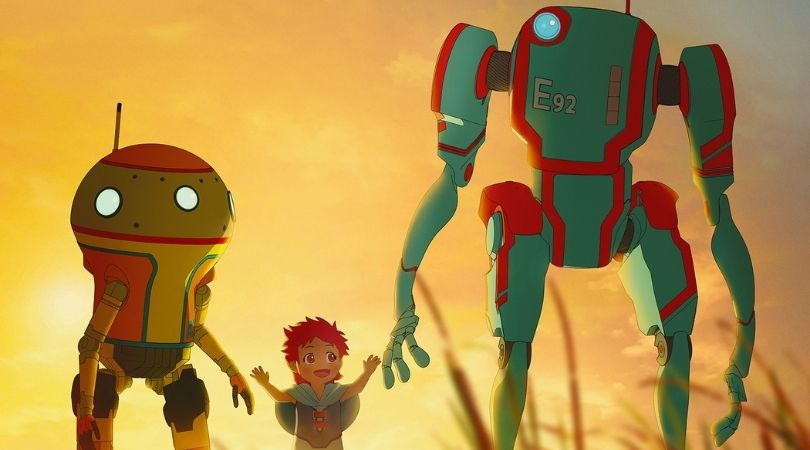 Stories about robot-run futures and/or environmental doom are plentiful in sci-fi, but that doesn’t mean there isn’t room for variation. Case in point, Eden. Created and produced by Justin Leach, the Netflix anime series uses just four, 25-minute episodes to provide its own colorful and poignant take on both of those ideas, and with an age rating that makes it an appropriate and fruitful introduction for younger audiences who are less familiar with its themes.

Along with an equally impressive English voice cast (Ruby Rose, David Tennant, Rosario Dawson and Neil Patrick Harris, to name a few), you’d expect big things from the finished product. And on the whole, Eden delivers. Its premise and setting — a world 1,000 years from when the last human was known to exist — is hardly a new one, nor is the idea of a sole, wandering human (Sara) left to ponder its mysteries. But again, there’s an obvious desire to appeal to a broader audience that supersedes any adult complaints about this; evident in its picture book color scheme and focus on parent/child relationships. That isn’t to say the series shies away from trauma or the weighty, philosophical ideas about the nature of existence that naturally come from these kinds of human-robot fables, either. The emotional and conceptual punches are impactful, without the need for gratuity and convolution.

Like Pixar’s Wall-E, Eden‘s robots have been made humanity’s designated caretakers, even if they’re not quite sure where the humans they were supposed to care for have gone. Sara, discovered in a pod as a baby, is adopted and raised by two robot parents, E92 and A37, who endeavor to keep her hidden from a tyrannical, anti-human ‘bot called Zero. This core relationship is what really hooks you in: As the two parental figures in Sara’s life grapple with what it means to care for an organic life form, and all the illogical idiosyncrasies that come with them, Sara herself has to grapple with feelings of adolescent rebellion and the severe isolation of possibly being the only one of her kind. Many teenagers and young adults feel like no one exists who can truly understand them — Sara’s relatable insecurities are magnified and echoed, inextricably, by being literal truths. Penkin’s score, with its piercing, lonely strings, atmospherically underlines this.

The design and feel of the world she and her robot family inhabit are very well considered for the tone of the story. CG anime remains a contentious choice, despite some fantastic successes (Lupin III: The First and, more recently, New Gods: Nezha Reborn). Naturally, the animation works best for the robotic characters and is a little less successful at fully rendering human expressivity, but if you become fully engrossed in Eden, you’ll soon forget about it. A combination of clever character design, motion and voice acting make the ‘good’ robots personable — akin to the faceless but loveable droids of the Star Wars universe — and the ‘bad’ robots impersonal, and therefore menacing.

Sticking with the Star Wars comparison, the caped Zero, in particular, has more than a touch of Darth Vader about him; his black, angular body cutting a stark contrast against the bountiful, unpolluted setting and the rounder-edged, colorful rebels he seeks to destroy. The cubic obelisk he inhabits, though intended to blend into the landscape with its mirrored walls, becomes more like a Fortress of Solitude or Saruman’s White Tower because of him, a cold and alien object looming over the natural world.

There’s an argument that Eden‘s overall runtime could make it function just as well as a film, and binging the whole mini-series in one go may make it feel as though it might as well be. Segmenting it, however, might be better for younger audiences with shorter attention spans to dip in and out of. It also creates a clear delineation between the four-act structure of the series, the ending of each opening up the past a little more so the viewer can piece together key information alongside its intrepid heroine. By the end, Eden doesn’t quite provide concrete answers to the questions it poses — questions at the core of the robo-pocalypse subgenre — and certain revelations are easily discernable if you’re paying close attention, but, like the aforementioned Wall-E, it works on the most important level — emotionally.