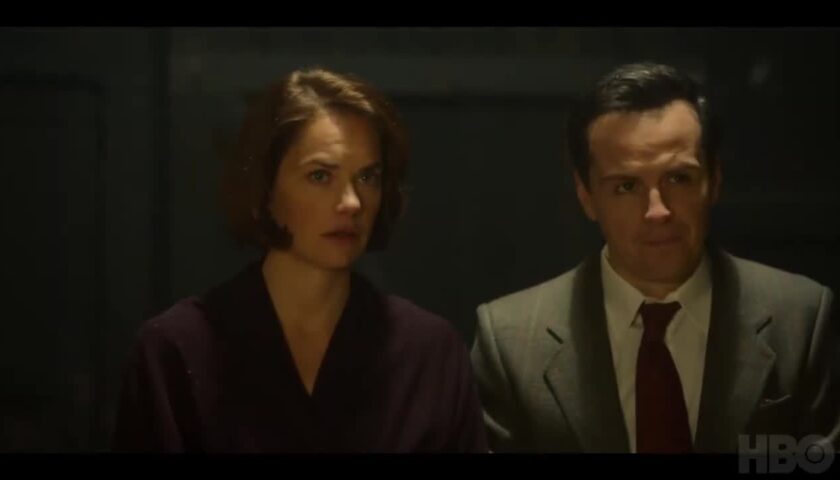 With another flareup of violence between Israelis and Palestinians this month, “Oslo” seems depressingly relevant but also feels somewhat like ancient history.

Coming to HBO and HBO Max on Saturday, May 29, playwright J.T. Rogers and San Francisco-born director Bartlett Sher’s adaptation of their Tony Award-winning play is one of those speculative docudramas about back-channel negotiations that result in landmark treaties. In this case, it’s the early 1990s Oslo Accords, secretly hammered out at an estate in the Norwegian countryside, which marked the first time in almost 50 years that Israel and the Palestine Liberation Organization agreed on anything — or, for that matter, spoke with one another’s representatives.

This resulted in the creation of semiautonomous Arab territories in the West Bank and Gaza Strip, where the parties have kept fighting sporadically ever since. So, despite all the anger and airing of righteous grievances from both sides in this telefilm, its fundamental celebration of cooperation can’t help but feel somewhat hollow.

The same can be said for some of the show’s characters and situations. The way Rogers evolves his main players from a gaggle of Basil Expositions into distinctive individuals is impressive and entertaining stagecraft, but it doesn’t reinforce realism. Differences are settled by such timeworn devices as a walk in the woods (there was another negotiations TV docudrama called “A Walk in the Woods”) or, in a cutesy new wrinkle, servings of delicious waffles. Cynics will cackle when lifelong enemies share a point of common humanity that echoes the most derided scene from the “Batman v Superman” movie.

The actors sell most of this stuff, though, along with lots of information, some of it elementary but much of it steeped in gnarly transactional mechanics. Top honors go to Salim Dau (“Fauda”) as Ahmed Qurei, the PLO economist who spearheaded that side of the secret negotiations. Dau makes him both wily and emotionally volatile, and always riveting to watch. He’s matched on the Israeli side by Jeff Wilbusch (“Unorthodox”), who plays Foreign Ministry Director-General Uri Savir as a rock star.

The non-Middle Eastern point-of-view characters are well-meaning Norwegians, primarily Mona Juul (Ruth Wilson) and Terje Rød-Larsen (hot “Fleabag” priest Andrew Scott). They’re the married junior diplomat and sociologist who dreamed up, then quietly facilitated, the Scandinavian meetings while bigger powers were sponsoring another round of official, going-nowhere talks. Wilson (“His Dark Materials”) comes off, well, very diplomatic, while Scott locates a little humor in a wonk who won’t concede he’s in over his head. They’re not the most intriguing pair, but convincingly appear to be what might have been needed to pull this whole scheme off — to the extent that it was pulled off, which no one could call insignificant.

“Oslo” ultimately acknowledges that the Israeli-Palestinian conflict is anything but resolved, and shows why even this first, limited step toward settling it was so immensely difficult. Whether we’re in the mood to find it entertaining right now remains in dispute.