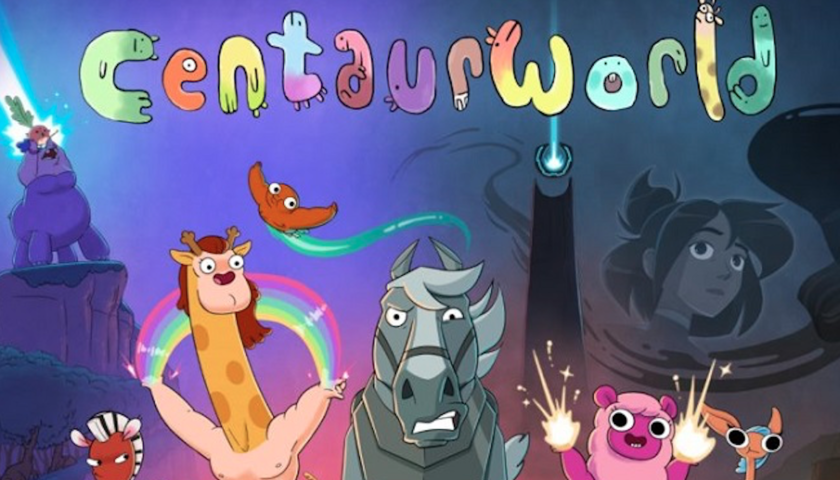 CentaurWorld is a humorous, animated show geared to older kids and young teens. The plot is definitely its strongest point because each episode has unique storylines episodes despite being an ongoing story. Along with that, the acting, impressive characters and music combine to make an unusual, yet intriguing show.

This ten-episode series follows Horse (Kimiko Glenn), her name representing her appearance. She touches a magical artifact that transports her to a new world, called CentaurWorld, where magic and singing are encouraged. Along the way, they meet many challenges, including facing comedy competitions, a trial that could result in being stuck in jail forever and plants that grant tricky wishes. Can Horse find all parts of the key along the rainbow road to make her way home to Rider (Jessie Mueller)?

CentaurWorld has an incredible storyline. The concept is new and unique. Each episode has an individual story that’s carefully written to not be the same as others. The voiceover acting is also magnificent. Josh Radnor, as Durpleton, and Parvesh Cheen, as Zulius, deliver amazing performances. The characters are well developed so the acting and writing make an excellent combination. My favorite part is probably the music, although the other fabulous aspects are great. The songs drew my attention every time; the melodies and lyrics create an emotional environment, shifting with the moods, which always left me in awe. Then there are the impressive singers with their enjoyable resonance and beautiful solos. Their harmonies are perfectly executed and make the songs more enjoyable. The music truly takes the show to the next level.

The message of CentaurWorld is about bravery. Horse and her centaur friends need to find all of the pieces to the key and this journey isn’t easy. Oftentimes, Horse encourages her friends to ‘be bold,’ like when the rainbow road leads them to a hole, going down one side and up the other. Horse shows bravery by jumping down, realizing this is the only way to not give up on their journey. Parents should note that there is some violence and some mildly inappropriate dialogue.

I give CentaurWorld 4 out of 5 stars and recommend it for ages 7 to 13. CentaurWorld begins streaming on Netflix July 30, 2021.