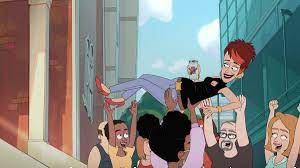 You don’t always appreciate how hard it is to do something well until you try to reproduce it.

That’s a lesson that Netflix is learning regarding F Is for Family, the adult animated sitcom that has aired for years in the critical shadow of BoJack Horseman and Big Mouth. Created by Bill Burr and Mike Price, F Is for Family is coarse as hell, but at the same time, it’s a series with marvelous regional and period specificity, with a raw emotional heart that’s more true to the spirit of the show than its occasional fat jokes and caricatures. Everything that is great about F Is for Family — it isn’t the best of Netflix’s adult cartoons, but it may be the one that found its tone the fastest — can be best illustrated by what failed in the streamer’s Hoops and what is initially so bumpy in the new Chicago Party Aunt.

Adapted by Chris Witaske, Jon Barinholtz and Katie Rich from Witaske’s gag Twitter feed, Chicago Party Aunt very much feels like it’s based on a Twitter feed, meaning that it feels like it probably should have been made in 2011. It also means that even though it masquerades as a character-driven comedy, it’s actually joke-driven at the expense of character and storytelling at every turn, much to its detriment.

Lauren Ash stars as Diane Dunbrowski, hairdresser, Wrigleyville native, legendary Windy City partyer and, well, aunt. As the series opens, Diane’s callous disregard for anniversaries has caused her husband, Kurt (Witaske), to move out. Her blue-collar neighborhood salon has been bought out by a hipster chain (with RuPaul Charles’ Gideon as her new boss), and she’s about to gain a new roommate in her nephew Daniel (Rory O’Malley), a nerdy teen in need of life experiences before heading off to Stanford.

On a weekly basis, Diane’s various appetites mess things up for everybody around her, but she also finds a way to remain ostensibly lovable — viewers may disagree — thanks to her knowledge of Chicago geography and those same various appetites, which include a greater affection for cheap hard liquor, deep-dish pizza and kinky sex than any animated character since Betty Rubble.

I’ve rarely had cause to praise $#*! My Dad Says as either a TV show or as a model for adapting Twitter feeds for TV, and I’m not really going to do it here. But that Twitter feed and, to a lesser degree, the short-lived series based on it had the advantage of being built around a real person and, generally, around sincere advice given with a no-filters twist. It takes nothing away from Chicago Party Aunt as a Twitter feed to say that its humor frequently involves in-jokes about hot beef, Ditka, and sleeping with iconic Chicago personalities, rather than anything that feels drawn from an actual human character. For TV, that formula has been embellished with thick accents — I can’t say anything about any of the show’s vocal stars other than “Yup, lots of Chicago accents” — and colorful animation of Chicago landmarks via the good people at Titmouse.

There’s nothing inherently wrong with that. If Chicago accents weren’t funny, Saturday Night Live might not exist at all. There’s a certain fish-in-a-barrel quality to punchlines related to William “Refrigerator” Perry, traffic on Wacker or the proper ordering of a Chicago-style hot dog. Through the eight episodes sent to critics, though, Chicago Party Aunt offers little to hang those jokes on.

Too often the show consists of local references, funny pronunciations, and then a semisweet ending that fails to land convincingly. The pilot is especially frustrating because it takes way too long to establish a very simple premise and probably could be skipped entirely because it’s not funny. Subsequent episodes are at least somewhat better. A Halloween episode in which Diane and Gideon briefly bond has some good bits, as does an episode built around the Chicago Marathon. The finale, set on Christmas Eve, has an actual narrative structure, setting it apart from every other episode.

There are traces of heart in the show’s central relationship, between Diane and Daniel, but it feels like a struggle to bring the various other pieces of the ensemble into the mix. Diane’s workplace, with Rich and Da’Vine Joy Randolph as her colleagues, is one familiar half-baked sitcom. Her suburbanized sister (Jill Talley) and ultra-boring brother-in-law (Ike Barinholtz) are another. Diane’s morbidly obese son, Mikey (Jon Barinholtz), a baggage handler at Midway, could be a character straight from F Is for Family. And the show is willing to sell out any of its storylines for a presumptive laugh about Diane having had sex with somebody Chicago-famous.

It’s always important to give animated shows a handful of episodes to find their voice and rhythms. Maybe the season finale indicates that the pieces are coming together in a way that, say, Hoops really never did. Maybe you want to wait for Chicago Party Aunt to mellow a bit in its second season, and just catch up on F Is for Family in the interim.