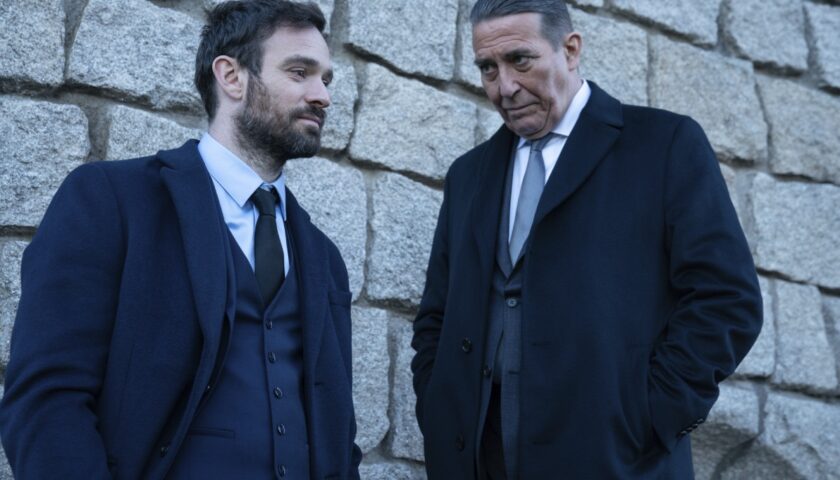 Is there a limited number of possible stories when it comes to gangster dramas? Kin, the newest offering from streaming service AMC+, certainly acts like it. Plot-wise, it’s an entirely paint-by-numbers affair; anyone who’s seen a contemporary tale about mobsters, gangsters, or any like-minded group of relatives who like to keep criminal wrongdoing in the family, will surely see most of the major narrative turns coming long before they arrive. From the inter-familial dynamics to the inciting incident that kicks off a serious turf struggle among warring elements of Irish drug cartels in Dublin, there’s very little here that fans of the genre won’t have seen before. So thank goodness, then, that the show packs its roster with ace character actors and potent, charismatic performers, each one giving their all to this fairly generic material. They make the shopworn clichés sing, once again proving that, with the right cast, even halfway-decent material can come alive.

The show kicks off with the return of a prodigal son: Michael Kinsella (Charlie Cox, in his first lead TV role since the end of Daredevil) has recently been paroled, following his incarceration for some unknown but apparently fairly notorious act of violence. He’s picked up by brother Jimmy (Emmet J. Scanlan), and during a welcome-home party, the somewhat taciturn Michael slowly gets up to speed on the various dealings involving his criminal family, including Jimmy’s wife Amanda (Clare Dunne) and her two teenage sons, his mother (Orphan Black’s Maria Doyle Kennedy), and patriarch Frank (Game Of Thrones’ Aiden Gillen, nicely underplaying as usual), among others. It seems the Kinsella family’s usual mid-level drug operation is being squeezed by local trafficking head Eamon Cunningham (Ciarán Hinds), whose supply the Kinsella rely on, and who is increasingly insisting they operate as essentially an extended wing of his empire.

Frank tries to keep the family and its illicit business out from under the thumb of Eamon, but as the latter’s dealers and enforcers start encroaching on Kinsella turf, there’s not much to be done. Until, of course, Frank’s hotheaded son Eric (Sam Keeley) starts exhorting his dad to do something—anything—to get Eamon to back off their family. Before you can say, “Oh, I think I know exactly where this is headed,” it goes straight there. By the end of the first episode, there’s been a deadly incident that puts tensions between the two families on a hair trigger; by the end of the third, it’s all-out war. By and large, there’s almost nothing even a casual viewer won’t see coming. This is the kind of tale that’s been told many times before, and aside from the Dublin setting and cultural influences, there’s not a lot to distinguish it, narratively.

But the cast is a murderer’s row of fantastic Irish actors, who all bring their A game to Kin. The story is structured in such a way that Cox’s performance, especially for the first few episodes, is largely reactive and often silent, meaning the other performers get lots of chances to dig into their roles—which they do, with gusto. Scanlan exudes a live-wire intensity as Jimmy, uneasily trying to reconnect with his brother despite some messy history between the two, and fighting with his wife over the degree to which their oldest son should or shouldn’t have a chance to join the family business. Speaking of which, Dunne’s Amanda, as Jimmy’s wife and the volatile emotional center of the story, delivers a volcanic performance, expertly sketching in the brittle and left-unsaid aspects of a marriage and family, while contrasting them with the volcanic emotional outbursts engendered by being part of such a dangerous (and precarious) underworld.

But to single out individual performances is almost beside the point, when dealing with such a large and impressive ensemble. Much of the best work is done when these actors are simply allowed to play off each other, raising the stakes of a scene just by dint of sizing up the unspoken anxieties or threats existing in the space between characters, and letting them unfold with artful magnetism. It’s especially a pleasure to watch Gillen and Hinds interact; both of these men could play wily crooks in their sleep at this point, but they seem to come alive with the prospect of generating frisson in their scenes together. The same goes for Doyle Kennedy, who taps a similar vein as her Orphan Black role to suggest layers of manipulative intelligence beneath the domineering force of her matriarch.

Ultimately, Kin isn’t going to reinvent the wheel, or offer much beyond some solid direction and the familiar beats of a mob potboiler. (There is a wrinkle to Cox’s character introduced in episode three that suggests there may be at least one semi-novel element to this story.) Instead, it’s simply an opportunity to watch some gifted actors do what they do, very well, with a story that glides along in entertaining but unoriginal manner. That’s not necessarily a bad thing; as with any action movie or genre touchstone, execution is everything, and thanks to a tremendous cast, the performances keep Kin engaging. And who knows? Maybe a mid-season twist will shift everything; but if not, the actors will hold it down anyway.