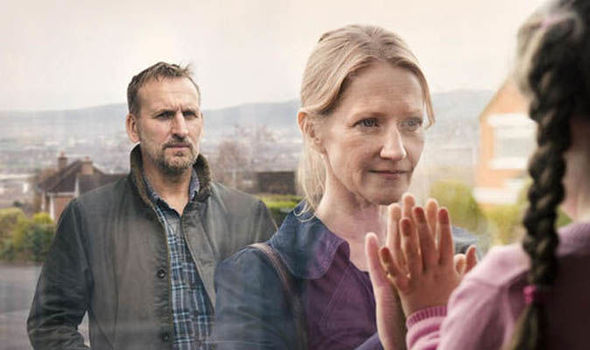 Review: Christopher Eccleston goes soft! It’s up there with Garbo Speaks! as the herald of a new era, but it’s true. In Come Home, he plays – with what an Ulsterman of my acquaintance assures me is an eminently passable Northern Irish accent – mechanic and single-parent father-of-three Greg Farrell. We first meet Greg as he furtively enters and scouts round a house, picking up objects that evoke fleeting glimpses of happy times past with tiny children and a laughing, blond woman bathed in the golden light of memory, before the owners – a blond woman and a dark-haired woman – unexpectedly arrive back and he has to hide himself in the shower. As he awaits discovery, we flash back to two weeks earlier.

There, we discover – during a truly disastrous date with a woman he met online that ends with her icily assuring him that he won’t be needing the condoms that have just accidentally fallen out of his pocket – that Greg is a single parent because, 11 months ago, his wife upped and left him and their children. “Walked out on her home and kids for no reason,” he says, baffled and incredulous. “Or no reason near God enough.”

What is striking about Eccleston’s performance is that Greg is so … normal. When I talk of softness, I mean primarily that the thunderous intensity we are so used to, that seemed to be an intrinsic part of the actor – usually put to extraordinarily good use, but sometimes a focus-pulling distraction – has been put aside to give us a completely believable ordinary man facing unordinary circumstances. Greg is unEcclestonianly (a word that, obviously, I have just made up and promise not to use again unless in direst emergency) hapless, narked, sorrowing, funny by turns, and within the parameters of normal human behaviour rather than a Grand Guignol tortured soul laying every weeping aspect bare. It’s startling, refreshing and great.

As, indeed, is the rest of it (which incorporates a subplot about a new girlfriend for Greg, with a violent husband who has already kicked seven shades out of him once), as you might expect from something of Come Home’s pedigree. It is written by Danny Brocklehurst (who has either written or had a hand in almost everything you have enjoyed for the past 20 years, including Clocking Off and Shameless) and produced by the company that gave us Happy Valley and Ordinary Lies. And it has the wonderful Paula Malcolmson as Marie, Greg’s wife. We meet her after I at least had assumed the pair were vituperatively and wholly estranged (one of those assumptions whose overturning causes you to wriggle with glee and settle deeper into the sofa for a better-quality drama than you had hoped for), when they attend their final mediation session. They have to sign the document dividing their assets. A possible hint of what drove them apart comes when he insists that she read it in full, as advised, before signing. “You don’t get to tell me what to do any more, Greg,” Marie says quietly. Greg rails at her for inexplicably walking out on the family before walking out on the session. “There were reasons,” she says, equally quietly, to the mediator.

I try, in these cases, not to read too much about the programme or watch further episodes (unless it’s being broadcast in one of those funky modern ways and the whole thing has, as I believe the young people don’t even say any more, “dropped” at once). Maybe this is a dereliction of critical duty, but it seems to be at least part of the makers’ intention and of the programme’s appeal (or lack thereof – delete according to taste) to leave the viewer unsure of quite what they’re watching. As yet, I am not sure whether it’s going to be a simple whodunnit – with marriage as corpse, as we find out Why She Really Left and Probably Who She Left Him For; a psychological drama, as we unpick the differing views and experiences two people can have of the same relationship; a deconstruction of modern parenting; or something else entirely.

It matters not. It is all beautifully played and beautifully put together and I am in, totally, for the duration. My sympathies are already torn, but edging towards Marie with every word she speaks. Men, I suspect, will lean the other way. I expect viewing couples to be riven along gender lines the length and breadth of the land. Or else, what’s a marito-parenting psychological whodunnit for?