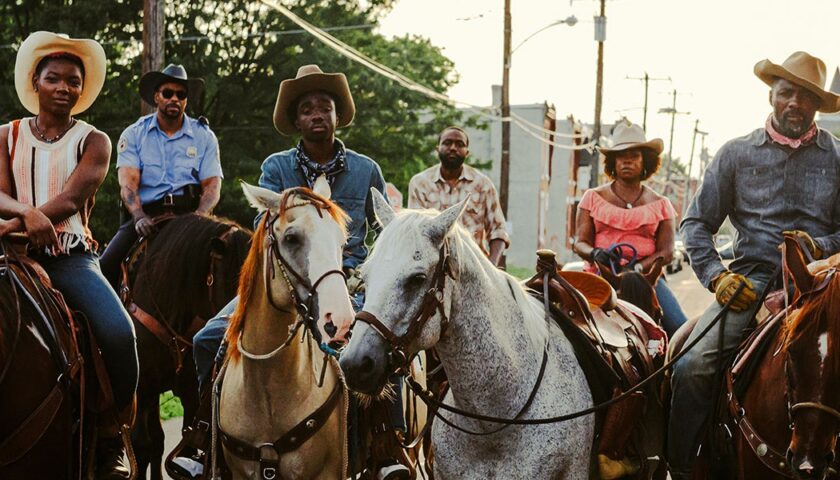 Idris Elba has always been a charismatic screen presence, so it’s no surprise that he cuts a very fine figure on horseback. Elba is the producer-star of this emotionally heartfelt, unusual, if somewhat sucrose urban western. Ricky Staub, the director of several well-liked short films, here makes his feature debut, and with screenwriter Dan Walser he has adapted the 2011 YA novel Ghetto Cowboy by Greg Neri which is centred around the urban-equestrian tradition in Philadelphia, where the Fletcher Street stables have long nurtured young riders.

The Hollywood image of cowboys is white people in stetsons riding around huge open countryside. This film shows us that’s not the whole story: there’s an alternative African-American tradition. Caleb McLaughlin (who plays Lucas in TV’s Stranger Things) is Cole, a very troubled kid in Detroit who has been kicked out of school for fighting. His now desperate mum sends him away to live with his estranged dad in North Philadelphia; this is Harp, played by Elba, who is mostly to be seen gathered round a campfire with his friends in the evening, for all the world as if they are riding the range in a different century to this one.

Harp runs the urban stables — with real live actual horses in the city streets — and he’s a difficult, truculent, suspicious man, astonished to realise he is being asked to step up and face his paternal responsibilities. And he has a lot on his plate: developers and gentrifers are poised to buy out his stables.

As for Cole, he himself is astonished to see that one of these horses actually lives in Harp’s ramshackle house: a situation with comic possibilities that this basically serious film does not want to follow up. Cole doesn’t like the discipline of having to muck out the stables and he doesn’t like Harp yelling at him — Elba’s husky, rumbling voice always so distinctive — and so finds himself hanging out with his old childhood friend Smush (Jharrel Jerome), a superficially likeable, unreliable guy who is into some serious gang stuff. Will moody, vulnerable Cole take the path of drugs and crime with Smush? Or will he take the tougher road of working with horses, the noble beasts who offer a miraculous kind of redemption, and a renewed relationship with his dad?

Well, there are some classic horsey moments here — and I’m a sucker for them — including a scene when it is up to Cole to recapture and pacify one of the most difficult horses which has escaped. Just seeing Elba, McLaughlin and the rest of the cast riding horses around the streets of North Philadelphia, moseying through that tough cityscape, is enough to bring a smile to your face.

The flaw in the movie is how it is going to treat the figure of Smush. The film seems ultimately to want to reclaim Smush, not merely as a troubled kid whose destiny could have been that of so many others, but also as someone with a connection to horses, which has hardly been established by the rest of the story.

This is an old-fashioned father-son story and none the worse for that, but there is something a little slick and subdued about the way the story is resolved.