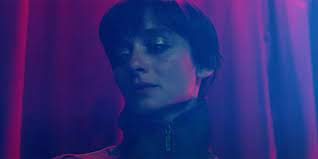 It’s great, and rare, to be presented with a TV show that leaves you wondering for hours and days afterwards if it’s any good. This is something to be cherished, especially in an entertainment world chock full of formulaic drabness built on algorithms, fan service and commercialism.

Copenhagen Cowboy (a terrible title to be fair), even more than Refn’s divisive Only God Forgives, is a death dream with a very loose narrative woven together with a smorgasbord of ideas and styles inspired by the mysticism and folklore from multiple cultures. It’s a dizzying and head-scratching six episodes to which it’s pointless to try to ascribe too much plot or even thematic analysis. Some will argue that there’s just not enough going on to justify any sort of runtime longer than 90mins but the fact is that anyone who hates this is a series would hate it just as much as a movie.

It’s at points breathtaking to behold, and utterly infuriating at others. The reliance on specific shots – static camera, 360-degree pans, slow zoom – is highly effective at points and annoying at others – but everything is calculated to build maximum tension and suspense, and serves to really bring the few scenes that aren’t filmed in this way to the viewer’s attention as being significant.

The technical brilliance in the direction, cinematography and score can’t really be denied, even if it’s not to your taste. Every actor is riveting, especially Angela Bundalovic who as the enigmatic Miu delivers a movingly minimalistic, affecting, and extraordinarily physical performance in spite of her diminutive size.

Love it or hate it, Copenhagen Cowboy is an experience. It’s not style over substance – the substance is by and large the style itself, so if the style isn’t for you then you’ll certainly find yourself at sea. In coming to a conclusion of whether I liked it or not, I realised I could only think of a couple of people I’d recommend it to. And because those people are my favourite people who I trust the most, I figure it’s something I definitely liked and enjoyed. Go make your own mind up…