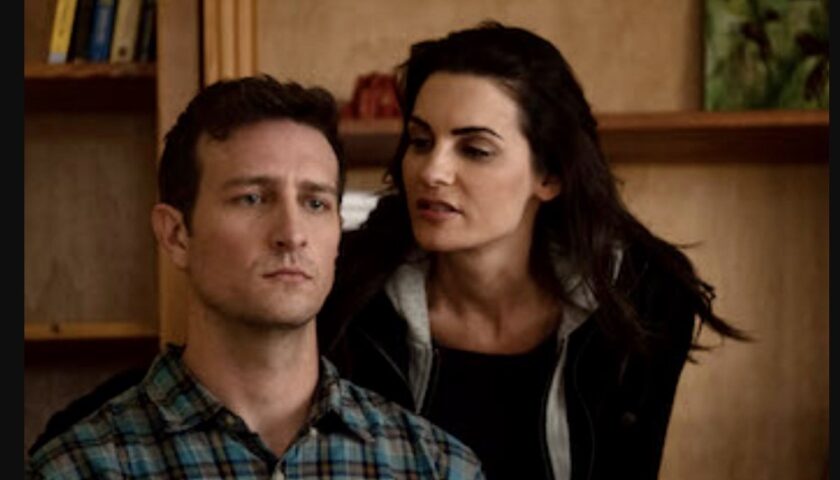 ‘Dangerous Medicine’ follows the chilling tale of Daphne (Leann Van Mol), a physical therapist who forms a disturbing pattern of preying on those with physical disabilities. The film begins with Daphne being chased away by the family of her husband Kyle who was in a wheelchair and being told she needs to get back on her medication. Later in the film though, we see that Daphne continues her pattern after she reads about a young athlete Tony Fox (Chris Cimperman) who gets injured and can’t walk again after an accident.

She offers her services to Tony’s overwhelmed single mother Ellen, played by Meredith Thomas, and soon starts to try and take over Tony’s life. First Daphne alienates Tony from his longtime girlfriend Jasmine (Chloe Stafford) and then she prevents a high-profile doctor who can reverse Tony’s paralysis from getting in touch with Tony. Tony’s mother however gets to know that Daphne hasn’t passed on the doctor’s message and fires her. Tony, however, is still in touch with Daphne and she makes her feelings for him clear and asks him out.

Tony, however, says it’s inappropriate. Daphne doesn’t take the rejection well, and through flashbacks, we see that in the past as well when Daphne was rejected by former patient and ex-husband Kyle, she tried to kill him. We also see that when Kyle’s brother confronted her for her behavior, she killed him and buried him in her backyard. When it comes to Tony, Daphne breaks into the house on a night his mother is traveling and creates a gas leak to try to kill Tony.

The next morning, Daphne goes to ‘check’ on Tony and pretends to create a scene in front of the neighbors where she comes across as caring. Tony, who believes Daphne has saved his life, asks his mother to rehire Daphne and she reluctantly agrees. Just as Daphne thinks she has Tony in her clutches again, the doctor’s office calls and says they can reschedule Tony’s surgery which leads to Daphne plotting again.

On the day of the surgery, she poses as a doctor in the hospital and we see her going into Tony’s doctor’s office. She then injects the doctor with a dose of potassium chloride killing him on the spot. Needless to say, the surgery is canceled and Tony is devastated.

Daphne tries to ‘comfort’ Tony and they end up kissing and sleeping together. His mother catches them in bed and asks why a woman in her thirties is preying on a boy of eighteen, besides the fact that this is a complete breach of ethics. But Tony insists that he keeps seeing Daphne and threatens to move out if his mother doesn’t let him continue the relationship.

In the meantime, Jasmine sees all the pictures Tony keeps posting of him and Daphne and she notices that Daphne’s tattoo spells ‘Kyle’ written in Japanese. She then remembers that Kyle was the name of Daphne’s last client. Jasmine begins to wonder why Daphne has a tattoo of her client’s name. She then starts spying on Daphne and goes through things in her house and finds out from records that her name is Daphne Edwards, not Jones. Kyle was not just her patient but also her husband.

Daphne then calls all the numbers listed under Kyle Edwards to find out more about Daphne. She finally finds the right Kyle Edwards who tells her he knows Daphne and doesn’t want anything more to do with her. When Jasmine asks him why he says that, he says that Daphne and he were married but she was not stable mentally. When he tried to break it off with her she tried to kill him. Kyle at this point is still looking for his brother, unaware that Daphne has killed his brother. Jasmine warns Tony who then confronts Daphne only for her to fly into a rage and smother him. Once she has done that, she abducts him and traps him in an old house her grandfather left her. She is about to amputate his arm in revenge when Kyle’s mother saves him, but not before Daphne attacks Jasmine.

However, the story ends right back where it started with Tony on a race track once again thanks to a surgery by the protegee of his late doctor. We see him being cheered on by his mother and Jasmine who we see has survived Daphne’s attack. The film has a fairly gripping plot but is marred by rather awful over-acting especially by Van Mol. Cimperman’s clueless expression throughout the film doesn’t help either. But still, if you want to live on the edge of your seat a bit, catch ‘Dangerous Medicine’  which premieres on Lifetime Movies on Friday, March 5, at 8 pm ET/PT.