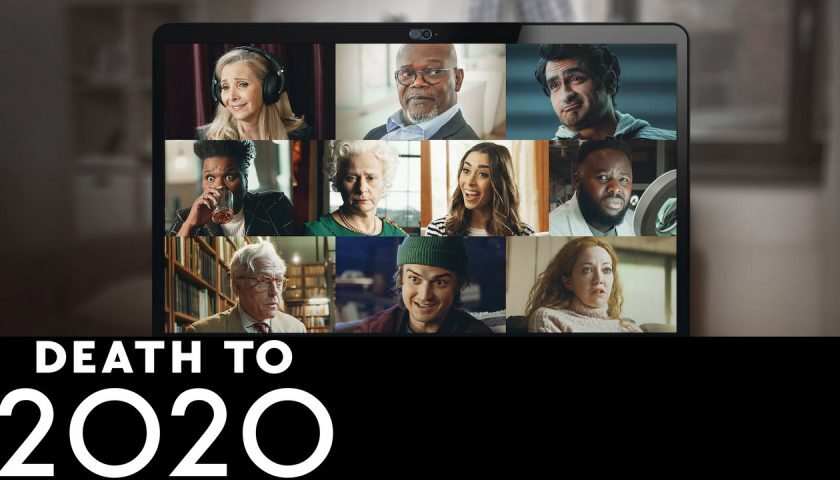 If you’ve spent much time suffering through the news, chuckling ruefully through late-night comedy shows or loitering in desperation on social media over the tumultuous past 12 months, you’ve probably heard somebody — or 15 somebodies — refer to 2020 as an episode of Black Mirror.

I’m sure Black Mirror creator Charlie Brooker has heard those jokes more than your average person. One can safely assume, in fact, that any conversation Brooker has had with any human being during this extended orbit around the sun has included one “Am I the first person to say this?” gag about how the sixth season of Black Mirror has been the most ambitious to date.

You almost can’t blame Brooker for feeling like the world was demanding his perspective on a year people accused him of creating, so with almost no time to spare in 2020, Netflix is releasing Death to 2020, a 70-minute special in which Brooker and Black Mirror collaborator Annabel Jones reveal that…

Death to 2020 is a generally hacky piece of recycled political satire and tired documentary parody reflecting on the year that was in a way that will feel fresh to you only if you’ve self-imposed a strict media blackout since February. If you haven’t, you’ll probably end up wondering why, with 366 days to contemplate punchlines, Brooker has delivered something generally less funny than Trevor Noah and 10 guys named Jimmy did on a nightly basis, John Oliver and Samatha Bee did on a weekly basis, and half of your Twitter feed and Facebook friends contributed to almost second-by-second.

There are chuckles here, but they come almost exclusively from the enthusiasm of an impressively star-studded cast, including Samuel L. Jackson, Hugh Grant, Lisa Kudrow, Leslie Jones, Kumail Nanjiani and Tracey Ullman as Queen Elizabeth.

The most disappointing part of Death to 2020 is that before he became the Emmy-winning chronicler of technological alienation in our modern age, headline-ripping political satire was Brooker’s métier across an assortment of media. And if there’s any worldview tailored for this year, it’s one gifted at looking at the world in macro as terrifying and the world in micro as terrifyingly hilarious.

More than anything, Death to 2020 simply lacks an angle other than to attempt to emulate a dispassionate and generic documentary, combining familiar news footage, fake talking heads and narrator Laurence Fishburne deadpanning his way through observations like, “It’s January 1st and on the day it is born, 2020 seems like any other year.”

By starting in January, Brooker, Jones and directors Al Campbell and Alice Mathias — along with a writing staff that somehow includes 18 names — are able to give superficial observations on a full gamut of 2020 awfulness. So if you think the year was horrible because of COVID-19 and police brutality and a fractious presidential election, you may in fact be forgetting that everything kicked off with fires in Australia and an impeachment trial and even Oscar night (“Disaster strikes for the 10,000 white hopefuls!”).

It’s astonishing how lazy everything is, from the predictable insulting of various high-profile figures (“Presidential and experimental pig-man Donald Trump,” “Prehistoric concierge Joe Biden”) to various familiar moments that surely have been chewed over, digested and pooped out countless times already. Like have you ever seen anybody angrily mocking Trump for that time he sorta kinda suggested drinking bleach might cure the coronavirus? You have? Then get ready for more of that!

One place I’ll give Brooker and company credit is that they know better than to find humor, however caustic, in the murder of George Floyd. So while nearly every other event from the year, even those tied to hundreds of thousands of deaths, is accompanied by a weak zinger, the part reflecting on the summer’s unrest is delivered mostly through Jackson as journalist Dash Bracket, expressing only anger and outrage, as is appropriate.

Grant pushes some unfunny material into light amusement through the force of his comic timing, like how his Tennyson Foss keeps confusing fictional events with actual history. But too many characters almost can’t be funny because they’re less absurd than the real thing, like Kudrow as a non-official GOP mouthpiece whose whole gimmick is repeating that conservative voices are being silenced in a variety of wide-reaching platforms that amplify her voice.

The clear highlights are the “ordinary” people. Cristin Milioti, so great in the “USS Callister” Black Mirror episode, is a wild-eyed delight as a suburban soccer mom and online conspiracy enthusiast named Kathy Flowers. Kathy is prone to calling the cops on Black people she deems suspicious and it’s perhaps the only subtle choice in the entire project that this character, caught in several viral online videos, wasn’t called “Karen.”

Diane Morgan, a veteran of Charlie Brooker’s Weekly Wipe, is even better as Gemma Nerrick, described by the documentary’s director as “one of the five most average people in the world.” Gemma actually seems a little below average as she describes “bingeing” the American election coverage and thinking it’s a frustrating game show. Part of why Gemma is funny is that she has a very specific voice and a very specific perspective on the events of the year, one that resists the by-the-numbers treatment of events we’re accustomed to from late-night TV. I don’t know if I would have watched 70 minutes of 2020 through Gemma’s prism, but I would have known the angle that Brooker was taking and I think I’d have appreciated it.

There’s also a strange beat where Pyrex Flask talks about mastering soul transfer technology and for one minute, you see what the actual Black Mirror episode about the year would have looked like. But whether Brooker was uninterested in actually taking those leaps or just preferred keeping things grounded, it’s a blip and not a consistent tonal choice.

I smiled at a few broad Netflix jokes. I laughed at Ullman as Queen Elizabeth, though only because one could easily imagine Tracey Ullman would have been a spectacular swing as the third Queen Elizabeth on The Crown. But that’s about it.

Once people realize Death to 2020 isn’t actually very Black Mirror-esque at all, but rather just a subpar year-in-review show — in the vein of Last Week Tonight only less sharp — I’m not sure why anybody would seek out this special. Even less so after we finally get into 2021 and are able to leave 2020 behind; it’s unclear why anybody would feel like revisiting the already unpleasant experience.

It’s totally appropriate that the fruit of a year that has felt endless would be a 70-minute comedy special that feels endless. But that’s definitely not a recommendation.