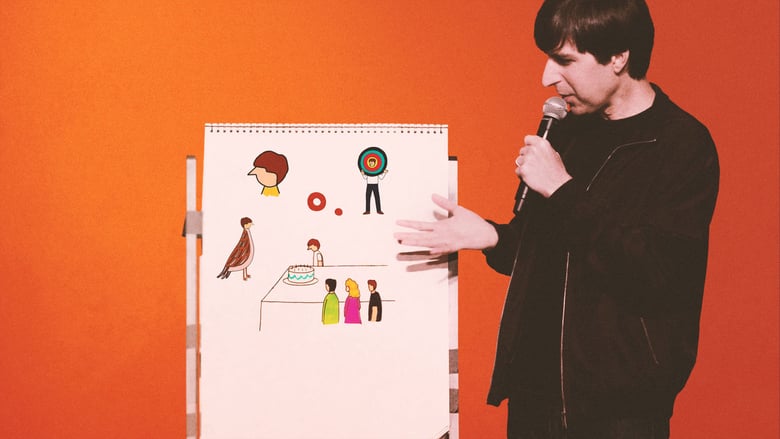 Review: Reminiscent, but memorable in his own right, Martin may sound a little bit like Mitch Hedberg, or perhaps Zach Galifianakis with a guitar instead of a piano, while looking like the Fifth Beatle with his early-60s mop-top.

What sets Martin apart is his eye. His attention to detail, not just as an illustrator of cartoons, but with the camera lens, the split screens, the choice to start his second Netflix special mid-joke or abruptly cut into and out of bits. No wonder he calls his 2018 hour Demetri Martin: The Overthinker. In fact, after that first onstage observation about squirrels, the comedian/artist/actor/writer/director throws his voice offscreen to present director’s commentary, talking us through his thought process, straight through the opening credits, before segueing back to the next joke.

All while the audience at the Moore Theatre in Seattle watches Martin continue his act, or at times, waits for the comedian to snap out of a blank stare.

Yes, he commits to the premise of overthinking his performance throughout the hour. And by employing split-screen to present illustrations as tags to jokes, The Overthinker becomes the rare stand-up comedy performance better taken in at home than live.

Nine minutes of sight gags drawn up on an easel. A musical interlude set to one-liner “fascinating facts.” An act-out about an awkward near-death experience. A bit that Martin teases, only to reject via voiceover narration and cut back to the act. He may high-concept low-brow at one moment; low-concept high-brow the next.

It’s the kind of act that plays better with hipsters. Most exemplified by this crowd cheering a joke in which Martin proclaims his love for sports bars because they’re filled with all of the people he likes least. Although the comedian adds that he wouldn’t fit in there anyhow. “This is not a sports nose. I know what I look like.”

Martin may prefer one-liners or charts and graphs that illustrate the joke right on the page, but in The Overthinker, he also delivers plenty of longer, more traditional examples of observational comedy. What are observational comedians, though, if not over-thinkers? Noticing a sign, a label, a custom we all take for granted and diving deep into critical thought about it.

“I love telling jokes, because there’s something really economical about a good joke,” Martin says here. “It breaks down a lot of ideas into just a sentence or two, you know. And I’ve always loved that.”

Even if he quickly veers off course from there.

As he explains how much has changed in the past decade, from single life in a sixth-floor walk-up in New York City to married with children in California, suddenly the string of observations he had made beforehand take on a different meaning.

His suggestions for dealing with car horns or GPS systems or retail clerks…these are dad jokes!

Then again, I may have put too much thought into figuring Martin out.