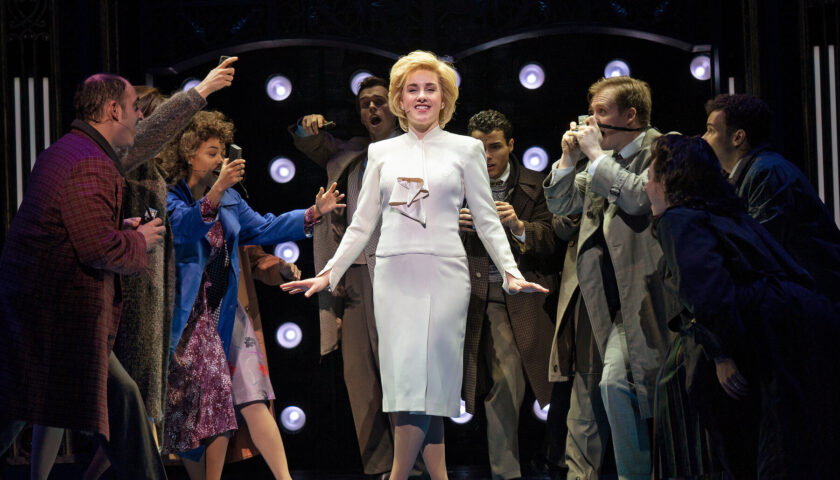 Haters like to attack musical theater for its unreality. No actual person would ever be that way — so over-the-top, so emotive — they say.

Yet in “Diana: The Musical,” the art form works the opposite way on its protagonist, the Princess of Wales. Even during her too-brief life, Princess Di herself could seem unreal, as if always haloed by gauze or haze or the afterglow of flashbulbs. Time has only exacerbated that phenomenon, as the dated quality of photos and the fashion they depict further distance her from us plebeian well-wishers.

So when Jeanna de Waal enters the musical in the title role, which is released Friday, Oct. 1, on Netflix, the effect startles. Diana didn’t always move at the slowed-down speed of a gossamery montage. She flinched and trembled. Eager and earnest, she built too few defenses. She acted out, in ways both foolish and cunning. In short, she was human.

Last September, director Christopher Ashley captured a stage performance of the show at an empty Longacre Theatre, the same venue where the show begins its first Broadway performances Nov. 2. The pre-Broadway Netflix release marks an especially exciting model for those of us who don’t regularly make it to New York to see theater. Instead of waiting for a tour to come to town a year or more after opening night — if it comes at all — we can be all be a part of the cultural conversation about “Diana” at the same moment.

Writers David Bryan and Joe DiPietro are somehow always generous yet trenchant with their rich source material. It’s a fairy tale with a “a pretty, pretty girl in a pretty, pretty dress,” but one with a rotten foundation — a royal marriage less built on love than strategized by cold pragmatism. Even the proposal by Prince Charles (Roe Hartrampf) is worse than ambivalent; it’s grudging, wincing, through gritted teeth. “A future queen should have no past,” sings Queen Elizabeth II (Judy Kaye) — which is another way of saying she can’t be a person. And she’s not the only one; “Diana” makes clear that this whole royal thing is predicated on everyone involved denying their humanity.

While some lines and lyrics ring hollow — one love song that, out of nowhere, busts out “Te amo” and “Je t’aime” feels especially lazy — many are at once epigrammatic yet down-to-earth. “A monarch must give, but not too much,” says Elizabeth, even as she later searches for the self she’s repressed behind her public role: “Whatever became of that officer’s wife?”

“She is what the people want,” sings Erin Davie’s Camilla Parker Bowles of de Waal’s Diana, whom she groomed to be her own rival. Davie’s pellucid voice is without anger; there is only acceptance tinged with wry sadness. The subtext is so clear you can’t help but write a second half of that lyric yourself: “And I am not.”

Of course, it’s Diana’s show, and de Waal especially excels in letting a revelation shatter her countenance. She’s still trying to hold onto a frozen smile, but behind it is panic or rage or emptiness or bottomless hurt. If Bryan’s music is anodyne, like “Schoolhouse Rock” when it tries to rock and seemingly stuck on a tonic chord even when it’s not, de Waal’s voice gives it an edge, with a weathered bellow that wouldn’t be out of place in a Melissa Etheridge torch song.

“Diana” ends abruptly, as the life of its subject did, but here it’s as if the writers couldn’t figure out what to do and just turned off the lights instead of making sense of — or at least saying something about — the senselessness of her death. The rest of the film occasionally leaves you wanting more too — about Camilla and Charles’ relationship; about the parallels between Camilla and Diana’s lover, James Hewitt (Gareth Keegan). But mostly it’s an agreeable desire, one that will hopefully spur more works of art about an endlessly fascinating family.