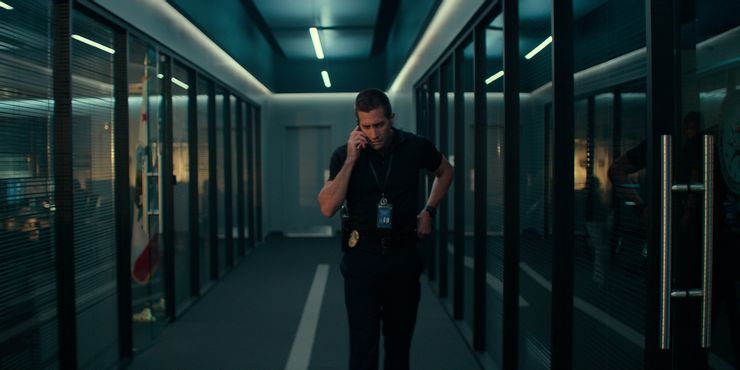 Jake Gyllenhaal has given his share of searing performances in films that premiered at the Toronto International Film Festival, “End of Watch,” “Enemy,” Nightcrawlers,” “Demolition” and “Stronger” among them. But none of them were as completely the Jake Gyllenhaal Show as “The Guilty,” director Antoine Fuqua’s revved-up but tightly-wound adaptation of the 2018 Danish film by Gustav Möller, which premiered at TIFF on Friday.

Sure, there’s a sterling supporting cast that’s seen more than heard, but this Netflix film is a thriller that takes place entirely in two rooms, and most of the time Gyllenhaal is the only person on the screen. If it’s taut and urgent and suspenseful, which it is, it’s because all of that is on the actor’s face and in his voice.

It’s also pretty true to Möller’s film, albeit with a level of gloss and its leading man’s star power. The low-budget original, which won raves as Denmark’s Oscar submission and landed on the shortlist but wasn’t nominated, cost less than $600,000 and was purposefully grimy; Fuqua’s version is high tech by comparison, and it tweaks the ending in a way that you could say is marginally more Hollywood. But it feels similar: A more-or-less real-time race by a 911 dispatcher to figure out what’s going on with a panicked woman who calls from a car where she’s being held against her will.

Of course, this can’t be just another 911 operator on a normal day — instead, it’s a LAPD cop who’s been put on phone duty while awaiting a hearing on a shooting in which he killed a 19-year-old suspect. And it takes place on a day when wildfires are raging across Southern California, blanketing the city with smoke and raising tensions to a fever pitch.

Gyllenhaal’s Joe Baylor is hotheaded, profane (he tells one caller who wants an ambulance after a cycling accident, “Call an Uber and don’t bike drunk, a—hole!”) and clearly haunted; when one character later says “I have blood on my hands!” she could well be speaking for Joe and maybe for most of the other people in the movie.

Joe’s day starts as a series of small annoyances and irritating calls, with Paul Dano making a particular impression (on the other end of the phone line) as a self-important businessman who doesn’t want to admit that he’s been robbed by a prostitute. But things take a turn when he gets a call from a distraught woman named Emily (Riley Keough). At first Joe thinks she’s drunk, until he realizes that she’s pretending to be talking to her daughter because a man has taken her against her will and is driving her east on the 10 freeway.

From there, Emily’s case becomes an obsession for Joe. He gets the LAPD and the California Highway Patrol involved, ends up on the phone with Emily’s 6-year-old daughter and desperately tries to piece together the strands of a case that becomes more tangled and confusing with every new piece of information.

It wouldn’t be right to give away more details than that; what’s important is that we only know what Joe knows and we only see and hear what he does. Apart from opening and closing shots that take in all of Los Angeles, along with a brief, out-of-focus flash of a highway stop that Joe has requested, we never leave the rooms where Joe is stationed: a large, high-tech chamber with multiple 911 stations for operators, a hallway outside that room and a second, smaller room to which he retreats when things get particularly urgent and he wants to handle it himself. (Joe, you might have realized by now, does not play well with others.)

“Broken people save broken people,” says another character at one point – the question is, can this particular broken person save other people and himself? And can he do it by himself, in 90 minutes, on the phone?

One of the points of the original film was that lifesaving decisions are made in dingy, run-down rooms, and the new version lacks the grungy claustrophobia of that setting. Still, the LAPD facilities make for a sleek arena for desperation, and cinematographer Maz Makhani revels in the mixture of bright screens and dark shadows that surround Gyllenhaal. The smaller room is particularly cinematic, with horizontal blinds mean that thin bands of light are cast across the actor’s face.

The voices on the other end of the phone include Keough, Dano, Ethan Hawke, Eli Goree, Da’Vine Joy Randolph and Peter Sarsgaard, among others, and all do fine work. But this is Gyllenhaal’s movie to carry, and his backlog of haunted and feral characters make him an ideal choice to do it, and to make sure we never lose sight of the burden Joe carries. (The movie isn’t called “The Guilty” for nothing.)

Yes, you can question Fuqua and screenwriter Nic Pizzolatto’s decision to set the film on a day of rampaging wildfires; the stakes are already high enough once Emily calls, and having it play out on the worst day ever just makes you wonder why Joe stops getting those other calls. And you can quibble with the details of police actions and the extent to which Joe is able to hear everything that’s happening around the people that he calls.

But Fuqua, like Möller before him, doesn’t really give you time to sit back and think about it. “The Guilty” stays in one place but moves like a tough, efficient action flick; it’s a thrill ride in an office chair.