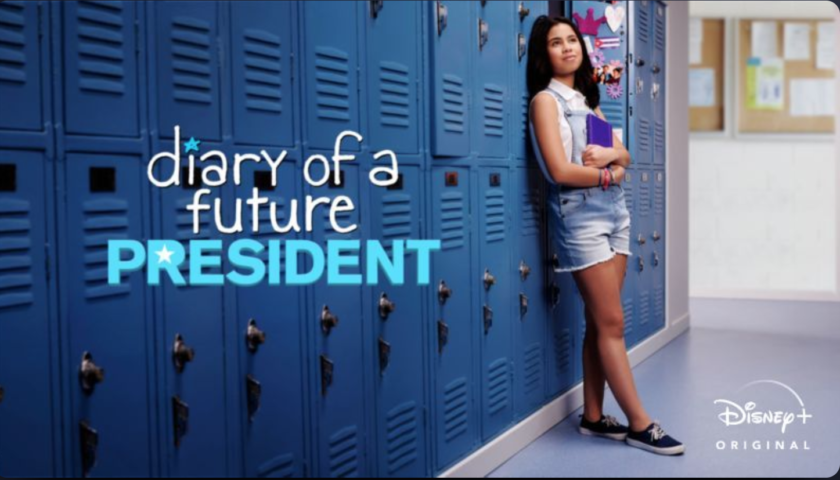 The internet has been abuzz for weeks about what the adorable entity known as Baby Yoda’s real name might be. My hunch? “Plus,” because if you take the “Plus” away from The Mandalorian‘s streaming home, most of the programming is pretty “Disney” — wholesome, well-intentioned and solidly produced, aiming for a generally younger audience.

Ilana Peña’s Diary of a Future President, the first new scripted Disney+ show to premiere since November — and actually the first Disney+ show from an outside studio (CBS TV) — isn’t likely to be a Mandalorian-sized, all-ages sensation, but it’s full of sweet moments, positive messages and an admirably progressive streak, even if marks a bit of a bait-and-switch as Gina Rodriguez’s first post-Jane the Virgin project.

The series starts at some point in the future tied to the inauguration of Elena Cañero-Reed (Rodriguez) as president, complete with Aisha Tyler as her chief of staff. In a package, Elena receives her adolescent diary, sparking a flashback to when Elena (Tess Romero) was a 12-year-old living in Miami Glades with her lawyer mom (Selenis Leyva) and older brother Bobby (Charlie Bushnell). Just starting middle school, Elena is nerdy, bright and open to learning the sort of lessons that will one day take her all the way to the White House.

Let this entirely outside-of-the-target-demo critic lament that the framing device is a small cheat. Rodriguez, who directs the pilot with requisite empathy and a light touch, doesn’t appear again in the five episodes sent for review, nor is Elena’s future status mentioned. I’m not sure the show requires Rodriguez’s onscreen presence or the overt foreshadowing to work, but it’s an odd thing to promise and then move away from.

Diary of a Future President is plenty effective as a heart-warming, occasionally clever coming-of-age comedy that still feels distinctive, even if it might feel more unique if Netflix/Pop’s One Day at a Time hadn’t also been a multigenerational portrait of a Cuban-American family featuring a headstrong daughter named Elena, a white collar single mother and a catchy title song by an Estefan (Emily, in this case). The nature of true diversity, of course, is that we should be entitled to multiple comedies about Cuban-American families, even if they have similarities. Heaven knows the broadcast networks are premiering at least three or four completely identical stories about white families headed by in-over-their-heads parents, but there are definitely things that Diary of a Future President and One Day at a Time have in common.

With the focus on Elena here, Diary of a Future President balances the big and little sagas of being at the cusp of adulthood and yet clinging to vestiges of childhood. It feels like Peña’s experience, not just like a sitcom experience.

There’s a Judy Blume-esque casual candor to the way the series jumps from “girl’s first period” awkwardness to schoolyard crushes to the mortification of running into a teacher shopping for bras, while giving Bobby storylines of his own, some as universal as the pressures of a first relationship when you don’t even know what “second base” refers to and some as specific as when the other kids make fun of the tilde in your last name. That sort of interchange of general and particular is what Diary of a Future President does best. It also has a very matter-of-fact approach to many elements that some shows would want to boast about, whether periodic shifts in and out of Spanish or the fact that Elena’s mother works at a law firm where many of her colleagues are gay — Michael Weaver, as her potential love interest is an exception — and her boss is played, without remark, by Transparent breakout Alexandra Billings.

The capable cast handles tonal shifts well, topped by Romero’s precocious, but not excessively so, performance. Leyva, such a fine component of the Orange Is the New Black ensemble, settles into a vastly different sort of maternal role and has nicely affectional chemistry with Weaver. The deep, expanded cast includes On My Block scene-stealer Jessica Marie Garcia, a slew of good juvenile performances and even the occasional winning cameo like Rachel Bloom (Peña cut her writing teeth on Crazy Ex-Girlfriend) as Elena’s bra-shopping teacher.

Diary of a Future President is much more in the High School Musical: The Musical: The Series vein than a companion to The Mandalorian. It plays to younger viewers primarily, but with its cast and its fresh writing, it can be enjoyed in a minor key by older audiences as well. Just don’t expect much Gina Rodriguez or future-set whimsy.