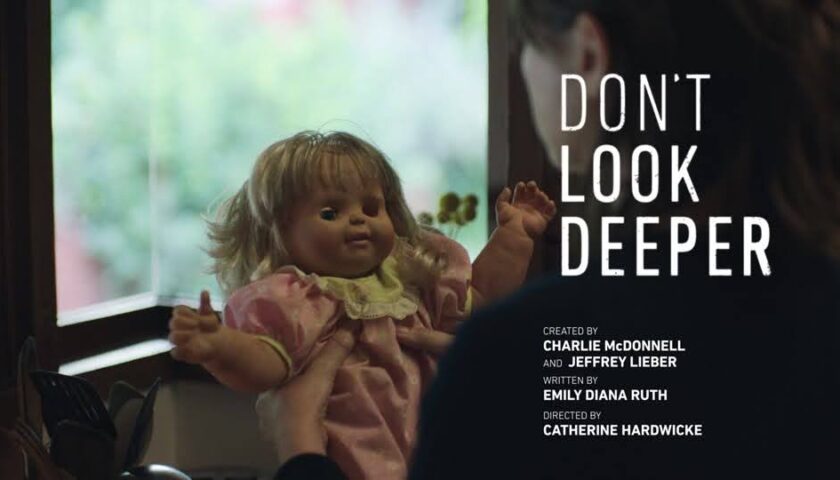 You may or may not have heard of the streaming service Quibi but the service is getting some solid shows including a new science fiction series called, “Don’t Look Deeper”. Film critic Tony Toscano reviews the show and a new horror film now out for streaming on demand.

The time has come; our [email protected] panel for Quibi’s Don’t Look Deeper is here! The new series was co-created by Jeffrey Lieber and Charlie McDonnell, with Catherine Hardwicke directing all 14 chapters. Helena Howard leads the cast as Aisha, a teenager growing up in Merced, California who starts to doubt who she is, raising some serious questions about her past and her parents. Don Cheadle steps in as Aisha’s father while Emily Mortimer plays her therapist, who’s also an artificial intelligence expert.

Yes, there is some very advanced technology involved, but Don’t Look Deeper is essentially a coming-of-age story about a young woman trying to figure out what qualities she got from her parents and what she’s learned on her own. It’s a concept that was inspired by McDonnell’s own fascination with how people are perceived versus who they want to be, something that also deeply resonated with Lieber as a parent. If you’re looking for a series loaded with curious tech that actually feels within our reach at this point, Don’t Look Deeper has you covered. But, it’s also a story that humanizes that tech and the creation of it by exploring its connection to personal identity.

Check out the full [email protected] panel for Don’t Look Deeper with Lieber, Hardwicke, Cheadle, Mortimer and Howard in the video at the top of this article to hear all about their personal feelings on the rise of AI in the real world, what it was like making one of the very first Quibi series, the evolution of the entertainment industry, and so much more!

Quibi is making its way to [email protected] this week to show off an upcoming project that boasts quite the team in front of and behind the lens, Don’t Look Deeper directed by Catherine Hardwicke. The series stars Madeline’s Madeline breakout Helena Howard as a high school senior living in Merced, California who’s got some burning questions about her parents and who she is.

On Friday, July 24th at 12pm PT, we’ll be sharing our [email protected] conversation with Hardwicke, Howard, Don Cheadle, Emily Mortimer and Don’t Look Deeper co-creator Jeffrey Lieber. The conversation is loaded with behind-the-scenes stories, personal feelings on artificial intelligence and more, but do you know what will help you enjoy that panel to the fullest? Going into it having had a look at some footage. It’s a one-two punch of an honor to moderate that [email protected] conversation and to bring you the Don’t Look Deeper trailer, exclusively right here on Collider.

After giving the trailer a watch, you might be able to tell that the material suits Hardwicke’s sensibilities as a filmmaker quite well. During a recent phone conversation, she even laughed and pointed out, “When I read kind of the first draft of the script, I was just drawn in because I love a story about – as is obvious – a teenage girl or a young woman that’s trying to figure out, who am I? How do I fit in the world? What should I become? Am I the cool kid? Am I an artist?”

The young woman in this scenario is played by Helena Howard. Hardwicke noted, “Helena had a beautiful movie at Sundance called Madeline’s Madeline that was kind of inspired by her own life, kind of like saying that Thirteen was inspired by Nikki [Reed].” As we saw with Reed, Kristen Stewart and then some, Hardwicke has a knack for bringing the most out of emerging talent and jump-starting their careers in a sense. What is it that draws Hardwicke to working with young stars like Howard? Here’s how she put it: