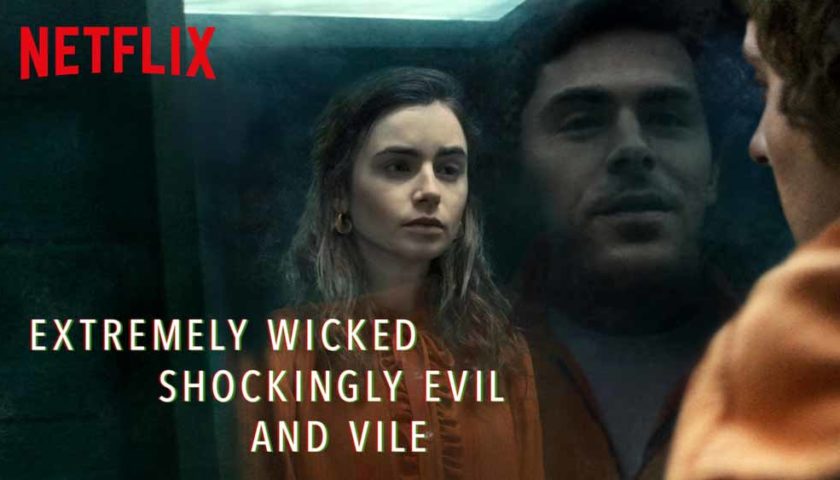 Writers: Elizabeth Kendall (based on the book “The Phantom Prince: My Life with Ted Bundy” by), Michael Werwie

Review:serial killers are the ultimate compartmentalized criminals — the fear and horror they represent isn’t just there in the gruesomeness of their violence, but in the way they pass among us, impersonating normal people. Seen in that light, Ted Bundy was the ultimate compartmentalized monster. He wasn’t the first hideous murderer to become infamous in the media age; that would be Richard Speck, in 1966. But Speck, at the time, seemed a killer out of central casting; he looked like the monumentally damaged cold-blooded demon-creep he was. Charles Manson, likewise, in his zombie-eyed snake-charmer way, was ideally cast for the role of savage hippie psycho.

Whereas Ted Bundy was handsome and “presentable,” with an easy-going all-American grown-up-boy-next-door jocularity. In the key decade of his crimes, the 1970s, when he was caught and put on trial and rose to a new kind of mass notoriety, a lot of people had trouble wrapping their heads around the fact that this guy could have done what he did. But that’s what’s so scary about Ted Bundy. His presence in the world seemed to make a statement: that the most twisted sick puppy imaginable could be just about anybody.

“Extremely Wicked, Shockingly Evil and Vile” is a drama, directed by the veteran documentarian Joe Berlinger, that casts Zac Efron as Ted Bundy, and the movie devotes so much screen time to Bundy’s “normal” side — i.e., the side that wasn’t out bashing, strangling, and dismembering young women — that you could make a case that the film itself is compartmentalizing Bundy’s evil.

The whole reason a movie like this one exists is that a great many people have a fascination with serial killers, an obsession that has spread, in recent decades, to the culture at large. Dramatizations, true crime shows, documentaries like the current Netflix offering “Conversations with a Killer: The Ted Bundy Tapes” (created by Berlinger): It all feeds the lurid maw of that intrigue. But is there something voyeuristic and unseemly about it? Or can the fascination with Ted Bundy that’s tapped by a movie like “Extremely Wicked” escape exploitation to become, in its way, a valid and even moral dramatic impulse?

It all depends on the movie, of course. In my judgment, “Extremely Wicked, Shockingly Evil and Vile” is an honestly unsettling and authentic inquiry into the question of who Ted Bundy was, how he operated, what his capture and trial and ongoing infamy has meant, and what, if anything, his existence tells us about our individual relationship to toxic evil. That said, his story is also freaky as hell, in a jaw-dropping you-can’t-make-this-stuff-up way. It now plays as one of those only-in-the-’70s sagas, like the Patty Hearst affair, where the nation was spellbound by a criminal spectacle that seemed to say something about how the very essence of our communality was falling apart.

So how is Zac Efron as Bundy? I think he’s startlingly good: controlled, magnetic, audacious, committed, and eerily right. With his hair grown out into a sort of Bert Convy ‘do, Efron looks the part just fine, and he uses his insidious charisma to grab us from the start, when Ted, haunting a college bar in Seattle in 1969, meets Liz Kendall (Lily Collins), the single mom who will become his romantic and domestic partner throughout the years of his crimes. Ted is a kind of actor, a maniac playing a role, yet doing it with such sincerity and flair that it’s not just a role. It’s the person a part of him wants to be.

Ted is the sort of ladies’ man who turns heads when he walks down the street. He’s a charmer, a sexy-eyed player, a catch. But he’s a shrewd enough manipulator to know when to play up that image, and to know how to play against it as well. He woos the naïve, fawn-like Liz, who thinks no man could be interested in a secretary with a small daughter, and when he’s in her presence he puts on a major show of being kind, warm, doting, and gentle.

The two fall in love, and from that it may sound like “Extremely Wicked” is soft-pedaling the very notion of Ted’s feelings (did he even have any?). But from what we know (the film is based on Kendall’s 1981 memoir “The Phantom Prince: My Life With Ted Bundy”), this was a genuine attachment — and the fact that Ted, once he gets arrested, lives in trembling fear of the idea that he might lose Liz doesn’t seem far-fetched. The “human” side of Ted is real, and even, at times, a quality we’re asked to identify with. And that in no way undermines the film’s portrait of his warped landscape of interior mayhem. What it shows us, with a shudder, is how he can hide that violence even from himself.

Ted gets accepted into law school and goes to live in Salt Lake City (though he and Liz are still a couple), and in Utah, a cop stops him and spies a suspicious bag in his back seat. He’s arrested, picked out of a line-up, and charged with the kidnapping of a victim he didn’t succeed in killing. And that’s the first act in what becomes the surreal horror circus of his legal odyssey. He is put on trial for kidnapping, and is now vaguely linked to various disappearances of young women in Washington, Utah, and Colorado. But the evidence, from our vantage, is scanty; mostly it’s his beige VW bug, as well as a police drawing of a suspect who looks like him. It’s odd, and dislocating, to see a crime drama set in the late ’70s and to realize that though this was hardly the Stone Age, the cops didn’t have forensics yet, at least not the way they do now.

The dramatic engine of “Extremely Wicked, Shockingly Evil” is Ted’s insistence, right up until the final minutes of the movie, that he is innocent. It’s as if he took a page from the book of some of our sleazier and more sociopathic politicians: Deny, deny, deny. He denies his guilt to Liz so ardently, and so stridently, that she stands right by him, even as she’s drowning her hidden doubts in alcohol. And he denies it to the cops, based on his supposition that they have no definitive evidence, but also on the fact that he’s using the whole Ted Bundy persona — the looks, the charm, the sexy hint of mellow — to imply at every turn: How could I have possibly done that?

The movie takes some hair-raising twists and turns that are, in fact, just what happened — like Ted’s leap to freedom from the second floor of the Aspen, Colorado, courthouse, or his later escape from prison, or the bite marks on one of his victim’s buttocks that ultimately did him in. He’s awfully clever about escaping, less so about what to do when he’s on the run. (He’s still driving his Beetle and, at this point, almost flaunting his homicidal compulsions.) Yet the most strange-but-true section of the movie has to be his murder trial in Florida. Brushing his state-appointed counsel aside, he acts as his own attorney, transforming the court into a theater of the absurd. It’s the first nationally televised trial in America, and for Ted, in his blue blazer and big dark bowtie, that gives him the chance to treat the trial as showbiz. He’s playing the star defendant, and portraying his “innocence,” the same way he fooled his victims: by pretending to be someone he’s not.

Efron’s acting takes wing in these scenes. We see the desperate soul hidden in the psycho hidden in the charlatan hidden in the handsome straight-arrow. Ted’s got more tricks in court than Johnnie Cochran — he’s like the world’s most impassioned used-car salesman. Graced with a judge, played by John Malkovich (striking the one false note in the movie: He seems, frankly, like the last person on earth from Florida), who is at once scolding and indulgent of his antics, Ted now tries to fool the whole world.

Mostly, though, he’s trying to fool Liz, and it’s the final scene in prison, right before Ted is set to go to the electric chair, that gives us the chill the movie has been withholding. It’s a daring choice on Berlinger’s part. His direction, for most of the film, hasn’t been poetry; it’s more like solid prose. Only now, in this penultimate scene, where Liz begs Ted to finally release her by confessing the truth, Berlinger crafts a moment that haunts us, linked to the word that Ted writes on the glass partition. In the entire movie, we have not seen one of his crimes, and now, in the briefest of quick-cut scenes, we do. “Extremely Wicked” doesn’t rub our noses in the horror of Ted Bundy. It shows us just enough, keeping the horror where it belongs, in the recesses of our imagination, where it remains what it should be: dark as midnight, and altogether too much to fathom