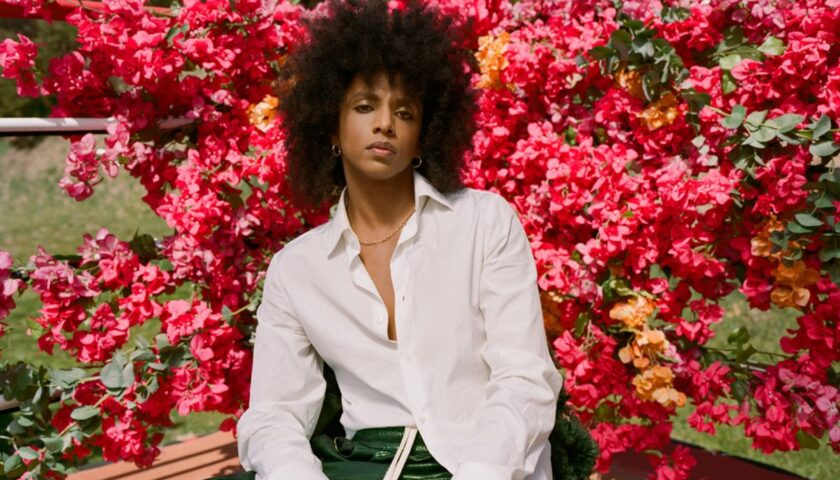 Nearly three decades before ESPN’s O.J.: Made in America blurred the lines between TV documentary series and feature film, an episode of PBS’ Eyes on the Prize was nominated for an Academy Award. That 1987 episode, “Bridge to Freedom,” lost the Oscar to The Ten-Year Lunch: The Wit and Legend of the Algonquin Round Table.

I mention this mainly because that Oscar was pretty much the only thing Eyes on the Prize lost. Henry Hampton’s 14-hour chronicle of the civil rights movement won Emmys, a Peabody and the TCA Award for program of the year. Between regular encore airings on PBS and a sequel that was nearly as acclaimed, Eyes on the Prize became a foundational text on the way we view that period of history and its featured players, as well as a staple of classroom lessons for multiple generations.

The title of Sophia Nahli Allison’s Eyes on the Prize: Hallowed Ground, premiering on HBO Max, has at least two meanings. “Hallowed ground” here refers to the intersection of historical and spiritual significance that imbues locations tied to tragedy — sacred spaces that, as one talking head observes, include basically anywhere the Black American experience has been built. Then, of course, “hallowed ground” surely refers to Eyes on the Prize itself, the sacred text upon which so much discourse has been built.

Approaching Eyes on the Prize: Hallowed Ground in both its titular meanings, it’s important to know what the 61-minute film is and perhaps just as important to know what it is not. The second Eyes on the Prize series took the conversation on the civil rights movement into the mid-’80s. There’s no question that we’re past due for a continuation of that conversation in the format Hampton established, one prioritizing archival footage and invaluable interviews with participants and witnesses while they’re still available to recount their stories. This, to be perfectly clear, is not that sequel or continuation.

Eyes on the Prize: Hallowed Ground is probably best described as a video essay presented in tandem with the original documentary series, in all ways more experimental than Hampton’s work, which was more innovative in subject matter than aesthetic approach. Allison’s project certainly isn’t inaccessible as a stand-alone, but it just as certainly is an emotional and an artistic response to Eyes on the Prize, a provocative call to action for what the next foundational text should do.

It isn’t pure iconoclasm, mind you. Allison and her interview subjects acknowledge and embrace Hampton’s film, which is well represented here in both clips and outtakes and in shots of the shelf after shelf after shelf of film canisters containing original interviews, some of which still need to be digitized for posterity. As the film puts it, Eyes on the Prize “changed the way Americans remembered the civil rights movement.”

But that doesn’t mean it’s definitive. As many voices as there are in Eyes on the Prize — Hampton wanted to focus on people in the struggle, not only the iconic figures — Allison accentuates the ways it marginalizes or omits some stories. She’s concerned with the places where the 1987 series falls short in its treatment of female voices and where it neglects queer and trans voices in the vanguard. Those voices are prioritized in Hallowed Ground.

Allison’s subjects range from young figures from the frontlines of the modern movement to academics to fellow artists. Standouts — some of them sure to be familiar to anybody choosing to watch this particular doc, others stepping into a new and well-deserved spotlight — include Kayla Reed, Prentis Hemphill, Tarana Burke and Brittany Ferrell.

Allison’s film focuses on the continuity of history. Organizers and activists in the ’90s were fighting the same battle as the pioneers featured in the first doc, and so were those in Ferguson, Missouri, and in 2020 protests reacting to the killings of George Floyd, Breonna Taylor and Ahmaud Arbery. Her approach to this sense of continuity is poetic, driven by moments of African-inflected modern dance and by an embrace of colorful, impressionistic tableaus meant to contrast with the gritty black-and-white newsreel style that fueled the original.

As a realistic series, Hampton’s often focused on misery, whereas Allison prefers to focus on the imagination and artistry that can come from pain. The filmmaker’s website specifies, “Do not inquire about stories regarding Black trauma,” and she draws that line in her response to Eyes on the Prize. A dancer before a bonfire in a field might evoke certain traumas, but they’re not explicitly represented. Images of four Black girls playing in a church might be directly tied to the tragedy in Birmingham, but Allison doesn’t need to restage a bombing to make that point.

Sometimes she’s subtle, as in the flickering glimpses of Trayvon Martin’s face over footage of a young boy wading in a river as an interview subject refers to Emmett Till as the universal child. At other times Allison perhaps overexplains, rather than letting viewers grasp who the girls in the church are meant to represent.

Allison has set herself a difficult three-pronged task, especially hard to achieve in just an hour: She aims to create a modern art film in the Marlon Riggs/Cheryl Dunye vein, to offer a bold intellectual thesis as in HBO’s 2020 adaptation of Ta-Nehisi Coates’ Between the World and Me, and to provide an all-encompassing echo of the much more traditional Eyes on the Prize. I don’t know that she’s completely successful. Still, Hallowed Ground is full of moments of beauty and moments of coiled rage. Its questions about which stories were being told 35 years ago, whose stories were being told 15 years ago — and the styles in which those stories were told — and its points about whose stories need to be told today are worth considering and continuing to interrogate, rather than accepting that Eyes on the Prize was the alpha and omega.

Hallowed Ground moves fast and powerfully and leaves room for discussion. The value of Eyes on the Prize as an educational film to be wheeled into classrooms as part of the audiovisual cart — yes, I live in the ’80s in my brain — hasn’t changed, and having that series available on HBO Max is a tremendous leap forward in access. It doesn’t mean that complementary texts aren’t needed. I’m finding a lot to admire in the more confrontational approach taken by the HBO family recently with Hallowed Ground, Between the World and Me and Raoul Peck’s Exterminate All the Brutes.