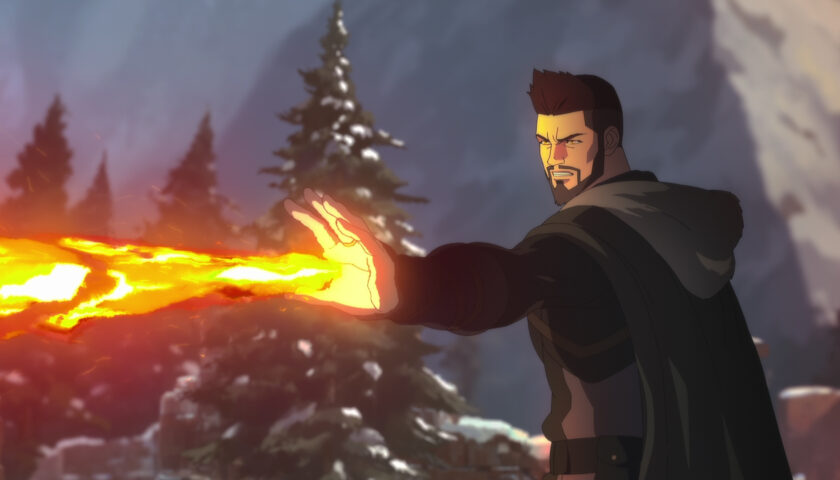 Writers: Andrzej Sapkowski(based on the book series The Witcher by), Beau DeMayo

As confusing as the fractured timeline of The Witcher‘s first season could be, one advantage it offered was an immediate sense that the show’s fantasy universe had history and scope — that it contained other times or places or people who might be worth exploring beyond their relevance to our protagonists.

The show’s first spinoff, the animated movie The Witcher: Nightmare of the Wolf, takes advantage of that broad-mindedness, delving into the past for a chapter about a previously unseen character called Vesemir (Theo James). Fans of the franchise may recognize the name as that of the man who trained Geralt, the lead character played by Henry Cavill in the show. But Nightmare of the Wolf asks us to care about Vesemir on his own terms, and mostly it succeeds. While the film is unlikely to hold much appeal for Netflix subscribers who never cared about The Witcher to begin with, it’s a worthy side quest for anyone with a passing interest in seeing more of the Continent.

The script by Beau DeMayo, who also works on the live-action series, follows the basic outline of one of Geralt’s monster-of-the-week storylines. Vesemir, a witcher (i.e., a monster hunter for hire), is tasked with tracking down a deadly creature that stalks the woods bordering the kingdom of Kaedwen — even as a lady (Mary McDonnell) and a sorceress (Lara Pulver) within the court argue over whether to get rid of the witchers themselves, and even as it becomes apparent that the monster’s true provenance holds horrifying implications for the world Vesemir knows.

As a hero, Vesemir fits neatly into the “lovable rogue” archetype, and James brings enough warmth to his delivery to keep the character’s ever-present smirk from calcifying into a sneer. He quips at monsters while slashing at them, disdains adorable moppets in need of salvation, and takes equal pleasure in collecting coin and in spending it on booze, fine food and, of course, hot baths. But naturally, there’s more to him than meets the eye, and Nightmare of the Wolf quickly sets about excavating his childhood through lengthy flashbacks.

Vesemir, we learn, was a servant boy whose chance encounter with a witcher named Deglan (Graham McTavish) inspired him to become a witcher himself — a rare choice in the Witcher universe, where most witchers need to be forced into the profession because it’s considered so dangerous and distasteful. The hows and whys of his decision elevate Vesemir from a character who’s fun to watch to one who’s easy to care about, and they’ll prove essential to the deeper emotions driving the story in the present. (They also touch upon the themes of intolerance and self-preservation that Nightmare of the Wolf likes to explain to anyone who’ll listen, but the film works better as a character study than as a profound analysis of the values of either this universe or our own.)

The problem is that these scenes are also a drag on the pacing of the first half of the movie, cutting in right when the plot seems to be picking up. Moreover, voice actor David Errigo Jr. struggles to bridge the character’s hardscrabble origins with his debonair adult persona, resulting in a young Vesemir who’s more bratty than bold. The childhood scenes do have their charms; there’s a training sequence in a neon-green swamp that’s more unsettling than the more explicit violence of the film’s battles. But it can be hard to shake off the impatience to just move on and return to the present already.

Then again, nothing lasts that long in Nightmare of the Wolf anyway, given its 81-minute run time. And all that groundwork does pay off in a breathless third act packed with bloody thrills, tragic twists and even a touch of romance. Director Kwang Il Han and Studio MIR bring Nightmare of the Wolf to life with an anime-influenced style that, while familiar (the studio is also responsible for Avatar: The Legend of Korra, among other hits), echoes its hero’s elegance and efficiency. Action scenes capitalize on the flexibility offered by animation — expect lots of drama, plenty of blood and a healthy disregard for “realism” — and occasionally achieve real beauty, as with a fight that flies over a bruised red sky.

With its slim self-contained arc, Nightmare of the Wolf is no substitute for a new season of The Witcher — but it’s all the better because it’s not trying to be. Sure, there are connections to be found for those inclined to look. Vesemir’s backstory offers hints about Geralt’s own, and it’s a safe bet that some of the names mentioned in passing here will come up again later. But by resisting the temptation to tie its fate too closely to Geralt’s (or to any of the series’ main characters’, for that matter), Nightmare of the Wolf serves up a satisfying peek at a universe that always seemed richer than any one story.