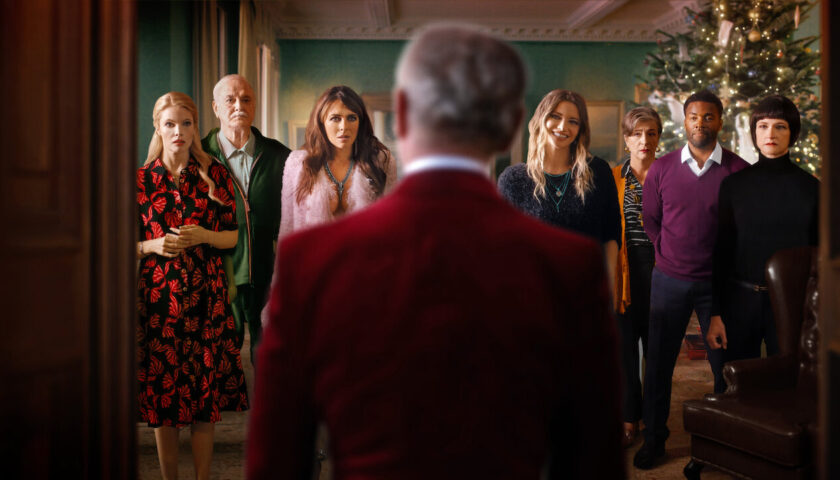 It’s Christmas time and Caroline Christmas (Nathalie Cox), married to Peter (Kris Marshall) and with two children, wants to organize the perfect party in her Yorkshire mansion with her mother (Caroline Quentin), her uncle John (John Cleese) and three sisters: Joanna (Elizabeth Hurley), a fashion editor who is accompanied by her new boyfriend, Felix (Ray Fearon); Paulina (Naomi Frederick), a reserved woman who has spent years preparing a thesis on the Beatles; and Vicky (Talulah Riley), the youngest of the three, happy to change boyfriend and not get engaged.

All of them, estranged, share their dislike for their father, James (Kelsey Grammer), who abandoned them twenty-seven years ago and now resides in Miami.
To his surprise, James shows up at the mansion to spend the Christmas holidays with his young American girlfriend, Jackie (April Bowlby).

British Christmas comedy that brings together an eccentric family in conflict in a mansion to spend the holidays, so prone to argument and / or jokes.

Its choral story, with a screwball approach and some parodic stroke, does not lack some fortunate moment of comedy with the struggle between sisters, between sisters and father, with the peculiar characterization of characters, with the “alien” surprised at the uproar of the family in constant fight …

However, the film, which takes place almost entirely in a large English mansion and is known in some countries as “Father Christmas”, falls apart when it is oriented in its final stretch to a hybrid between the forced and the obvious to agree in a predictable way their “very happy” family solutions.
Well… it’s Christmas.

To highlight some interpretations and characterizations, especially that of April Bowlby as Kelsey Grammer’s pizpireta girlfriend, or that of Nathalie Cox as the hostess in eagerness for everything has to be perfect. Comedies tend to alter this desire as a basic humorous key. Nor is Ray Fearon wrong giving affability to a minor character.