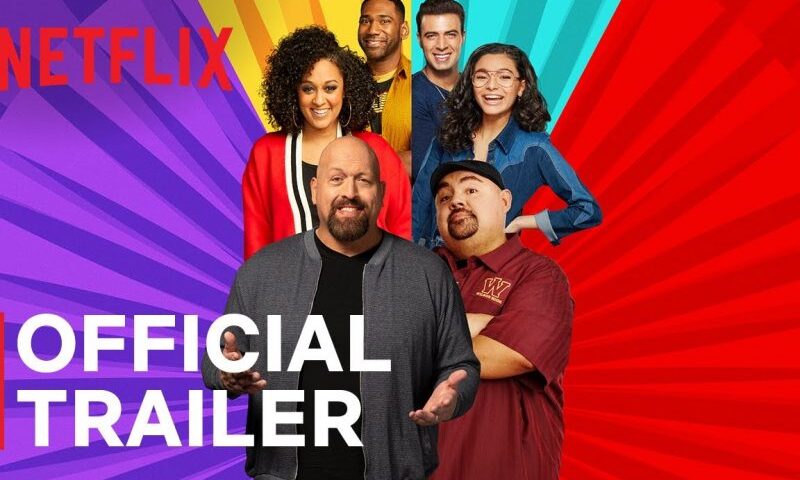 Remember those days of being introduced to Netflix and finding a treasure trove of series like Stranger Things, Peaky Blinders, Black Mirror, and a whole universe of innovativeness that you had earlier not discovered? Then you slowly peeled back the layers of this onion and realized that the platform, too, has series which are less than average and still continuing. Well, what happens when the streaming giant decides to merge two okayish, one average, and one almost good series- Game On: A Comedy Crossover Event nobody asked for happens.

There were days when we look back upon our Disney-loaded childhood and remember our boundless excitement at the mere sight of Hannah Montana in an episode of The Wizards Of Waverly Place. Our imagination, where the worlds of Hannah Montana and Waverly Place were very real, would take off like “Woah! Are Hannah and the Russos neighbours?!” Yeah, those were the good old days and Disney knew how to pull off the crossovers or maybe we were just that easy to please.

Netflix, which is always up for trying new tactics to reel in more subscribers than its mammoth platform already has, decided to the go the 2000s Disney way with its latest Game On: The Comedy Crossover Event. The four episodes bring together the following Netflix sitcom web series- Mr. Iglesias, The Family Reunion, The Big Show Show, and The Expanding Universe Of Ashley Garcia. In short, series which are not fitting well in the binge era and are better suited to drop as weekly episodes came together, pitched one or two of its characters in the next show bringing about a new-age crossover special centred around the spirit of competition and giving your best without worrying about winning or losing.

With The Big Show Show, we have The Big Show and his daughters coming together to help Cassy win a rather silly game and trumping over her archenemy whom she calls her best friend to her face. While exaggerated troupes, slapstick comedy, and some really tired writing bring down the entire episode, the family bonding exudes some a genuine warmth that kinda makes up for it, at least a tiny bit.

In Mr. Iglesias we have Gabriel Iglesias teaching his class the virtue in no cheating to ace their SATs which results in some genuinely hilarious conclusions drawn by his class of smart but habitually notorious students. With The Expanding Universe Of Ashley Garcia, we get Victor and Ashley competing to reclaim their rights over an ancestral burrito recipe from arch-rival Gia (Eva Longoria, who has all chances at acing a cheerleading career after this).

Last and thankfully the least was Family Reunion, where the McKallens came together to beat the McCoys- two equally overly-dramatic set of families- at the decades-old Columbus Country games, the source of rivalry between the families. Filmed before live audience, even their cue of forced laughter can’t make one ignore the presence of any quality comedy.

So, even if you are just a fan of Mr. Iglesias, rest assured that the presence of the remaining sitcoms may annoy you but won’t take away the tiny 30 minutes treat Gabriel Iglesias might bring you.

But the fact remains that Game On: The Comedy Crossover Event doesn’t really manage to promote its core message and fails to create the hoopla it intended to spark.