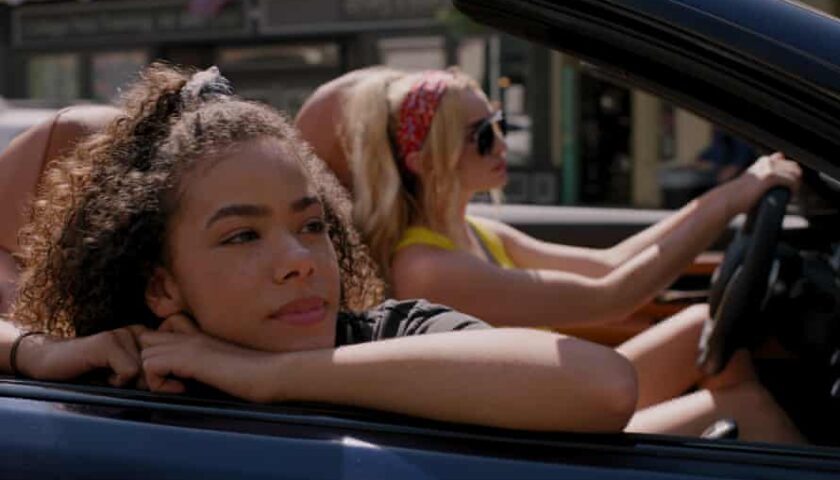 Netflix’s latest drama sounds like a modern reboot of Gilmore Girls — single mom Georgia raises teenage daughter Ginny in a picturesque New England town. (In the first episode, Georgia does actually declare “We’re like the Gilmore Girls — but with bigger boobs!”) But the series does a little more than that. In fact, it does a lot more than that, pulling in the class conflicts of Little Fires Everywhere, the rebellious teenage narrative of Euphoria, and also a Bonnie and Clyde-esque backstory. And that’s just scratching the surface of everything jam-packed into Ginny & Georgia.

The show juggles so many separate big plotlines that it feels like five separate shows vying for attention. If the writers trimmed away one or two, the mother-daughter tension at its core could shine. But with so much going on, that dynamic gets lost.

Oh, and also, Georgia is running away from a shady past where she was part of a motorcycle gang and robbed gas stations at gunpoint! And her dead husband’s ex has sent a PI looking for her! Fun!

It’s a lot, and that’s without even mentioning the huge cast of minor characters. Some, to their credit, are unique, fleshing out the picturesque town and giving it more character. Ginny’s friend Max (Sara Waisglass), for instance, perfectly encapsulates a high-energy, unapologetically herself teenager, with all the intensity of a Monster Energy drink. Soft-hearted diner owner Joe (Raymond Alback) — who shares a past connection with Georgia he’s unaware of — builds a compelling friendship with her. But others, like Mayor Paul’s assistant Nick (Dan Beirne) and PTA mom Cynthia (Sabrina Grdevich), exist to just be tired stereotypes (Token Gay and Karen, respectively). The rest fall somewhere in the middle — they’re sometimes-compelling, sometimes-superfluous fluff, just adding more conflict to an already-packed show.

Ginny and Georgia’s lives are clearly dramatic enough — and certainly, while these overwhelming problems could stand to be streamlined, they could also comfortably fit into the series’ 10 hourlong episodes. But unfortunately, with the overwhelming cast, they barely get time to interact since they’re off diving into other people’s problems. Sometimes side characters simply need to be side characters, without the same complex plot arcs as the central leads.

There are threads of good tension. Ginny is highly frustrated with her mother’s secrets and vagabond lifestyle, while Georgia is annoyed that Ginny doesn’t understand the sacrifices she makes for her kids. There are glimpses of the functional side of their relationship: Ginny and Max lie to their parents about going to a movie, when really they’re meeting up with friends to smoke pot, but Ginny tells Max that her mom will know what’s up. Sure enough, Ginny comes home to Georgia waiting in her bedroom — not to scold her, but to ask Ginny she had a good time, tell her about her own experiences, and remind her daughter that they can freely discuss anything.

But even though they share a sweet moment, Ginny hides the fact she had sex for the first time from her mother, still upset at Georgia for her overly carefree attitude and for uprooting the entire family once again. It speaks to the misunderstanding of mother and daughter relationships — made all the more complicated by the specific issues Ginny and Georgia are dealing with.

Brush away the minor characters’ laundry list of problems — and even the more superfluous issues Ginny and Georgia have with each other — and the series centers on a strong conflict built on a complex relationship. Navigating a difficult mother-daughter relationship is already ripe for dramatic potential, and without the overwhelming pile of obstacles, there would be a chance for the two complicated women at the core of the series to come together and try to understand each other. There’s catharsis in stories about broken relationships mending, and compelling drama in watching them get even more broken first. But unfortunately, with so much going on, and episodes that often feel like several different shows stitched together, Ginny and Georgia don’t spend enough time interacting. They’re right there in the title together, but their series buries their relationship so deeply under other details that it’s hard to dig them back out.